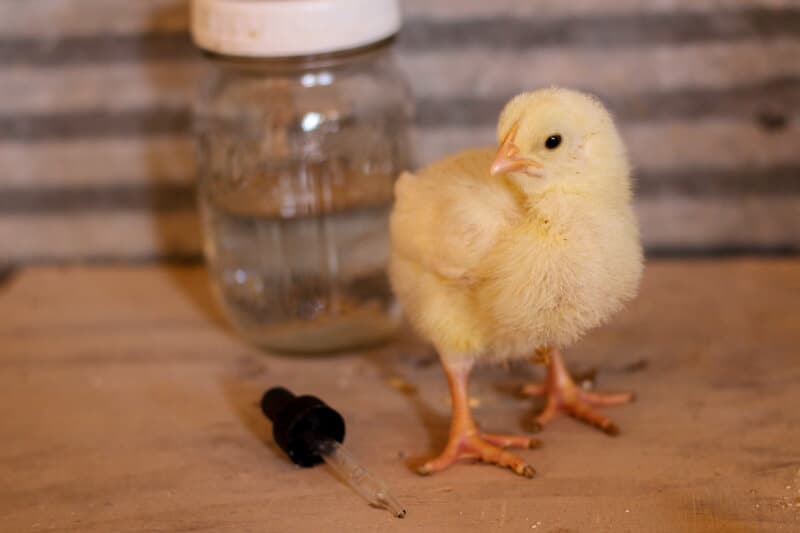 I went from excitedly running around preparing for our new chick shipment, to staying up late working like a mad woman trying to bring some of the chicks back from death’s door.

Last week reminded me how quickly things can change on the homestead… And how thin is the veil which separates life from death.

All the chicks survived the ride in the mail, which was a pleasant surprise. Everyone looked perky and healthy when I put them all in the brooder. (We got 30 meat birds and 15 Silver Laced Wyandotte layers.)

We checked on them several times that afternoon and all was well, so we headed inside to eat supper and start our evening routine. I headed back outside to check them again a little while later, and found five of the layer chicks trampled and completely dead, and five more almost dead. (We realized, too late, the smaller, weaker layer chicks were no match for the more boisterous meat chicks, which is why they were easily trampled. We won’t combine the two varieties in the brooder at the beginning ever again…)

I wanted to just sit and cry right then and there, but I pulled myself together, scooped up the five chicks that were still barely clinging to life, and ran them into the house. 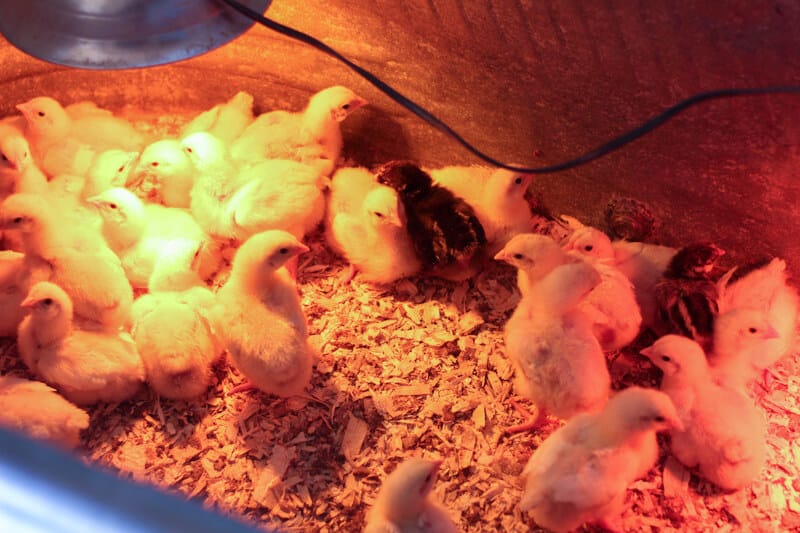 They were pretty non-responsive, wet, and lying flat… I was almost positive they were goners, but I couldn’t stand the thought of not trying something at least… So I popped towels into the dryer and started working to warm them up right away.

I’ve never really given electrolytes to my chicks before, but after watching sugar-water bring a very sick kitten back to life several months ago, I figured it was definitely worth a try with these chicks.

Sure enough, my hastily-throw together DIY chick electrolyte solution, combined with warm towels, brought all five of them back from the almost-dead– even the one who almost completely non-responsive when I first found her. I was amazed how quickly it worked after I started dripping it on their tiny beaks with a medicine dropper. I truly thought it was too late for all of them. However, within an hour of the homemade electrolytes and warm towels, they were all up walking around again. I was completely amazed.

Ever since mentioning the homemade chicken electrolytes on Facebook, I’ve had a number of you ask for the homemade electrolyte recipe I used. While I wouldn’t necessarily give this to healthy chicks, I will forever-and-always keep the recipe handy for future chick emergencies. 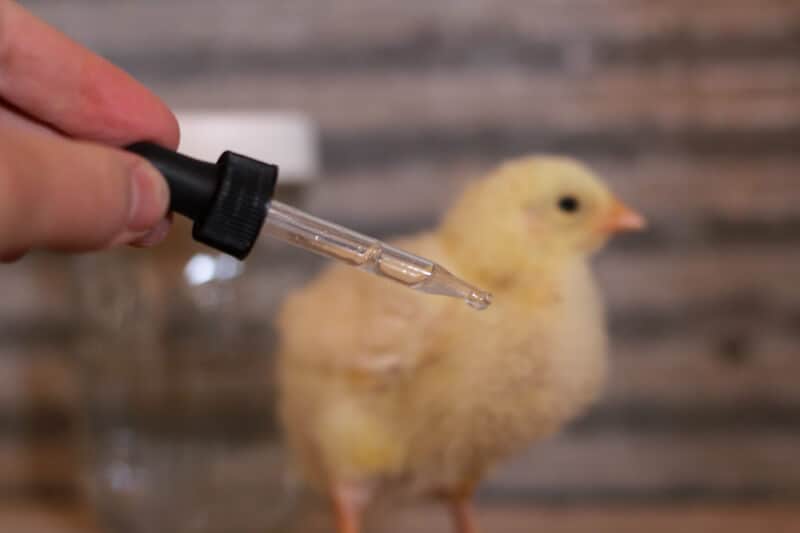 *This is an optional ingredient, and I didn’t personally use it because I didn’t have any. The easiest way to buy potassium chloride is by purchasing a salt substitute at the grocery store.

Mix all the ingredients together and stir until completely combined.

Administer to sick, stressed, or ailing chicks with a medicine dropper. If they aren’t opening their beaks, you can drip it on the outside of their beaks and sometimes they will open then.

As far as exact amounts go, I have no idea. I gave my sick chicks a few drops every 10 minutes or so until they started really perking up. Just play it by ear.

If I had a larger chicken who was dehydrated or overheated, I would offer this solution as their drinking water for a short period of time. However, I have no plans to give this to my healthy chickens, as it’s just not needed unless there is an issue. 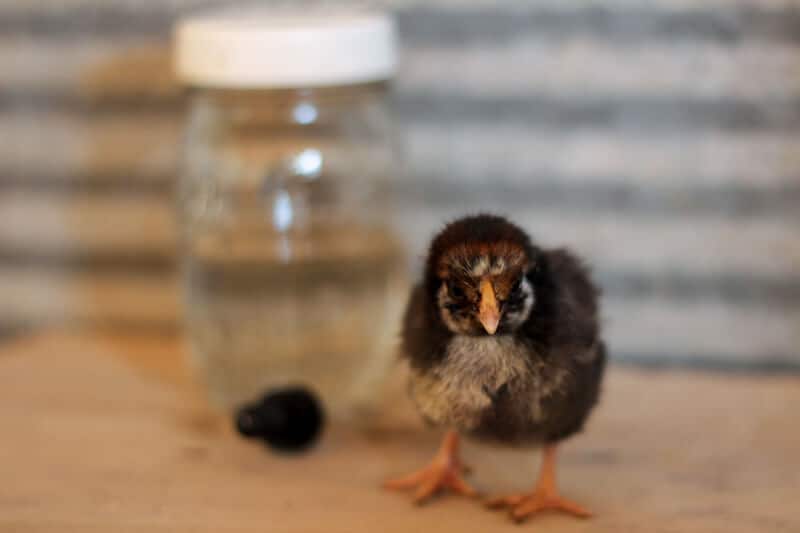 The Rest of the Story….

As much as I’d like to say this story had a happy ending, it didn’t. All five ailing chicks perked up, made it through the night and the next day with flying colors. However on the third day, four of them died with little warning. I still have no idea why– I don’t know if it was residual stress, or possibly leftover internal injuries from their trauma. Chicks are so fragile sometimes… It was a learning experience, but definitely a disappointing one. You win some and you lose some in this homesteading gig… 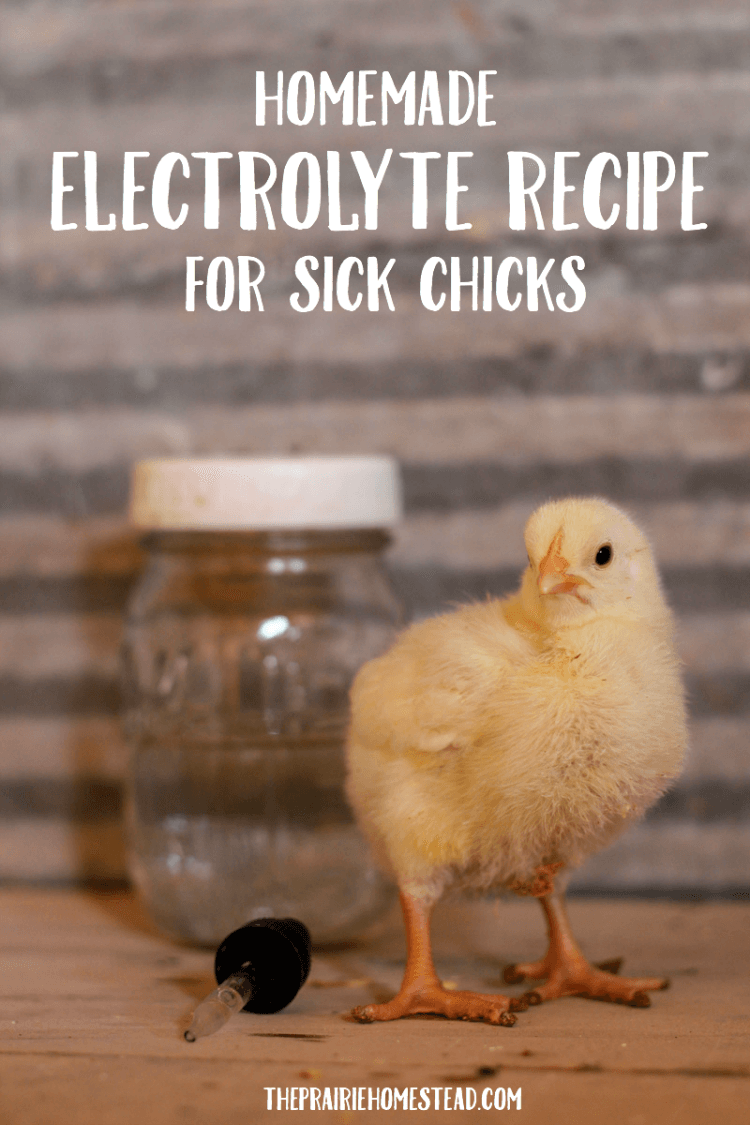 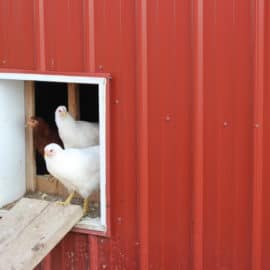 6 Strategies for Fly Control in the Chicken Coop 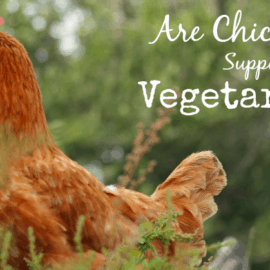 Are Chickens Supposed to be Vegetarians? 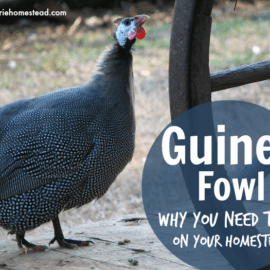 All About Guinea Fowl {And why you need them on your homestead!} 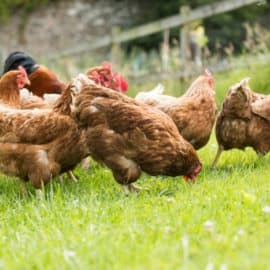 8 Ways to Use Chickens in the Garden