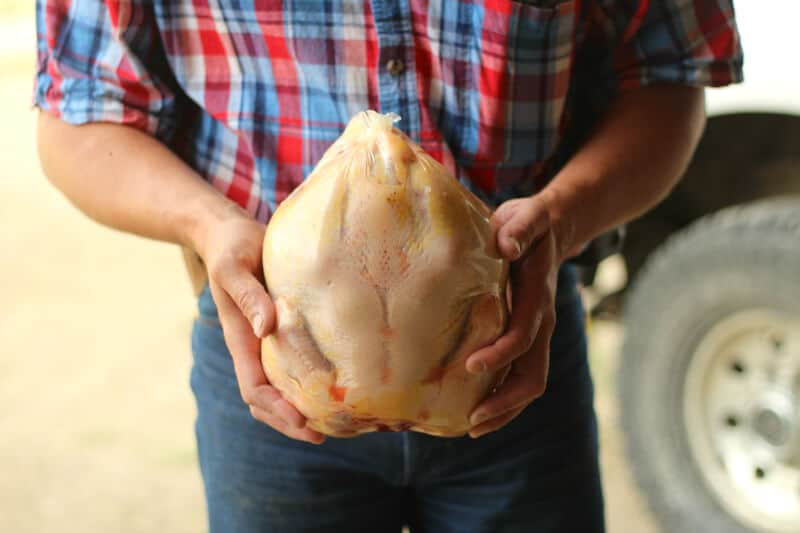 **WARNING: Because this post is about butchering chickens, it contains graphic photos.  If you don’t eat meat, I respect that decision, and you won’t hurt my feelings if you click over here to read about these super-awesome fruit & herb slushies instead. However, my family and I have made the conscious choice to raise and eat meat, and I ask you to respect our choices as well. Comments left with the intention of starting a fight will be promptly deleted.

We’ve been homesteading for 6+ years, and this is the first time we’ve butchered chickens…

That’s almost too embarrassing to announce to the world, but I had a good reason.

You see, even though we’ve raised laying hens for a long time, Prairie Husband has had a severe allergy to all poultry meat since childhood. Therefore, we had no need to raise meat chickens, since he couldn’t eat chicken (and I never felt like cooking two separate meals). So beef and pork it was. For a loooong time.

Last year, upon the advice of some good friends, he visited an NAET practitioner, and the acupuncture technique actually cleared him of his chicken allergy. (I know, I wouldn’t have believed it either, if I hadn’t witnessed it with my own two eyes… It’s insane.) But that’s a topic for another post. 😉

So there we were–fairly-seasoned homesteaders, yet complete newbies to the meat bird world.

What did we do, you ask?

Well, we created a 5-year plan of learning about meat birds, then taking some courses in meat bird farming, and then a couple of home-butchering courses, with the culmination being our first batch of birds here on the homestead, sometime in the next 5-10 years.

Wait a second. You didn’t actually believe that, did you? Surely you know me better than that. 😉

Nah, rather we ran down to the feed store, grabbed some assorted meat chicks, and decided to figure this baby out– trial and error style.

Now that butchering day is over, I figured it was time to share some of our adventure with y’all. No, I don’t even remotely claim to be an expert, but I figured you might like to see some of our process, and some of the things we want to improve on for next time.

Update: We’ve been butchering chickens for a few years now and we have an efficient system in place. If you would like to see what our setup looks like, check it out in our video (warning: this is a video about butchering chickens so there are images of animals getting processed for the freezer): 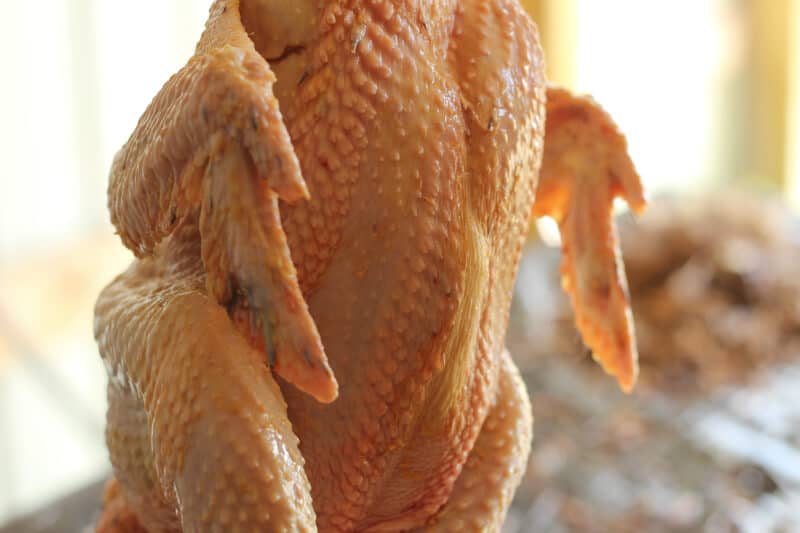 But before I dive into the specifics, I want to address a part of butchering that inevitably comes up every time I mention harvesting animals on the blog:

Is It Easy to Kill Something You’ve Raised?

Is it easy to kill something you’ve raised? No, it’s not. And I don’t relish in taking a life. However, we have chosen to eat meat (for many reasons), and if we’re going to eat it, I believe I should be willing to participate in the process of producing it. In fact, I think anyone who eats meat needs to take part of the process at least once. Far too many folks never give their meat a thought, thinking the neatly wrapped styrofoam packages at the store somehow magically erase the fact the meat inside the cellophane came from a living, breathing creature. I’ve explored this whole concept of ethical meat-eating and production over here, if you are still working through the concept. 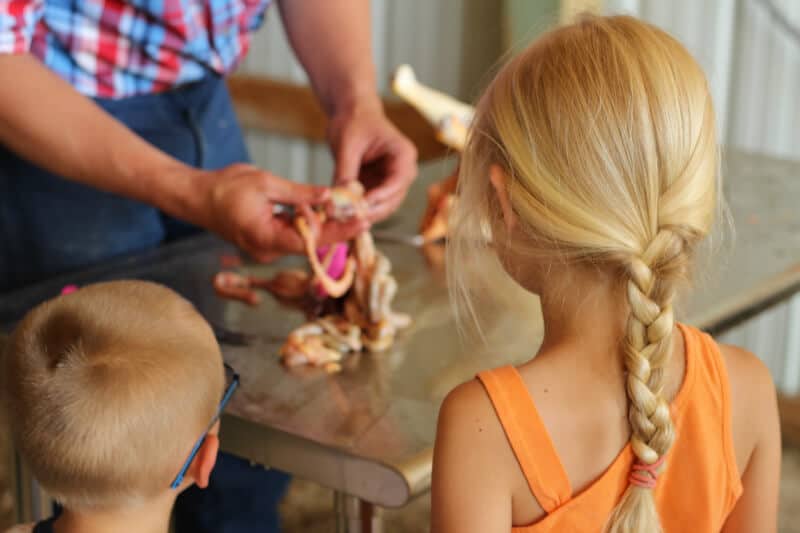 And as far as the Prairie Kids go, we don’t hide death from them. They understand that any meat we eat used to be alive, and they are full-aware the pork chops on the table came from the pigs and the burger came from the red steer, etc. We don’t act like butchering is gross or scary, so they don’t either. They were present on the day we butchered these chickens, and they watched for a while and asked questions (Prairie Girl was especially interested in the anatomy part–it was a great homeschool science lesson). And when we roasted the first bird from our harvest, they were both extremely excited to know it was one of “our” chickens. 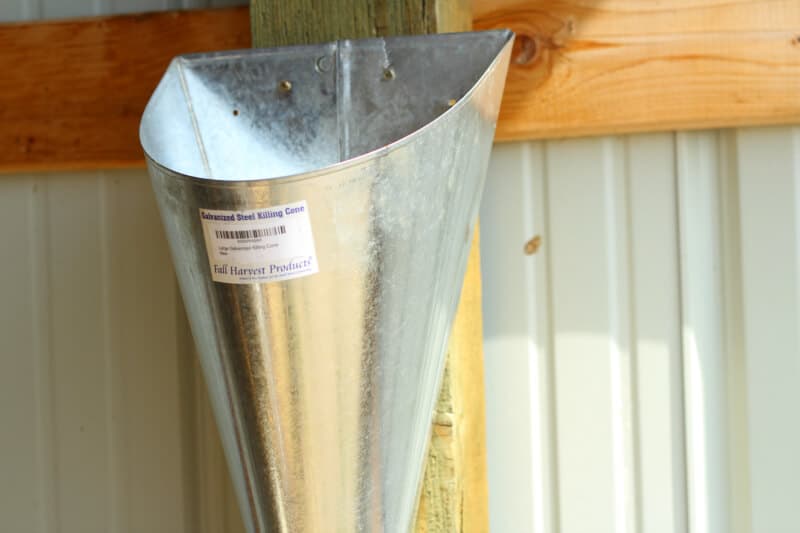 Christian was quite adamant that if we were going to have a meat bird operation, we were going to do it right. So we made the choice to invest in some high-quality equipment that will last us through many, many butchering days:

Obviously, you don’t necessarily *need* all of this to butcher a chicken, and technically, one could get the job done with an ax and that’s it. However, we want it to be as humane (and efficient) as possible, so the investment in the proper processing equipment was worth it for us.

How to Butcher A Chicken 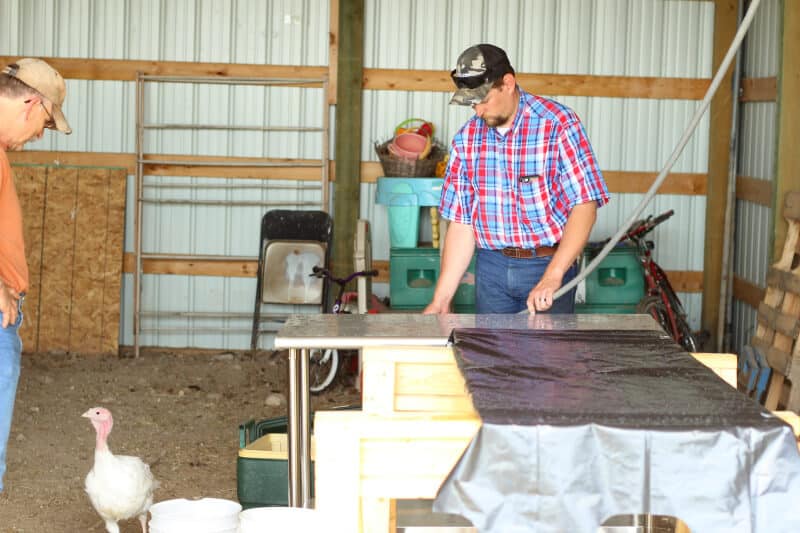 The night before, withhold feed from the birds to ensure they have an empty crop before you start.

On butchering day, take the time to get your set-up how you want it–this will save you some serious hassle later. We made an assembly line of sorts (killing cone > scald > plucking table > evisceration table > cooler with ice), and even though we just did a small batch this time around, it made things flow much smoother.

If you are scalding, (which I do recommend), begin heating the water now. You’ll want it 150-160 degrees– which hot enough to help the feathers release easily, but without cooking the bird. 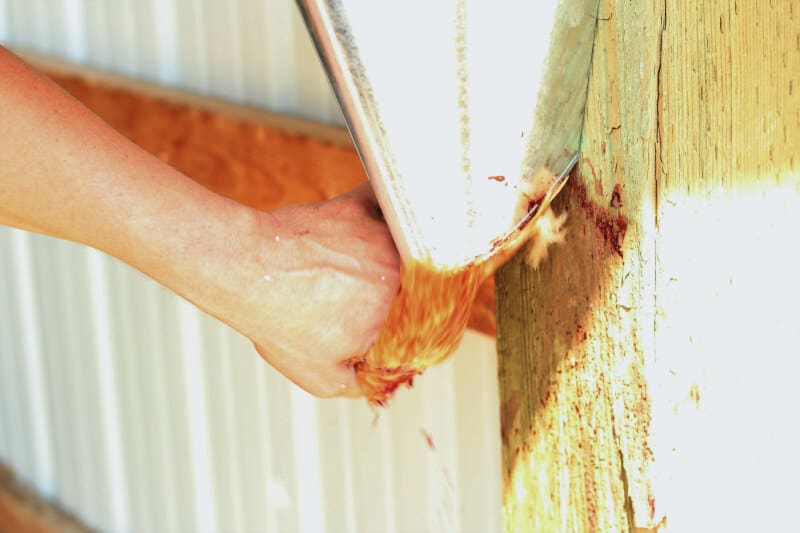 Once your set-up is complete, catch a chicken and place it in the cone, with a bucket underneath to catch the blood. We had the the bird’s belly facing the wall  (inside the cone). Grasp the head, and use a (sharp!) knife to make a quick cut to the side of the bird’s jaw (jugular).

Hold the head to allow the blood to drain completely into the bucket. Wait until the bird stops moving. 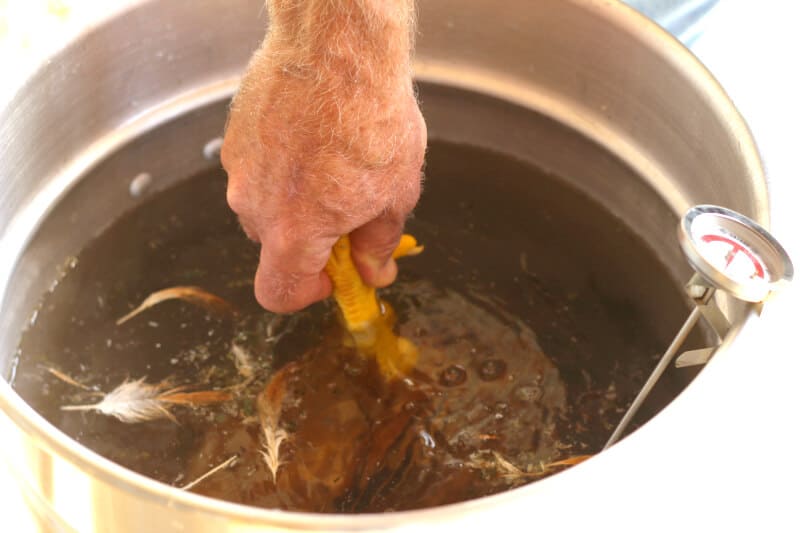 Once the blood has drained (this will take a minute or two), immediately dunk the bird into the scalding water–you can use a hook to swish it around, or just hold it by its feet. Depending on the temp of your water, it will likely take 3-4 minutes for the bird to be ready. You’ll know it’s ready when you can pinch the skin of the shank of the foot and it comes off easily. Or, you can grab a few feathers– if they come out with minimal effort, it means you’re ready to pluck. (I can’t imagine trying to pluck without first scalding the bird– it makes it infinitely easier.) 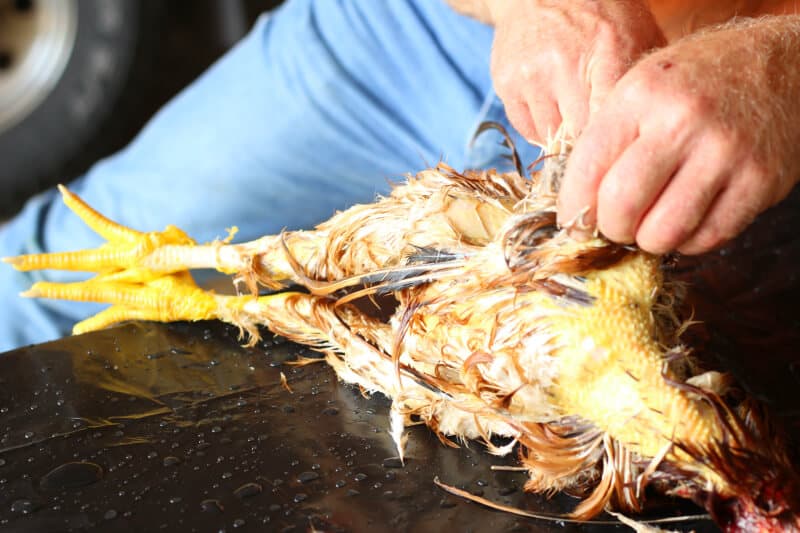 Removed the scalded bird and place it on the plucking table. If you don’t have a mechanical chicken plucker (we didn’t at first), the process is simple: grab feathers and pull them out. It’s just as glamorous as it sounds. We found wearing rubber gloves and swiping up and down the skin once most of the bigger feathers were gone helped to grab some of the smaller, more stubborn feathers. 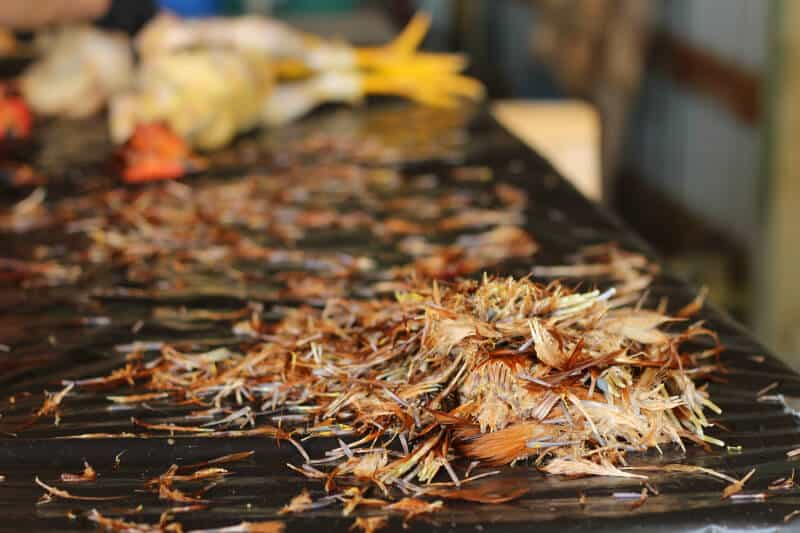 Cut the head off (we used the shears for this), and then cut off the legs. If you cut at the “valley” of the joint, you can avoid the bones and get a clean cut. (Hitting bone with your knife will dull it.) You can also clean and save the feet for chicken stock, if you wish.

There is an oil gland on the back end of the bird that will taint the taste of your meat if it ruptures, so you’ll want to remove it. Slice down behind it, and then “scoop” out with your knife to remove it, like this—> 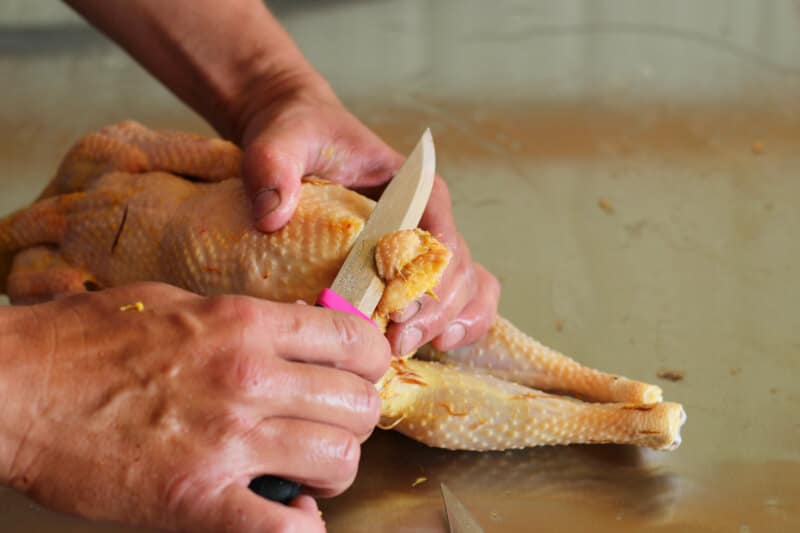 Make a slice in the skin with your knife above the breastbone at the base of the neck. 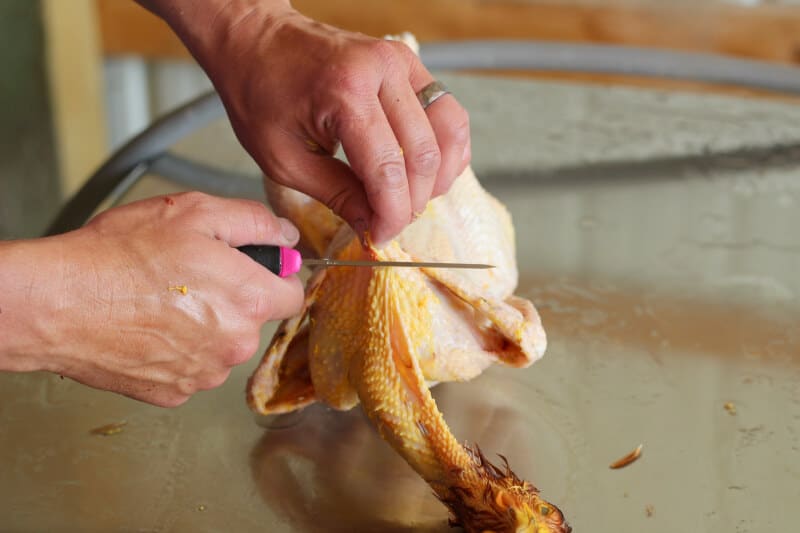 Tear down with your thumb to find the crop, windpipe and esophagus. If you forgot to withhold feed from the birds, you’ll find a full crop. Be careful not to rupture it. (If you accidentally do, just rinse off the partially digested feed before continuing.) Bring the esophagus and windpipe out of the neck cavity, and break the connective tissue around the crop. However, do not pull this assembly out completely– leave it attached. 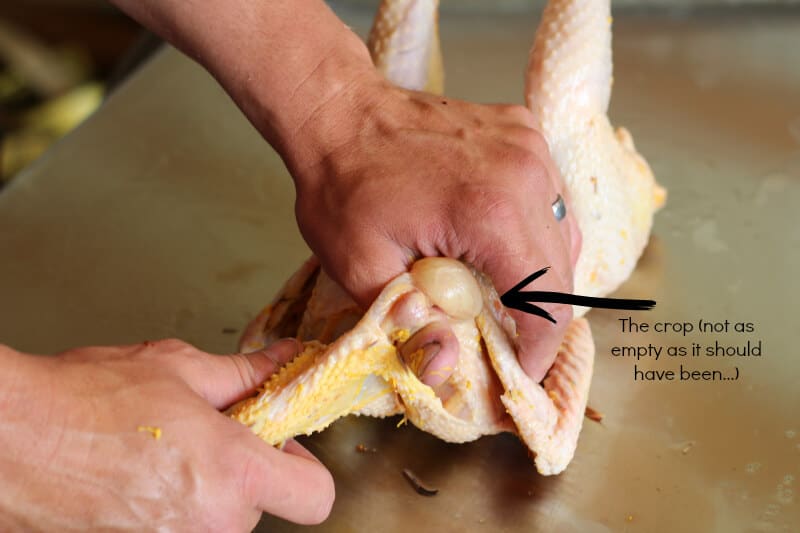 With the bird still laying on its back, flip it 180 degrees so you can work on the back end. Cut right above the vent, and tear open the carcass with both hands. Put your hand into the carcass, pull the fat off the gizzard, and then hook your finger down and around the esophagus. Pull this out– you should have a handful of connected internal organs now. Cut down either side of the vent and underneath to remove all the guts, in one pull. Now go back in to remove the lungs and windpipe, or anything else that didn’t quite come out the first time. 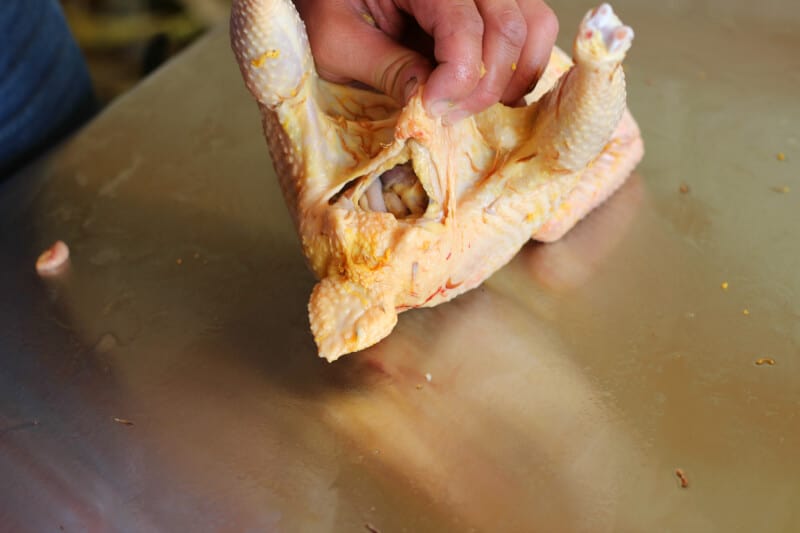 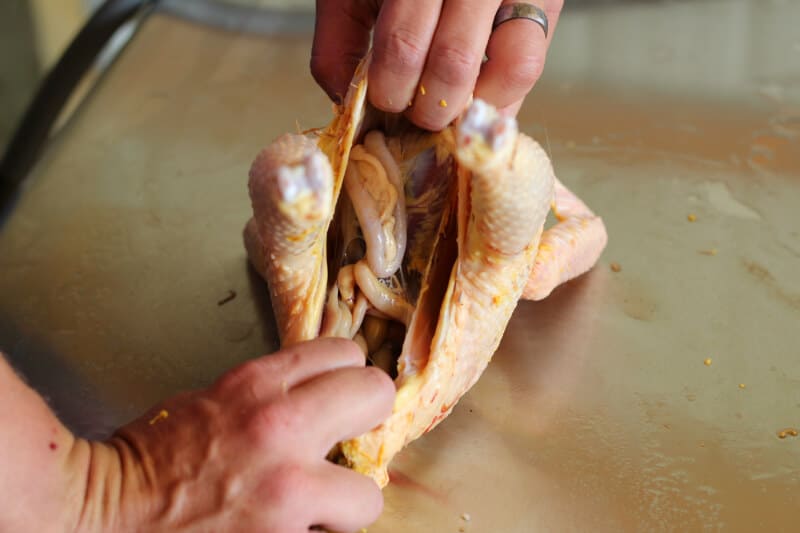 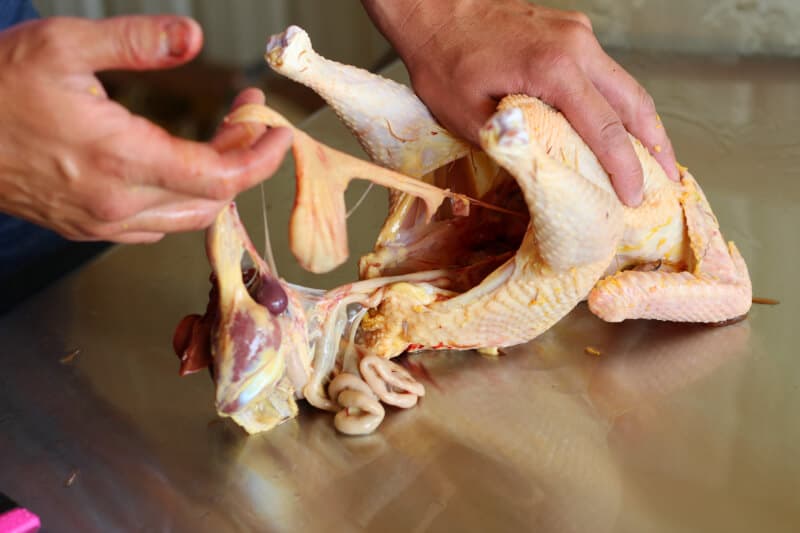 Make a slice in the excess skin that’s hanging off the back cavity, and then tuck the legs up through the hole so you have a nice little package. 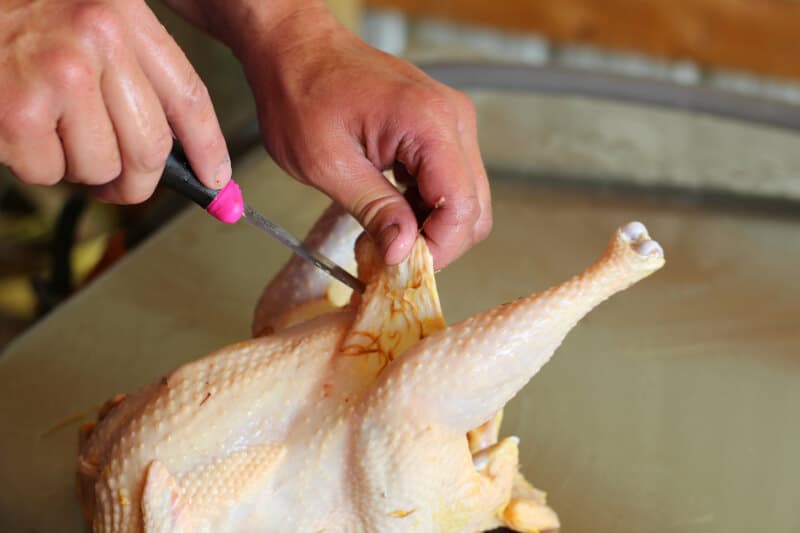 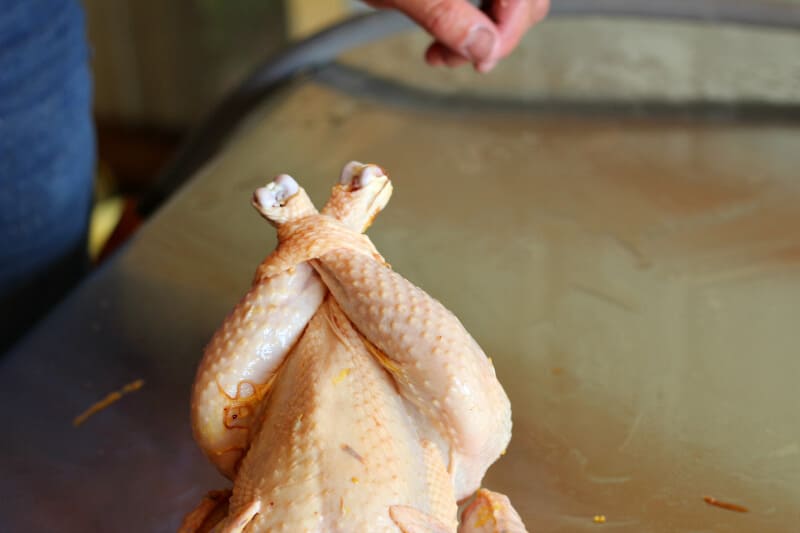 Once each bird is finish, place it in a cooler filled with ice. (Or if you have fridge space, you can chill them in there). It’s important to chill the birds as quickly as possible and to keep them cold. Some people recommend chilling for 16-24 hours before you wrap and freeze. However, we didn’t have enough ice to make this happen, so we only chilled ours for 6 hours. 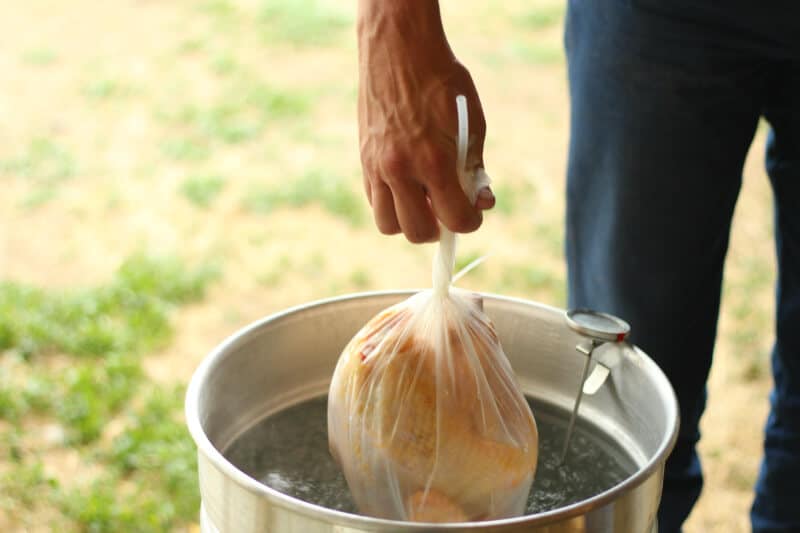 8. Bag or Wrap the Chickens for the Freezer

Now you’ll want to wrap, label, and put in the freezer. We used heat shrink bags to prevent freezer burn and they give a really nice finished product. You’ll want to follow the directions on the bags you get, but you basically place the chicken in the bag, dunk it in boiling water for a few seconds, and then tie tightly. Place in the freezer and you’re done!

What We’ll do Differently Next Time: 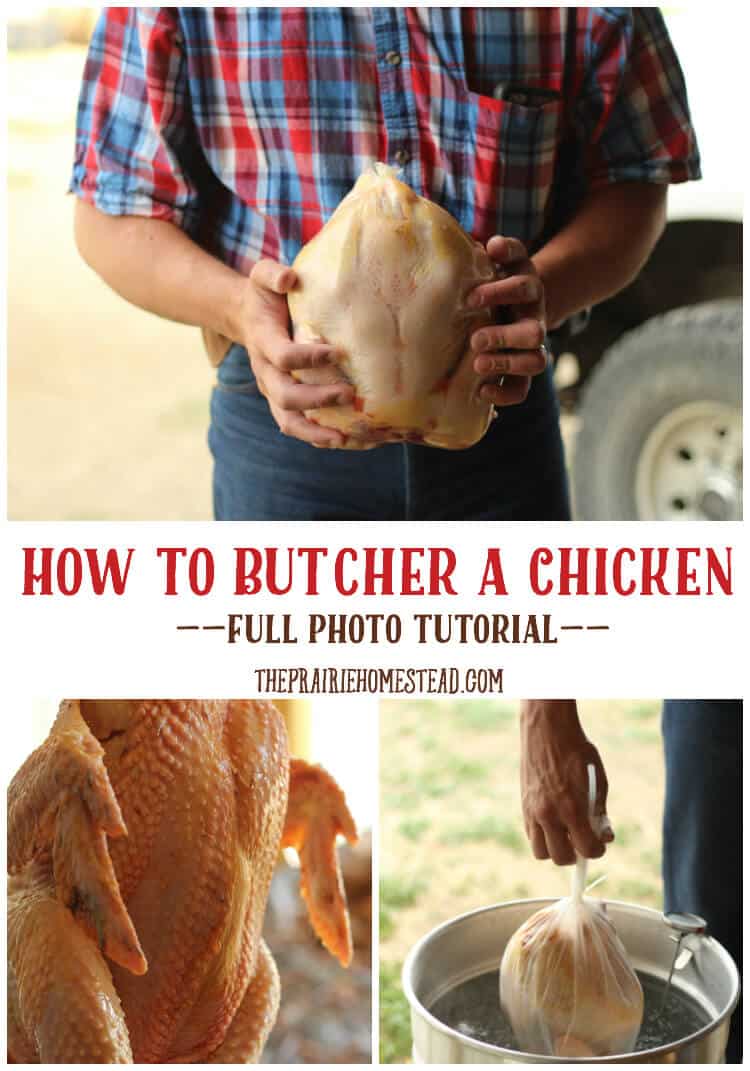 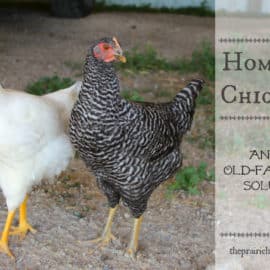 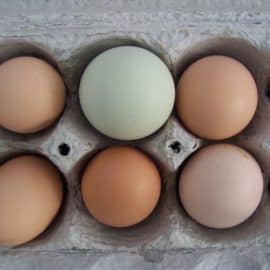 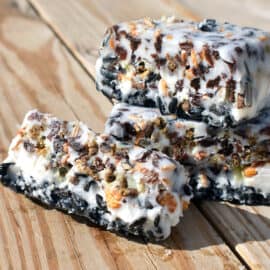 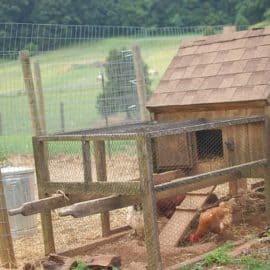 How to Build a Chicken Run