Listen to My Latest Podcast Episode:
Season 11: Episode 9: The Great Egg Conspiracy (or not) 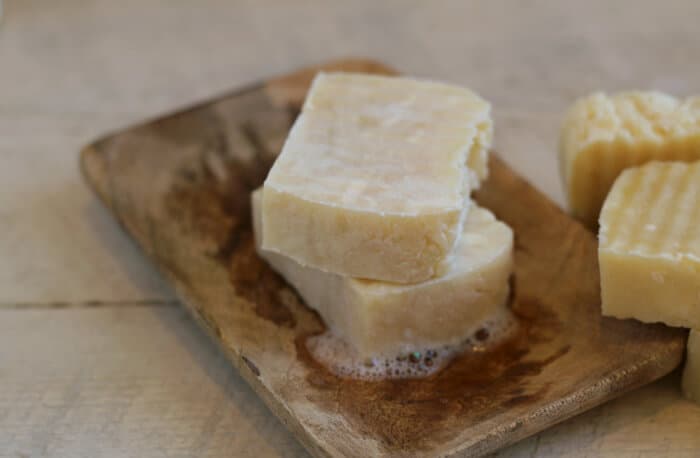 It’s amazing all the things you can do with a big blob of beef fat.

Once you render it into tallow, soap, candles, and the best french fries you’ve ever put in your mouth all become very real possibilities.

I’ve been threatening to share a tallow soap recipe for a while now, and the day has finally arrived, my friends.

Tallow has had a bad reputation for years, which is rather silly, because it’s an excellent choice for soap making. It’s mild for the skin, produces a gentle lather, and makes a very hard bar that won’t turn into goop in your shower.

But the real reason I’m drawn to it for soap making, is because lard and tallow make the most sense for homesteaders.

I’m often drawn to the “gourmet” soap recipes I see on Pinterest with their elegant swirls of color and fancy flavors. But when I click on the recipe, I usually end up skipping right over it because it calls for a bazillion different types of (expensive) oils I don’t have and really don’t feel like ordering.

Don’t get me wrong, I don’t have anything against fancy soap recipes, but for me, making soap is more about function versus a fun hobby for my spare time. (Just saying “spare time” makes me laugh. Hahahahahaha.)

Lard (rendered fat from pigs) and tallow (rendered fat from cattle) were the traditional fats for our homesteading ancestors because they were plentiful and cheap. Because we raise and butcher our own hogs and steers for meat, we also tend to have a bounty of pig fat and beef fat. It only makes sense to put it to good use, otherwise, it’d just go in the trash. What a waste.

Most tallow soap recipes you see include a bit of tallow with a handful of vegetable oils as well. Because tallow lacks a bit of cleaning power on its own, so it’s often combined with other oils. However, the purist in me insisted on creating a 100% tallow bar, just like my homesteader ancestors would have used. I’ve also included a tallow/coconut oil recipe, just in case you’re looking for the benefits of tallow in a slightly more modern bar. 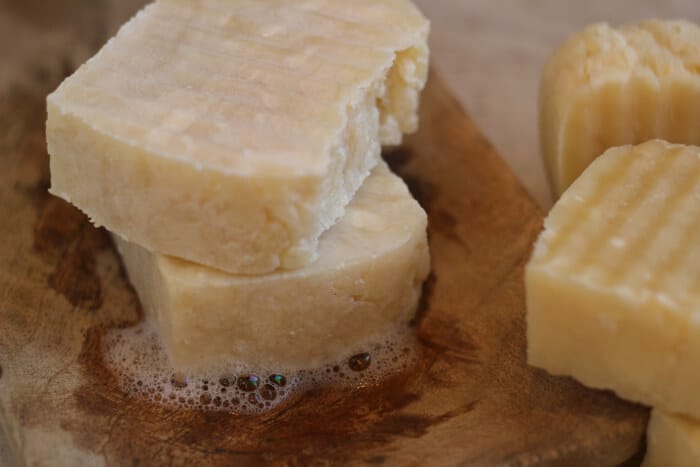 Where to Get Tallow or Lard

If you raise your own pork and beef, the easiest, most logical source of tallow or lard is the animals you butcher. If you butcher yourself, the very best fat for soap and food recipes is the leaf fat found around the kidneys. Once you remove the kidneys from the inside, follow these directions for rendering the fat to remove the impurities. This will leave you with luscious, limitless tallow or lard. You can use the fat from other parts of the animal, but it may produce an end result with a slightly more “beefy” scent/flavor.

If you get your meat from a butcher shop, ask them to save leaf fat for you. They are usually happy to give it to you or sell it for a minimal fee, as it’s not exactly a hot commodity at the moment.

Yes, you have to use lye when you make soap. Otherwise, you’d be washing yourself with a giant blob of fat, which wouldn’t work well, for obvious reasons. Lye provides the necessary chemical reaction to turn fat into soap.

This is a hot process soap recipe that uses a crockpot. If you’ve never made crockpot soap, please carefully read this post FIRST, it contains very important safety information. Lye doesn’t have to be scary, but you do need to be respectful of it. ALWAYS wear protective eye gear, gloves, and long sleeves when working lye, and handle it in a well-ventilated area.

If you want to use a different amount of tallow, or have a smaller/larger mold, that’s an easy fix. Just run your fat amounts through a soap calculator first (like this one) to make sure you are using a proper amount of lye. 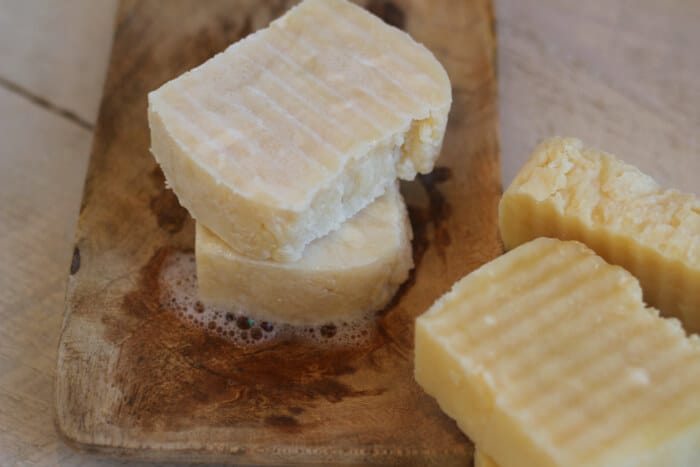 *When making soap, always measure by WEIGHT, not by volume

Melt the tallow in the crockpot (or a pot over the stove if you’re in a hurry).

Once the fat is nearly all melted, put on your safety gear and carefully measure the lye.

In an area with good ventilation (I do this under with my oven fan on), carefully stir the lye into the measured water. ALWAYS add the lye to the water– do NOT add the water to the lye, as it can result in a volcano-like reaction.

Stir this lye/water mixture until it has dissolved and let it sit for a few minutes. There will be a chemical reaction between the lye and water, and the water will become very hot, so be careful handling the container.

Place the melted tallow in the crockpot (if it’s not already there), and slowly stir the lye/water mixture in.

Trace is when the mixture turns to a pudding-like consistency and holds its shape when you drip a bit on top. Like this—>

Trace can take anywhere from 3 to 10ish minutes to achieve.

Now put the lid on the crockpot, set it on LOW, and allow it to cook for 45-60 minutes. It will bubble and froth, which is fine. Just keep an eye on it to make sure it doesn’t attempt to bubble out of the pot. If it attempts an escape, just stir it back down.

Once it has cooked for a while and passes the “zap” test (see this post to understand what the zap test is), pour/scoop it into a mold and allow it to set for 12-24 hours.

Remove the solid soap from the bar, cut into bars, and allow to cure for 1-2 weeks. You can technically use the soap right away, but the dry time will produce a nicer, harder bar of soap.

Follow the above directions for pure tallow soap, melting the coconut oil in with the tallow in the first step. 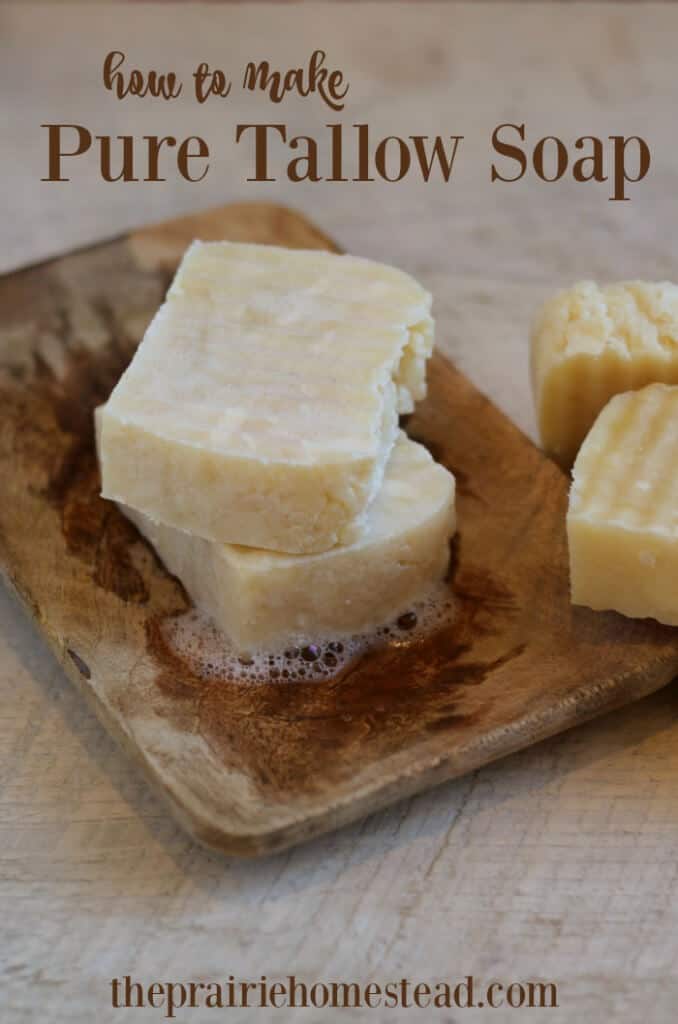 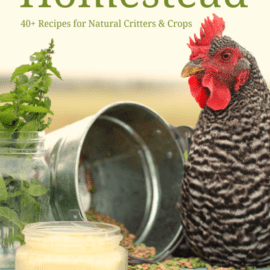 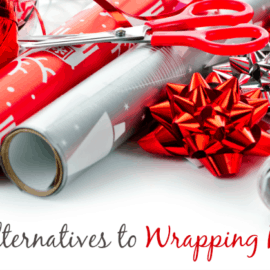 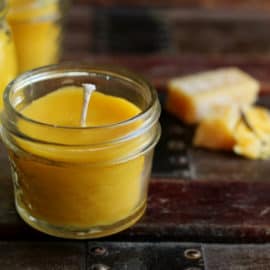 How to Make Beeswax Candles