I’m always trying to come up with better systems and ways to do things here on the homestead. Anything that can save a little time and make everyday tasks a little more streamlined is always at the top of my list!

A while back I wrote a post on improvising your own goat milking equipment. Like I stated in that post, you don’t have to shell out wads of cash to have safe, functional equipment for your home dairy.

Since starting to milk our cow, I’ve had to change a few pieces of my equipment (a bigger bucket for sure!), but many of the other things work for cow’s milk just as well as they do for goats.

However, I recently had a “duh” moment and wanted to share my findings. It’s just a little change, but every little bit counts, right?

As you saw in my initial post, I recommended using a washable coffee filter as a milk filter. However, the only kind they had at the store when I purchased mine was a round one with a plastic bottom (on the right in the photo). I used it for over a year and it worked. But it was slow to filter because of the solid bottom and I usually had to stand there and gently shake it to get the milk to filter through the build-up of the foam. 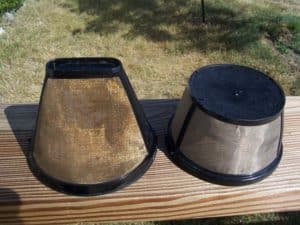 Until I discovered the cone-style reusable coffee filters (on the left).

I’ve found that this style of filter works much more efficiently, and it only costs a few dollars more. (I ordered this one off of amazon.com, but I know many stores carry them, too). Perfect!

Initially, I was putting the filter inside a canning funnel to pour the milk into my jars. Like this: 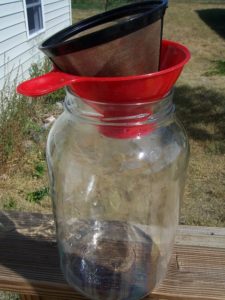 But, my sister helped me milk a little this summer and discovered that switching them around and putting the funnel inside the filter actually works even better. This way the filter doesn’t flop around in the mouth of the funnel and splash milk on your counters.

Why didn’t I think of that earlier? I have no idea. 😉

And of course, the jar issue… A milk cow obviously gives far more milk than a goat, so quart sized mason jars were no longer cutting it as far as milk storage.

Thankfully, I discovered that Azure Standard carries gallon sized glass jars for VERY reasonable prices. I’ve heard many people say to buy lots of gallon-size jars of pickles as a way to collect inexpensive jars for milk, but after pricing them out, I think Azure is even cheaper than that! Plus, you don’t have to make yourself sick on pickles…

So, just a few little tips to make your home dairying adventures a little easier. I’m hoping to have the “duh” moments at my house, so you don’t have to! 🙂

Interested in other home dairy posts? Check these out: 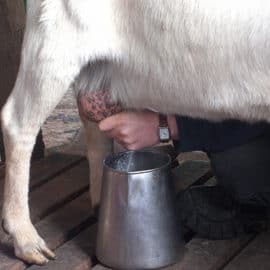 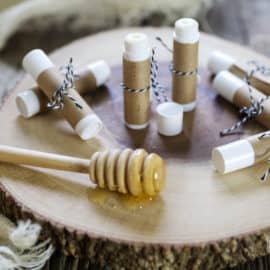 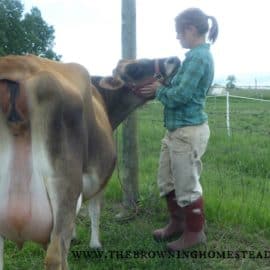 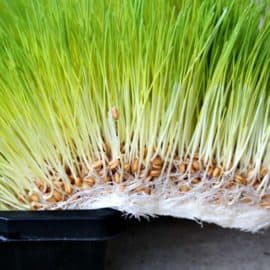