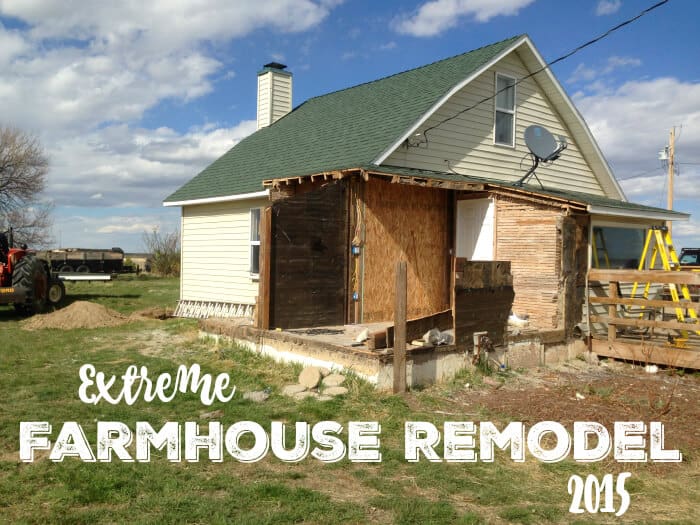 Even bloggers. Yes, I know, it’s hard to believe, huh?

Several years ago, I wrote a post all about how much I loved living in a small house.

And it was true– I loved our little farmhouse with all its quirks. We had one toddler and a small baby and it fit us just perfectly. 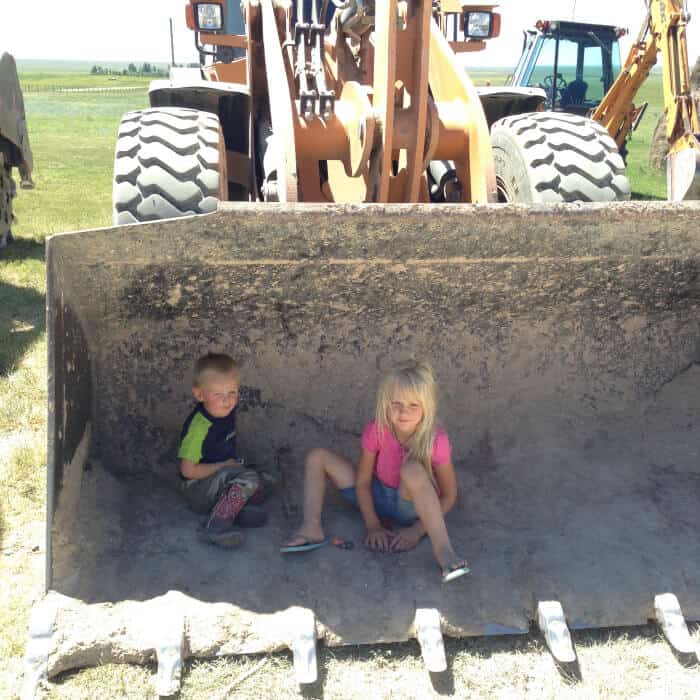 The toddler got bigger, the baby got bigger, I got pregnant with baby #3, our dogs got bigger, and we added a lot of new aspects to our life, including two home-based businesses and homeschooling.

And BOOM. All of a sudden, my quirky little farmhouse just plain stopped working. We were crammed into this house, no matter how much I purged, decluttered, and reorganized. It didn’t help the awkward layout made the space we did have (around 900 square feet) even less usable.

Something had to give. We either:

a) Had to move

b) Had to do some serious renovation on this quirky little farmhouse.

We decided upon the latter. The thought of moving after all the blood, sweat, and tears we’ve poured into our homestead, quite frankly, made me want to cry.

So bring on the remodeling…

My husband has an extensive background in construction (he’s also a Master Electrician) so after we did some checking around realized how much a general contractor would cost, we made the decision to act as our own general contractor. I would NOT recommend the Average Joe do this, as there is much value in working with an expert and General Contractors can be extremely valuable. But this route made sense for us with my husband’s prior knowledge and experience. (And the fact that our essential oil business has made it possible for him to work from home with me now.) 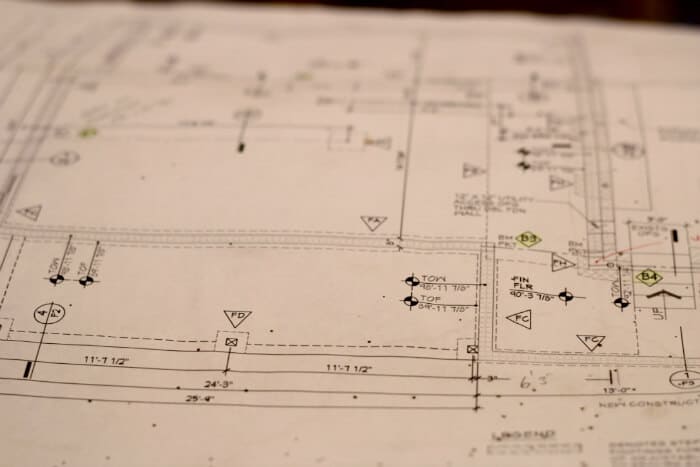 We paid a professional to help us figure out a design and draw up the blueprints (worth every penny), and after months of dreaming and planning, started ripping our farmhouse apart in April. Like literally, ripping it apart… 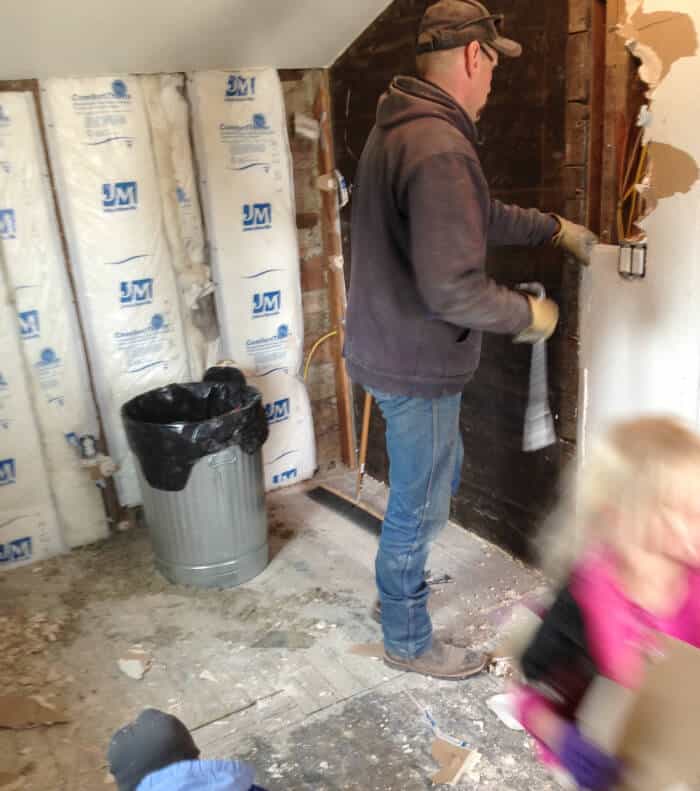 My washing machine was sent to live out in the shop (where it still is, at the moment…), as we demoed the laundry room, dining room, and part of the ancient basement. Twas great fun. And my already-crammed house got a whole lot smaller overnight. 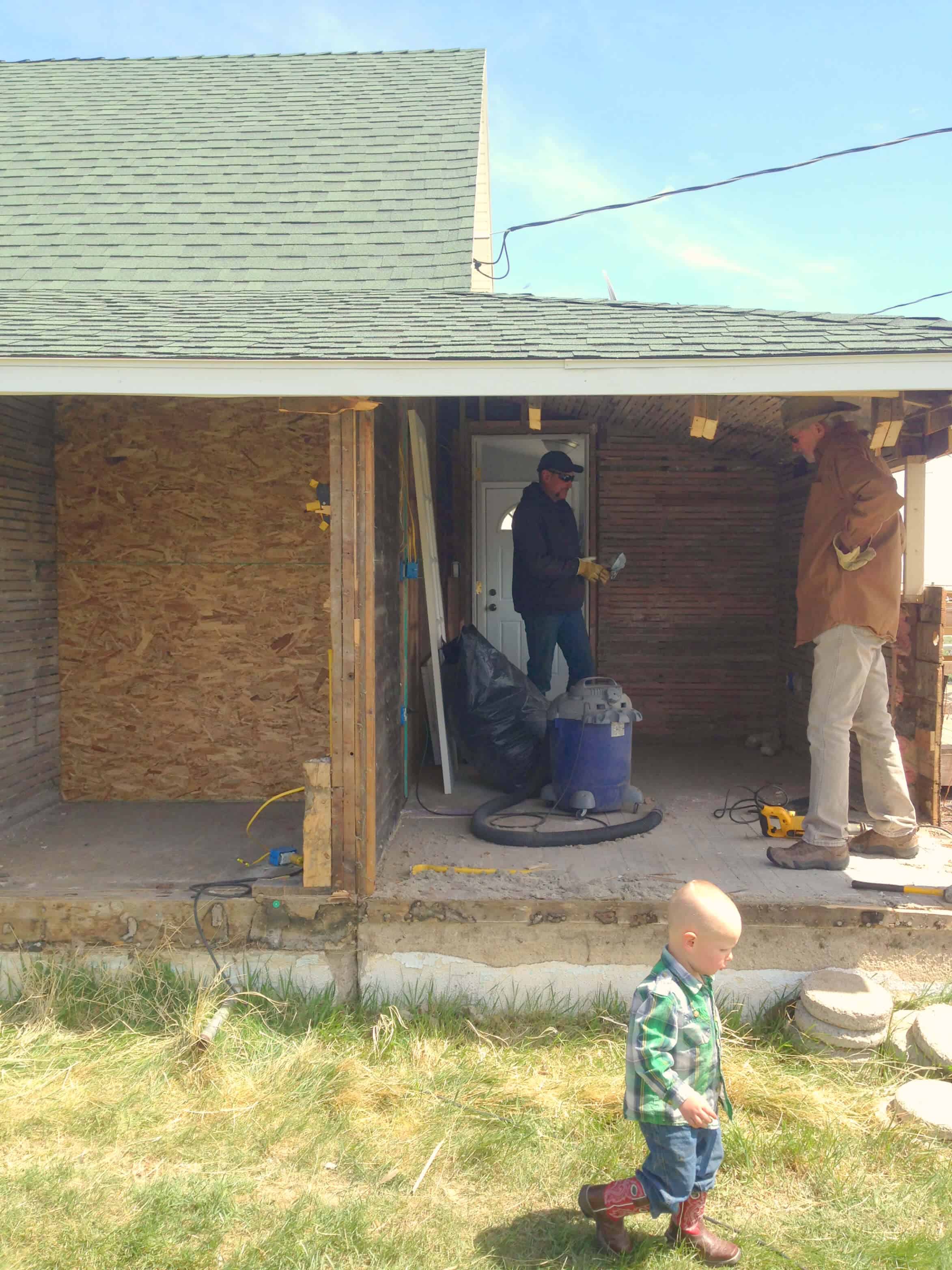 We paid someone to dig the hole (also worth every penny), and excitedly waited for the concrete crew to arrive. 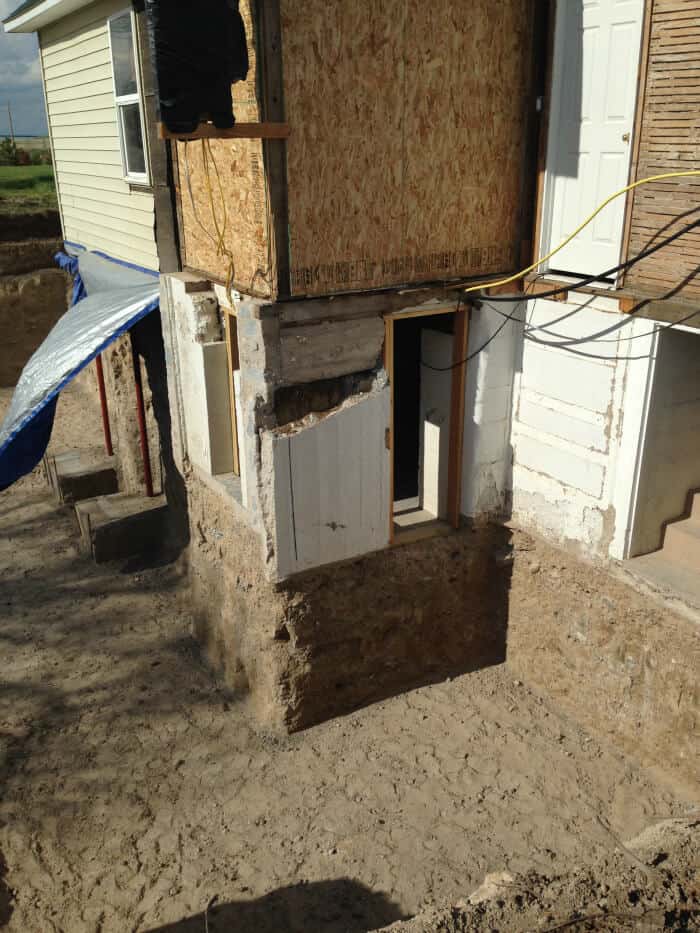 We worked with an engineer to make sure the house was supported sufficiently and wouldn’t topple into the hole during this period. A-hem.

The concrete crew was pushed off about two months. I would like to say I had a wonderfully patient attitude during that time, but I didn’t. It just about drove me insane to look out at the empty hole every day with no progress. My construction-savvy husband assured me that was just how construction goes.

But I still grumbled. 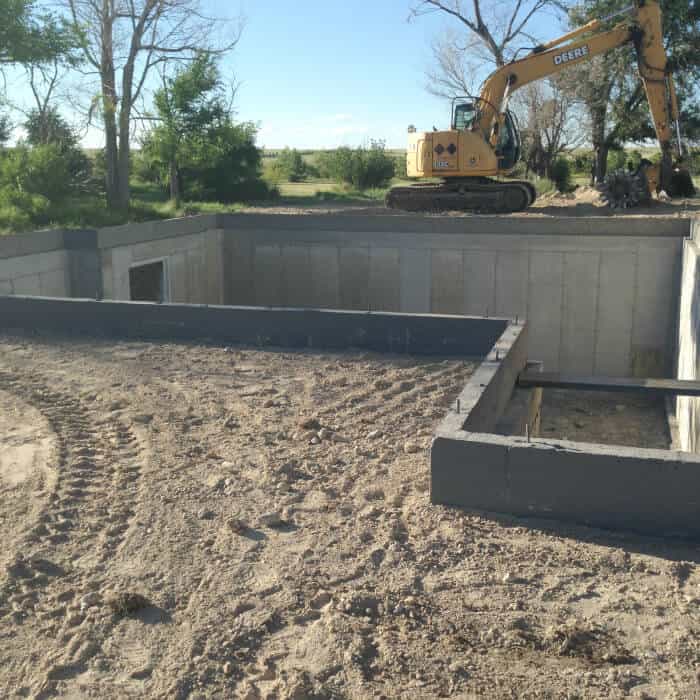 When the concrete finally arrived, I wanted to throw a party. And I probably would have, if I hadn’t been huge and pregnant. And if I would have had a dining room. And a table. (Hey, there’s no better time to be uncomfortably pregnant and have a new baby than in the midst of a major remodel project, right?)

So then we jumped into framing. Prairie Husband did all of this himself, with a little (OK, a LOT) of help from some great friends and neighbors. 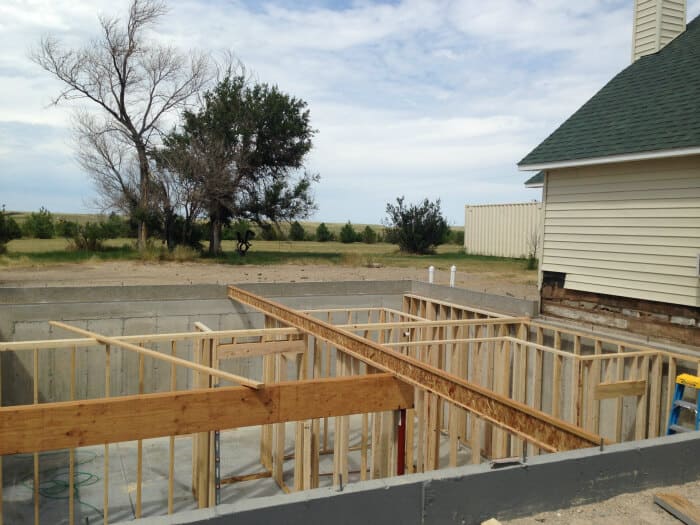 Can I just say it’s a pretty awesome feeling to watch the plans you’ve poured over and dreamed about for months finally taking shape? 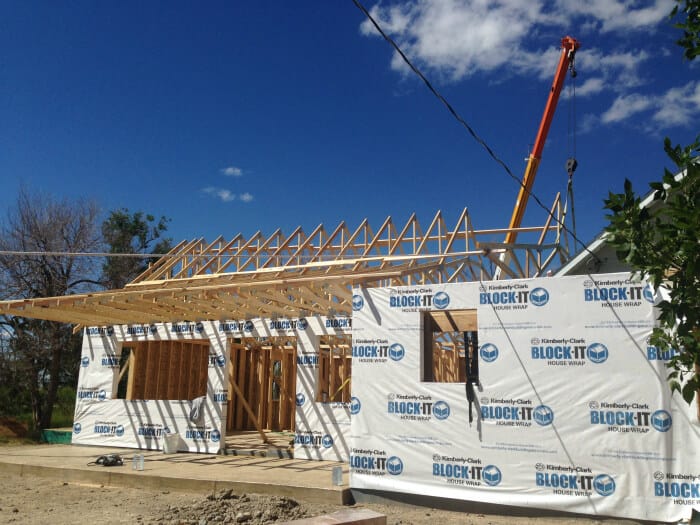 Mr. Turkey and the chickens also loved the new, open house, much to my husband’s dismay. For some reason, he gets all grumpy when there’s chicken poop on his tools. He’s so picky.

After that, we started busting our tails to get everything as weather-proof as possible before the snow flew. That might sound crazy, considering it was August at that point, but it’s not uncommon to have snow here as early as September, so the race was on. But that’s just how construction goes around here.

After ripping off the flimsy, plastic (and annoyingly yellow) siding off the old house, we discovered many of the boards under the tar paper were ancient and disintegrating. So we had to take a small detour and put up zip panels for reinforcement and insulation before we could start siding. Gotta love those construction detours when you’re already on a tight schedule…

We settled on a combination of cedar siding and corrugated panels made of weathering steel for the outside. We love the look of cedar (we are using a combination of lap siding and board and batten design), and the metal wainscoting not only provides extra protection (from dogs, weather, and my sloppy weed-eating skills…), but also will naturally rust and looks darn cool. It was a huge improvement over the flimsy plastic siding we had prior. I don’t miss that stuff at all. 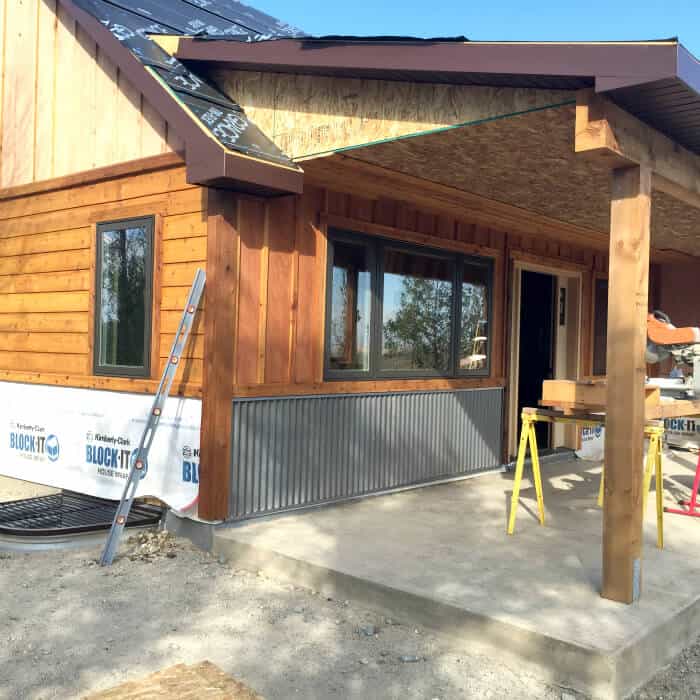 For the roof, we went metal, due to the angles we had to work with and our frequent high winds.

Thankfully, the Prairie Husband was able to do all the roofing and siding, which was a very good thing. The siding and roofing ended up having a TON of cuts and tedious detail work, which would have made it prohibitively expensive if we had hired someone else to do it. He’s pretty handy like that. 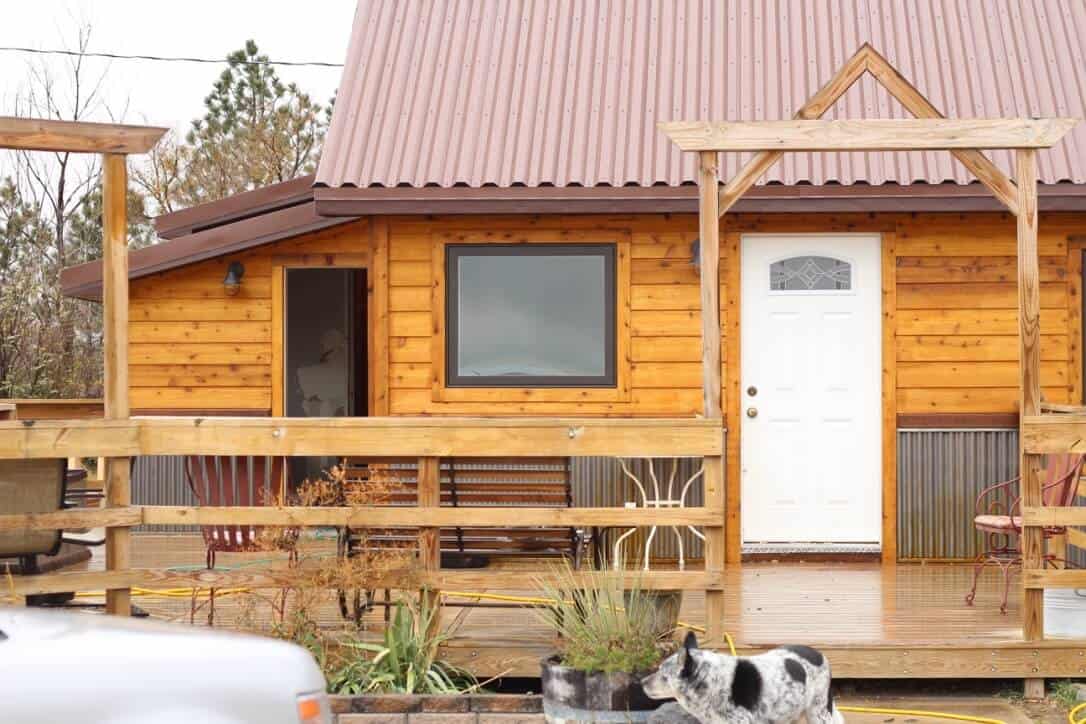 I can’t stop staring at it. SO much better. (Still gotta paint that door brown though…) 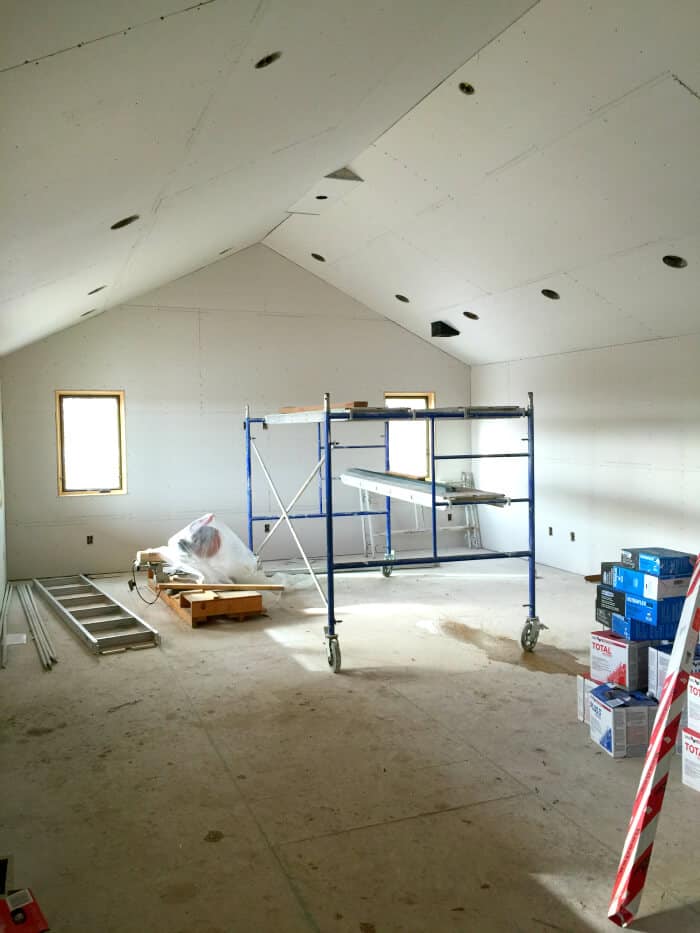 We’ve officially passed the “big” inspection for framing, electrical, and plumbing, and now we’re currently waiting on the sheetrock to get done. (We hired that out– also worth every penny.) 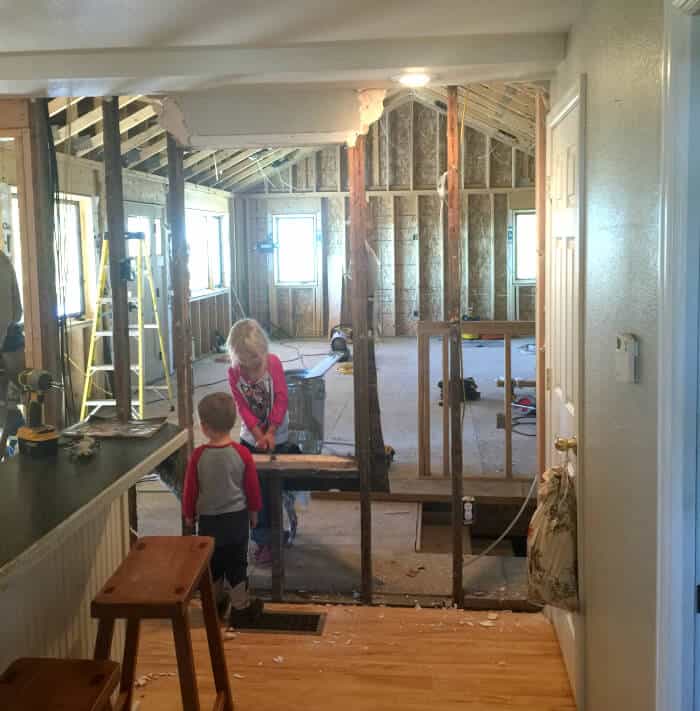 As the project progressed, it quickly became apparent our current kitchen layout wouldn’t flow well with the new addition. So yeah… we’re currently gutting the kitchen and re-doing things there, too. The old ceiling was sagging and needed to be reinforced anyway. It’s kind of like that joke where the couple buys a new couch, which ends up being a new chair, then new curtains, then new carpet… But I hear that’s just how construction goes… 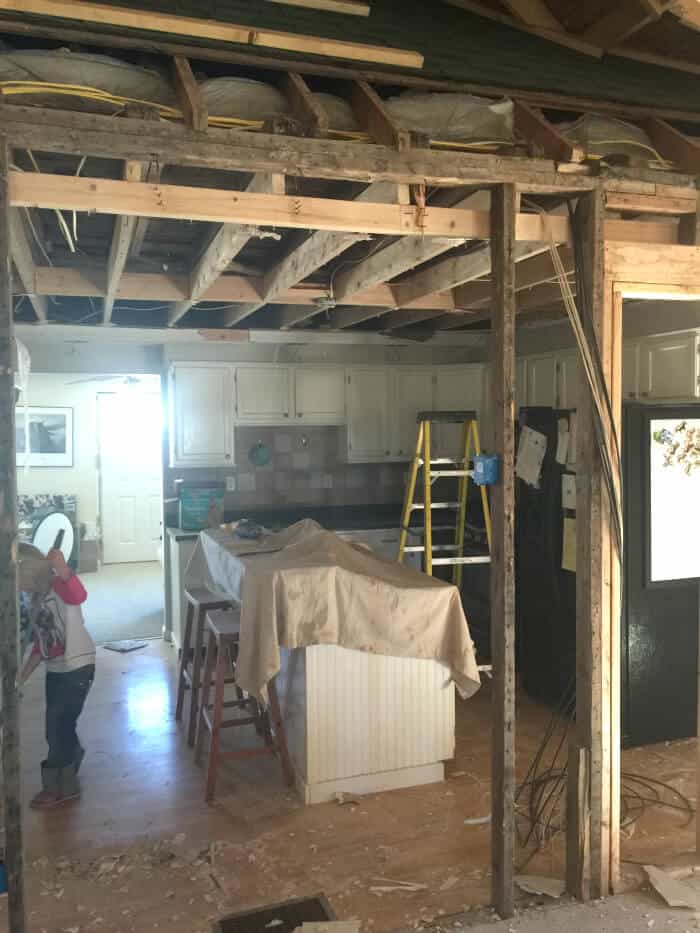 So yeah, I currently have only one set of working lights in the kitchen, a exposed ceiling, and plywood walls. And I have to wash the dust out of all the pots and pans before I use them. It’s almost like camping. Except you never get to go home to civilization. And there are no s’mores.

But all in all, even amidst the massive chaos, dust, and craziness, the process has been fun, we haven’t killed each other yet, and I’m exceedingly thankful we are able to expand our living space like this. And I’ll be even more thankful once it’s all done and I’m no longer living in half of a house. We won’t be in by Christmas, like we originally hoped, but that’s just how construction goes. Or so I’m told.

And yes, I’ll definitely be posting ‘after’ pics… Once we get there… If that ever happens… Just kidding… Sorta.

UPDATE: We finished! Here’s the post with all the after pics—> 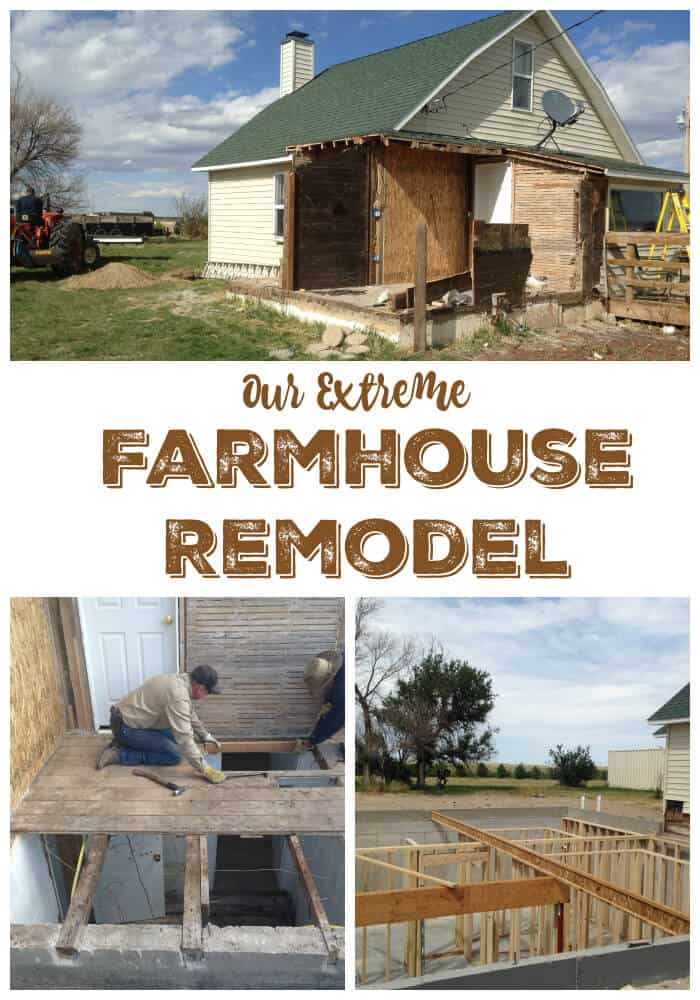 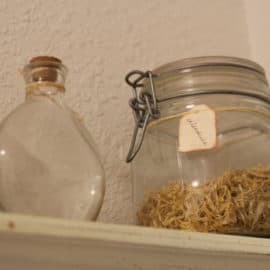 How to Decorate with Repurposed Items for Farmhouse Flair 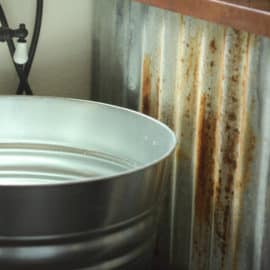 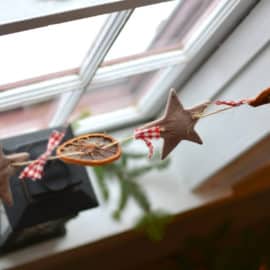 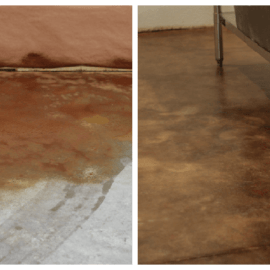 How to Acid Stain Concrete Floors