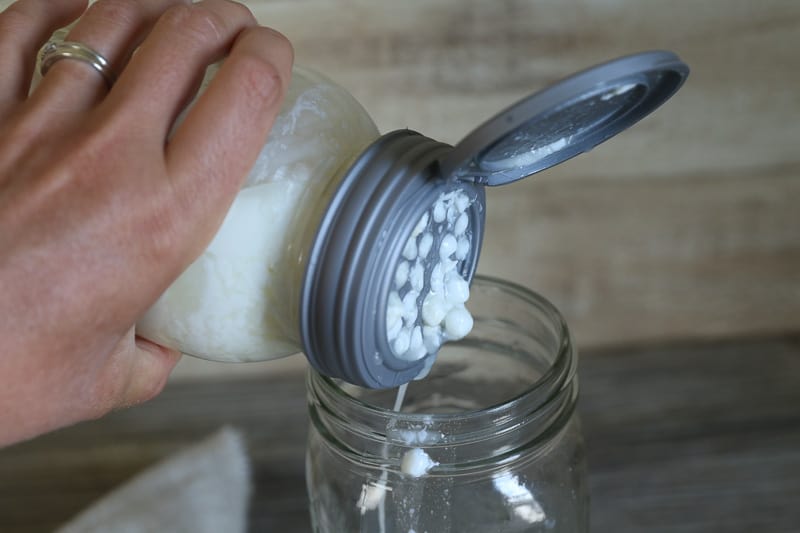 I never thought I’d have to set up “territories” on my kitchen counters.

The crock of continuous brew kombucha occupies the east end of the kitchen island, the sourdough starter lives in between the sink and stove, and the occasional fermented veggies (like sauerkraut) reside near the overflowing egg bowl.

And now, there’s a new member joining the club:

I’ve been aware of kefir for a long time, but always figured I had enough cultured dairy in my life (aka the yogurt, the buttermilk, the sour cream, the fromage blanc… catch my drift?), until I realized kefir might just be the very answer to a problem I’ve had for years. But more on that in a minute…

Kefir is an ancient, cultured probiotic beverage, kinda like a drinkable yogurt.

(I pronounce it KEE-FER, but I think the “proper” way to say it is “Ki-FEER.)

When I first heard about kefir, I couldn’t figure out why I would make drinkable yogurt instead of eating yogurt with a spoon. However, I’ve since learned that kefir is loaded with probiotics (even MORE than yogurt and it’s a pretty darn cool cultured dairy product.

Where did Kefir come from?

No one really knows how kefir grains began or where they came from, other than we know it originated somewhere in the mountains of Asia.

For some reason, this aspect of kefir completely amuses me, as we’re all guzzling this fermented milk of unknown origin.

Hey, it seems to be working out well, dontcha think?

Anyway, kefir is created from kefir grains, which are little colonies of microorganisms. (Don’t worry– they don’t contain any gluten/wheat– they simply resemble clumped grains or cottage cheese, hence the name.) These kefir grains were originally used to fermented milk in a sheep’s stomach to become a drinkable beverage with loads of health benefits.

A Quick Note about Water Kefir….

There are two kinds of kefir: water and dairy.

Water kefir is very similar to dairy kefir, in that you can make it a home with grains. Except instead of milk, you use the grains to add probiotic-fizziness to sweetened water.

If you are dairy-free, look into water kefir instead of the classic milk-version of kefir. You can grab water kefir grains to get started right here.

However, that particular explosion was my fault (and not the norm), so don’t let it deter you. It’s good stuff. 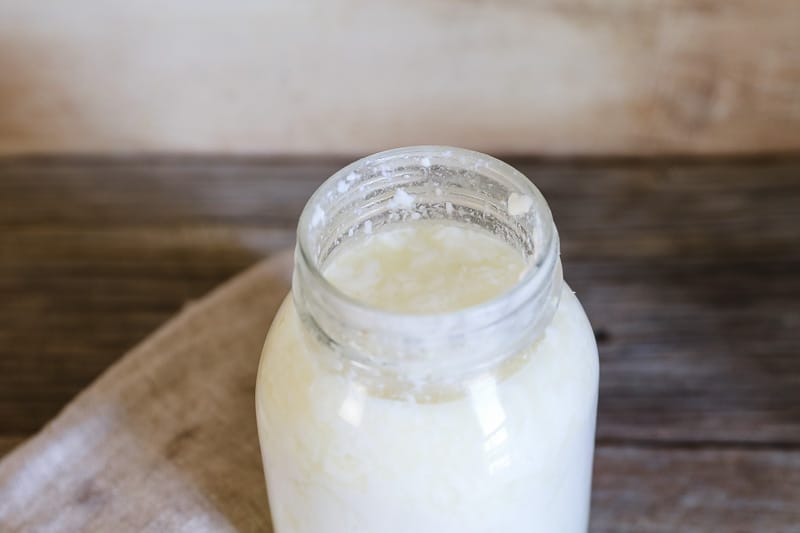 Why is Kefir Good for You?

Everyone knows that yogurt is good for you, but kefir is even better. In fact, milk kefir can contain up to 61 different microorganism strains (source).

When I had strep throat last year, natural remedies weren’t working as well as I needed, so I finally went to the doctor to get antibiotics. After the round of antibiotics, I knew that I had to increase my gut bacteria, which was damaged by the antibiotic use.

I initially sought out store-bought kefir to bolster my gut, but have since learned that store-bought kefir is often not made with kefir grains but with lab-raised bacteria. It’s still good for you, but not as powerful as homemade kefir, so once again, homemade ends up being the best option.

How to use Milk Kefir?

So whaddya do with this runny yogurt stuff?

You’ll need to replenish your kefir every 24 hours (more on feeding kefir grains below). Each time you do this, you’ll be left with the finished kefir (usually about 4 cups), which can be stored in the fridge for several weeks.

Initially, I was concerned I’d end up with 87 jars of kefir in my fridge, but my kids have been drinking it as fast as I can make it. (I like to add a little bit of maple syrup or honey* to it to lessen the tangy taste.)

Kefir is tangy like buttermilk, but it also has a bit of an effervescent snap. It can take a little while to get used to it, but I’ve found most folks take to it quickly.

In addition to drinking it straight, you can also use it in smoothies, milkshakes, or as a buttermilk substitute in many recipes (like my buttermilk biscuits).

*use code “JILL” to receive 15% off my favorite raw honey.

What Sealed the Kefir Deal for Me

When I purchased the book The Art of Natural Cheese-making by David Asher, I could scarcely believe my eyes when I read that instead of the cheese culture packets, you can use milk kefir as a culture for almost any type of cheese you can make at home.

Therefore, if you can keep your kefir alive, you don’t have to buy anymore cheese-making culture packets from the store.

(Because honestly, it has always bothered me that in order to make cheese, you have to keep buying cheese making culture packets.)

Asher writes: “Every cheese in this book [and there’s a lot of cheese recipes in this book!] and many more can be made with kefir as a starter culture. It is a universal starter containing both mesophilic and thermophilic bacteria that are adaptable to cheese-making in any conditions. Kefir grains also serve as a source of bacteria for aging cheeses because kefir contains bacterial species that feed on the products left behind by lactic acid bacteria. Kefir culture provides successions of ripening bacteria to any aged cheese. Cheeses made with kefir as a starter do not taste of kefir, their flavor is akin to traditionally made raw milk cheeses.” (source)

This is revolutionary, I’m telling ya.

Why didn’t I think to question this sooner?! OF COURSE people didn’t have little powdered packets of cheese culture back in the day… Duh.

Mesophilic cultures and thermophilic cultures are the most common cheese-making culture packets that you have to have on hand. Kefir, however, is more diverse and can be used for almost all types of cheese-making adventures. For most homemade cheese recipes, the average amount of kefir you need is about 1/4 cup, which really isn’t that much. 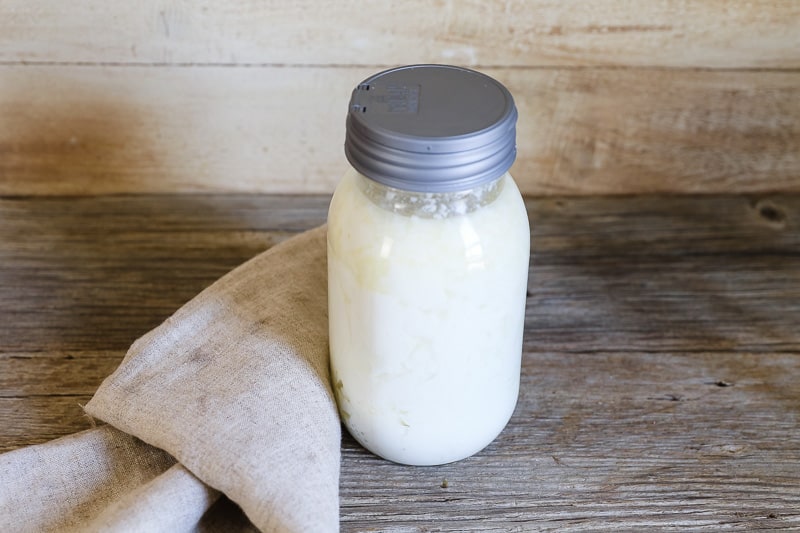 How to Make Milk Kefir

You won’t believe how easy this is… If you’ve ever kept a sourdough starter, then you will have no issue making milk kefir.

NOTE: Keep your cultures in separate areas in your kitchen to avoid cross-contamination. I like to feed mine at the same time as part of my daily morning routine.

1. Source your kefir grains. You can get them from a friend who already makes kefir or you can purchase kefir starter grains online. When the grains arrive in the mail, they’ll be dehydrated and look like breadcrumbs. Simply follow the directions that come with your kefir grains to rehydrate them. (You basically add a bit of milk each day until they are hydrated again.)

2. Once the kefir grains are active, you just need to get in a rhythm. Place the grains in a quart-sized jar and fill it up with fresh milk (I use raw milk).

3. Place the jar on your counter at room temperature and let it sit for 24 hours. The next day, the milk will be thickened. 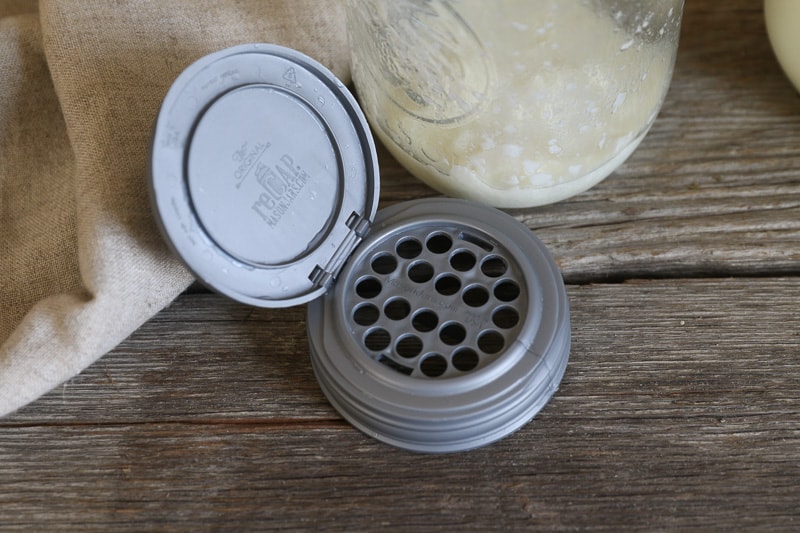 If you want to grab these awesome lids for yourself, and you do so before the last day of July 2020, you can save 20% on a set of reCAP mason jar straining lids when you use the code HOMESTEAD as you check-out. (Bonus: you can also use the lids as shakers and strainers for a million other uses in the kitchen). Anything that makes a daily task easier for me is a huge win for me.

So there you have it– I am officially a kefir fan and as I start using it in more cheesemaking techniques, I’ll keep you posted!

Do you use kefir? What are your favorite ways to flavor it?

Check out my homestead mercantile for more of my favorite homesteading and cheesemaking supplies. 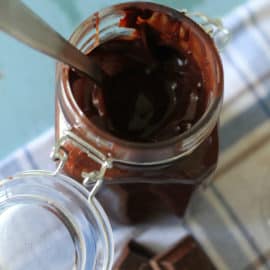 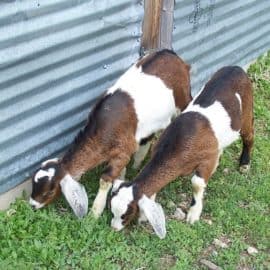 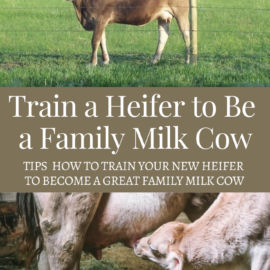 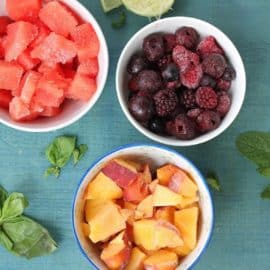