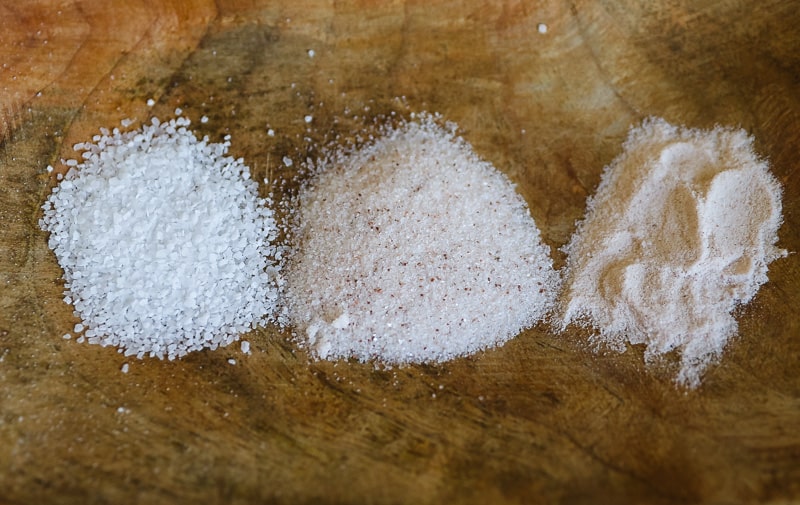 I have banned salt shakers from my dining table.

It’s not that I believe in bland food… On the contrary, I’m rather salt-obsessed.

But I believe that properly salted food is the cook’s responsibility, and so I work extra hard to ensure that all the food I serve is salted to perfection before it hits the table.

Call me crazy, but if we have to salt our food a the table, I feel like I’ve failed in the kitchen.

(And yes, when I was testing recipes for my cookbook, I was a psycho about measuring all the salt amounts… No guesses, no “I think this is close enough”… Nope. I wanted you to know EXACTLY how much salt I add so you could reproduce my recipes to a tee.)

I used to consider salt to be an afterthought…

I haven’t always cared about salt as much as I do now. I used to think it was negotiable… and that all salt was basically the same.

It wasn’t until I dove deeper into heritage-style cooking and began to educate myself on the intricacies of salt, that I realized it was, hands-on, the most IMPORTANT ingredient in my entire kitchen.

There is SO much more to salt than meets the eye.

I recently had the privilege of interviewing a salt expert on my podcast. Let me just say, I was ridiculously excited going into the interview, because I’ve had SO many questions about salt that I could never find answers to.

You can listen to my interview with salt expert Darryl Bosshardt of Redmond’s Real Salt  on my Old-Fashioned On Purpose podcast (it’s available wherever you like to listen to your podcasts).

However, I also pulled out some of my favorite nuggets from the episode in case you prefer to read instead of listen. This is fascinating stuff for us kitchen nerds! 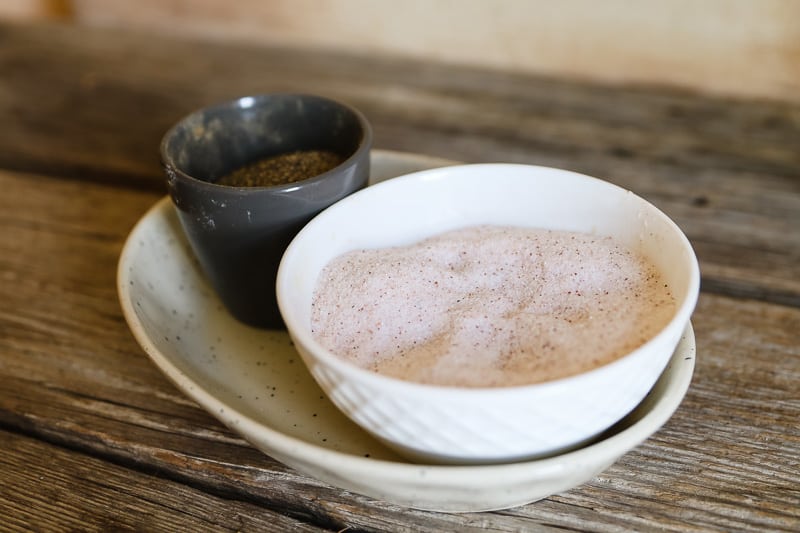 Is Salt Bad for Us?

Salt is essential for life. Without salt, everything dies, as our bodies process salt in order to function. It’s in our sweat, tears, and even urine. Salt is even necessary for animals and livestock, and salt licks are usually suggested for the health of almost all livestock.

Often, when someone goes to the hostpital, they get an IV, which is full of saline (aka salt water (source)). If you are playing sports, you might be encouraged to drink some sort of electrolyte drink which is partially because if you are exercising heavily, your body needs a lot of sodium.

So why do doctors constantly suggest you eat less salt for your health?

Unfortunately, salt has received a bad rap in recent times. The challenge with salt is two-fold:

First, the studies done on the effects of salt on our health were often done in an unbalanced way by focusing on copious and unnatural amounts of salt added to food (source).

Before refrigeration, much of the food was preserved with salt and humans did not have the health problems that are associate with salt today. This is because of the second part of the issue: our food has changed and our salt has changed.

As you know, our food has become incredibly processed, and one of the things added to processed foods is large quantities of salt.

Someone consuming a diet primarily made up of processed foods (think lots of cheap meats (hot dogs, lunch meat, etc), fast food, chicken nuggets, TV dinners, canned soups, and packaged meals) will, by default, be consuming far more sodium than they would in a simple, whole-foods diet where a sprinkle of salt is added during the cooking process.

The other issue is that salt has become more processed, too. If you look at the back of a salt container at your normal grocery store, you will see that it contains an ingredient list. It’s not just salt.

Much of our modern salt are processed, demineralized, and amended with various additives and chemicals. Because this salt is so processed, it does not react with our bodies like unprocessed, natural salt does.

Why is salt processed now?

In its natural form, salt is hygroscopic, which means it pulls water out of the air. This is part of reason we need salt to regulate the moisture in our bodies, and it’s also why salt is often used to dehumidify a room.

Since salt sucks up moisture and water, it can clump if it is not processed. The chemicals added to processed salt help it to repel moisture and flow freely out of the container.

History tidbit: this is why Morton Salt created the slogan “when it rains, it pours” for their salt in the early 20th century. Before they processed salt, whenever it rained or was humid, everyone’s salt would clump, but their company had processed it so that salt would still pour in humid conditions.

Processed salt might not clump, but it also does not function properly with our bodies. Not only that, but processed salt absolutely does not taste as good.

(Because YES. There are many different flavors of salt– they do not all taste the same.)

Whole food recipes made with high-quality natural salt (in normal amounts) are not bad for our health. 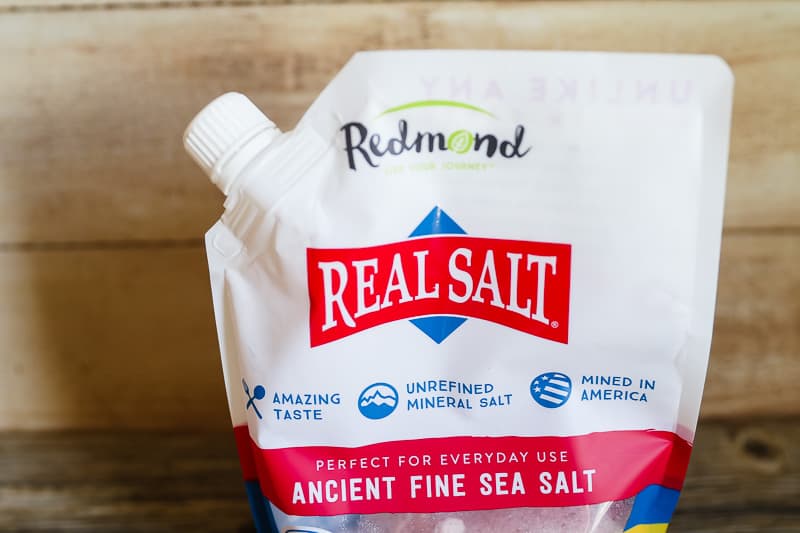 Is Sea Salt Better for Us Than Other Types of Salt?

In the 1970’s food movement, people were starting to realize that additives were being added to salt, and they correctly assumed that sea salt would be better because it was not processed. For a while, this helped people find natural salt options in a world of standard, industrially-processed salts.

Unfortunately, ‘sea salt’ has become a mostly meaningless term. Salt companies realized that people were interested in the term ‘sea salt’ and that they could get away with labeling their salt as sea salt without penalty because technically salt comes from the sea. Nearly all salt can now be labeled as ‘sea salt’ even if it’s processed or has additives.

How Can I Find Natural, Good-Quality Salt?

Check the labels! The label should say that it contains salt. That’s it. If it contains other additives and chemicals, you are looking at processed salt.

Here are a few questions to ask yourself when on the hunt for good quality mineral or sea salt:

I personally have used Redmonds Real Salt for years. This is my #1 choice for cooking and this is the salt I keep in a small bowl on my counter at all times. I love that you can purchase in bulk if you like (I recently bought a 25 lb bag of fine sea salt) or you can just buy a shaker at a time. 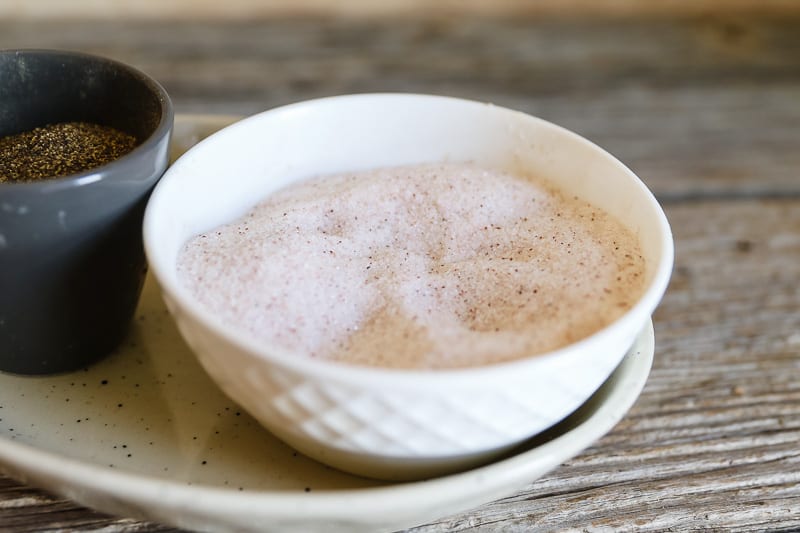 All These TYPES of Salt are Confusing!

It can be overwhelming when you realize the sheer amount of salt varieties on the market today. Grey salt, Himalayan salt, Murray river salt, Bali salt, and that’s barely scratching the surface.

Keep in mind– salt is NOT uniform in taste. Depending on where it is from, non-processed natural salt has a diverse flavor profile that you can use to your advantage, depending on the food you are preparing.

Here is just a brief look at some of the sources for natural salt:

Redmond’s Real Salt: Redmond salt is my favorite source of salt. It is located over an ancient sea bed in Utah, so it’s the closest local source of salt for me. It has brownish specks and has a slightly sweeter flavor than other salts.

Himalayan Pink Salt: This comes from an ancient sea bed in Pakistan. Himalayan salt mines contain trace amounts of iron oxide (rust), which gives the salt a pinkish color. It has a sharp and earthy flavor. (Be careful NOT to confuse Himalayan pink salt with “pink salts” intended for curing meats. They are not the same!)

Bolivian Salt: This is salt from an ancient sea bed in Bolivia. It has a sweeter flavor and is pinkish in color.

Grey Salt: This type of salt comes from a current ocean (not an ancient sea bed). The salt company will  let the ocean waters into a grey clay-lined pond. The water evaporates and leaves behind a grey-colored salt. Grey salt is not processed and has a milder flavor.

Hawaiian Salt: This type of salt also comes from a current ocean and is produced in Hawaii. The water is evaporated from red clay-lined ponds, so the salt has a reddish tint and a mild flavor.

Murray River Salt: The Murray river is located in Australia. This river contains an algae that ends up making the salt pinkish-red in color. It has a mild flavor.

Bali Salt: This salt is the natural product of the cool, windy days marking the end of the monsoon rains and is shaped like a tiny, hollow pyramid. Due to the source, it is expensive and has a subtle flavor that makes it perfect for using in small quantities on salted caramel or cookies.

What are the Different Sizes of Salt?

Salt is a crystal that can be crushed into four different sizes: 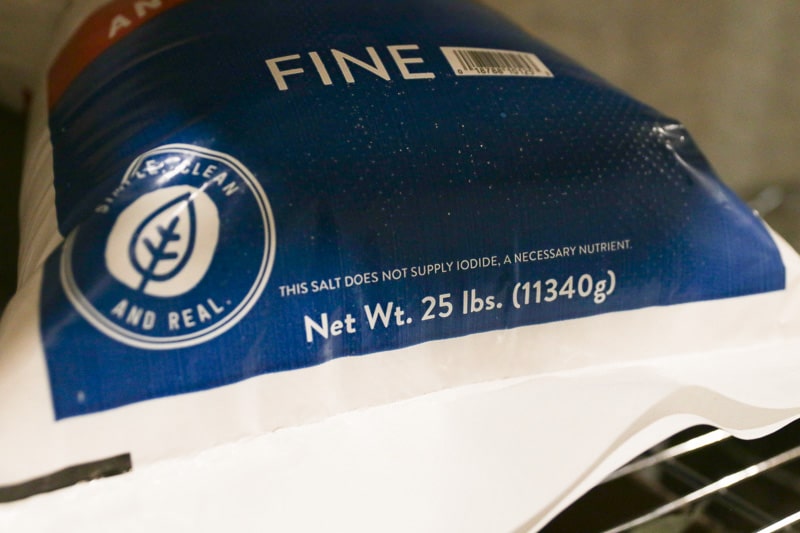 Iodine or No Iodine?

When it comes to natural salt, there is always a lot of concern about iodine deficiency.

In our modern times, people connect iodine and salt together. However, historically, salt and iodine were never connected.

During World War I, the military was trying to draft men from the Midwest, but there were goiter issues (iodine deficiencies) in that region of America. This was due to the midwest not eating a lot of seafood and natural foods that are rich in iodine and also because the soils in the Midwest were depleted of these natural minerals.

Therefore, instead of encouraging the public to eat natural foods rich in iodine, the military decided that they would add iodine to salt (learn more about iodine and salt here). It would be a surefire way to increase the population’s salt intake, since everyone had to eat salt, right?

Iodine is a necessary nutrient and we still do not get enough iodine in our diets. Adding iodine to salt worked for fixing goiter problems, however, encouraging eating more iodine-rich natural foods would would have been better for our health. 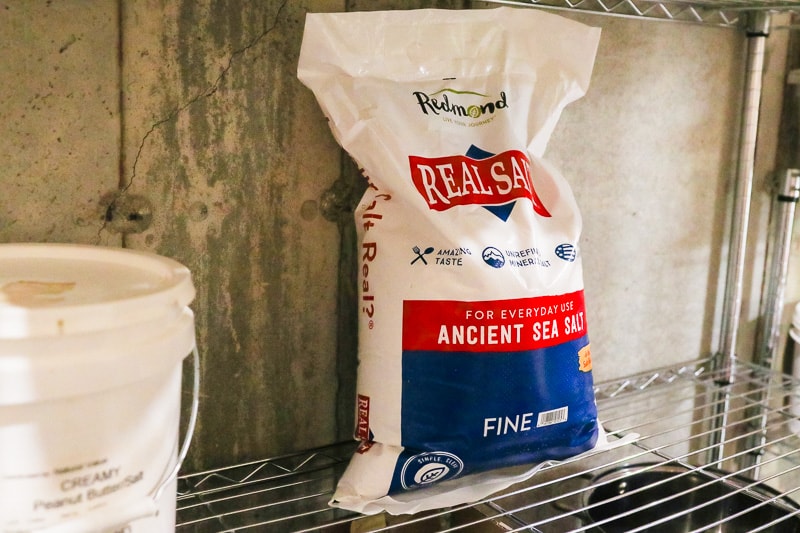 Salt is fascinating stuff. We can’t live without it and I wouldn’t want to. A sprinkle of salt on a slice of perfectly ripe avocado, or a warm, summer tomato from the garden makes all the difference, and once you start using a GOOD salt in your kitchen, you’ll never go back.

I’m SO impressed with Redmonds, I asked them if they’d provide my readers with a discount for a limited time, and they generously agreed.

Use code HOMESTEAD when you check out to save 15% on your whole order. (Might I suggest checking out their fine sea salt in bulk and their powder popcorn salt? Those are two of my favs).

Plus, you’ll get free shipping on orders of $35 or more, only for the month of June.

So, go forth and stock up that pantry– never run out of GOOD salt ever again.

And don’t worry, if you come to my house for supper and ask for a salt shaker, I’ll bring it out of the cupboard. No hard feelings. 😉 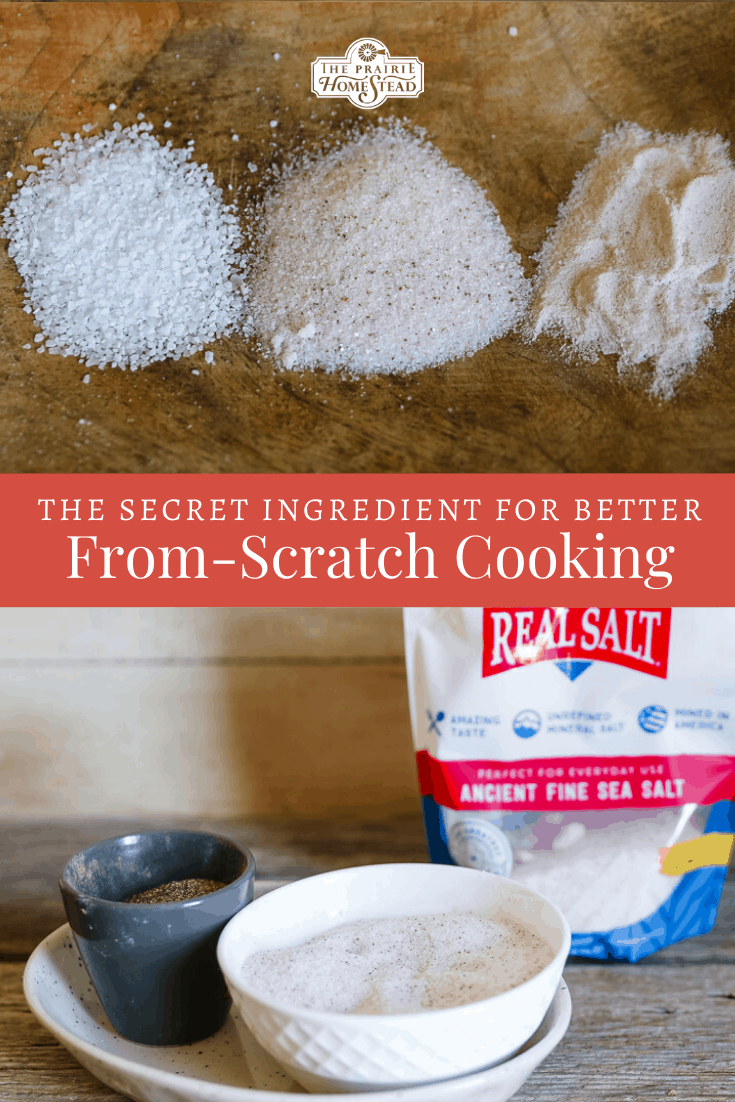 Prefer to listen in? Listen to the Old Fashioned On Purpose episode #133 on this topic: 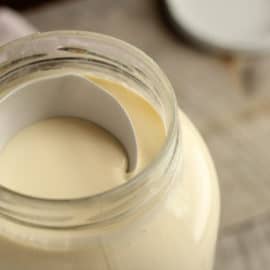 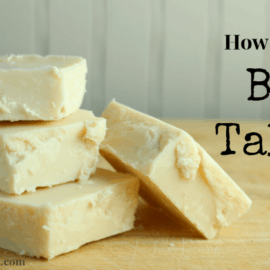 How to Render Tallow 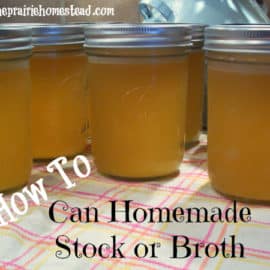 How to Can Homemade Stock or Broth 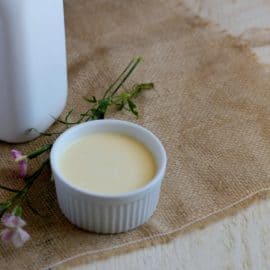 How to Make Sour Cream