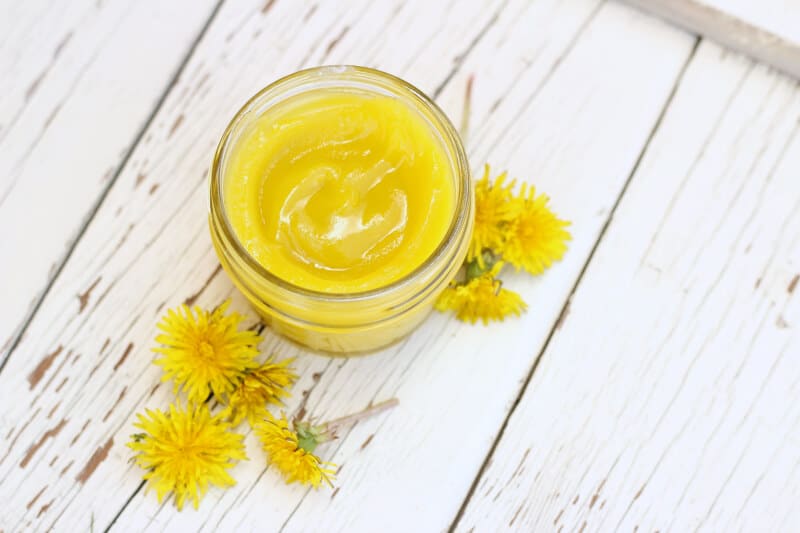 It’s that time of year…

…when shriveled dandelion bits litter my kitchen, and desk, and float in random cups half-full with water.

Every single time my 3 year old brings me a fistful of fuzzy yellow flowers, I can hardly bear to throw them away, even after they have wilted beyond recognition. Picking dandelion blossoms is a childhood rite of passage.

I used to consider the predictable yellow flowers popping up each spring to be a nuisance. Something to be eliminated or (*gasp*) even sprayed. But I have seriously changed my tune, even before I had grubby little toddler fingers picking them for mama.

As I’ve learned more about the plants growing wild on our homestead, I’ve come to wholeheartedly agree with Ralph Waldo Emerson when he said, “What is a weed? A plant whose virtures have not yet been discovered.”

I’ve learned how to enjoy lambs quarters, purslane, prairie mushrooms (no, NOT the hallucenogenic kind, thankyouverymuch.), and yes, even dandelions.

The only weed I have yet to reconcile with is the stubborn yellow dock that is attempting to overtake my garden (yes, even WITH my heavy layer of hay mulch…) but I haven’t given up hope that I’ll find a use for that eventually. (But for now, I’m hacking it with my hoe, because it’s driving me crazy.)

It’s boggles my mind how obsessed Americans are with eradicating dandelions when they have SO MANY potential health benefits, including:

Although there are tons of ways to eat the things, I have been especially interested in dandelion’s muscle soothing properties lately and wanted to make a dandelion salve for those long days spent outside working in the garden or fixing fence.

The Prairie Kids were THRILLED to have a new purpose in their incessant dandelion harvesting, and it only took us a few minutes to fill a colander with enough dandelion blossoms to make a big batch of muscle salve. 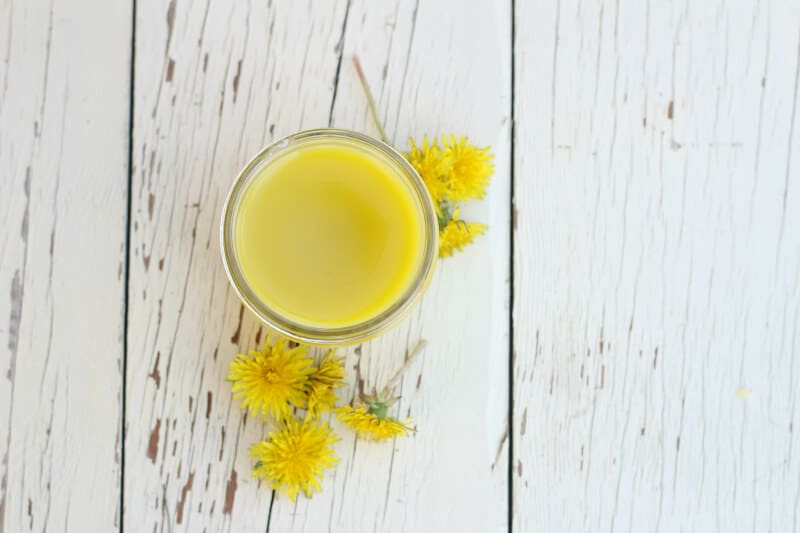 Allow the dandelions flowers to dry overnight to remove a bit of the moisture content, then add the wilted flowers and olive oil to a small saucepan and gently bring to a very slow simmer. Allow the flowers and oil to gently simmer for 2-3 hours. 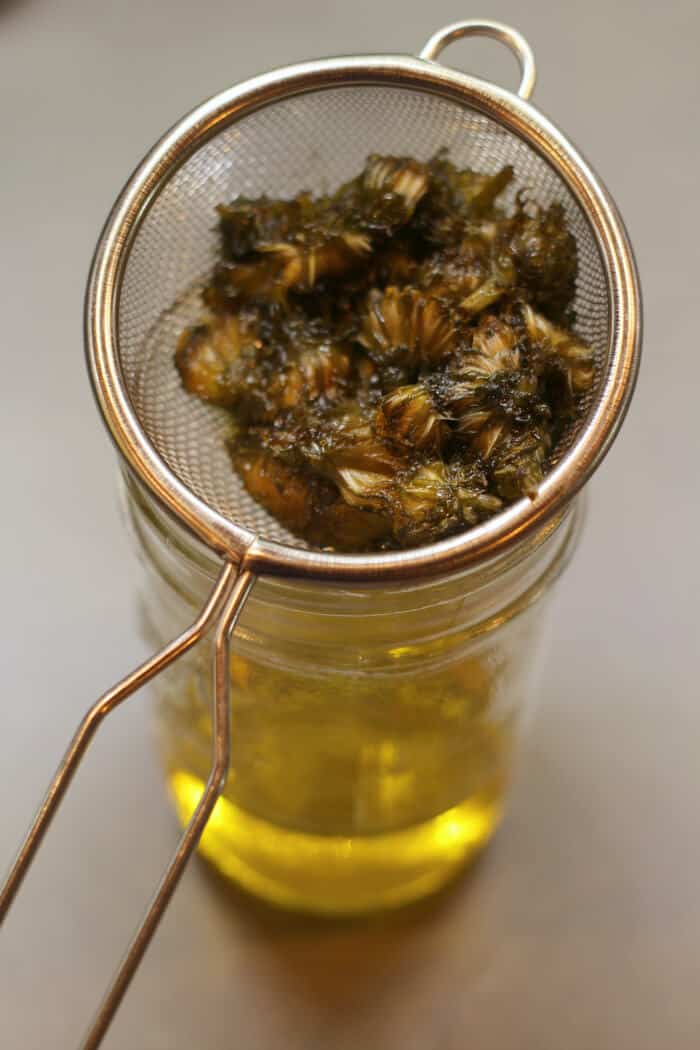 Strain out the flowers, and store the finished oil in a cool, dark place.

(Alternatively, you can do a solar infusion and simply add the flowers to the oil and allow them to sit in a sunny window for 2-4 weeks. This will give you the same result (a dandelion-infused oil), but just takes longer)

In a double boiler*, gently heat the dandelion oil and beeswax pellets.

Stir over low heat until the beeswax is fully melted.

Remove from the heat, and allow to cool for several minutes, then add the essential oils (if using). Pour into small glass jars or tins, and allow the dandelion salve to set up for several hours. 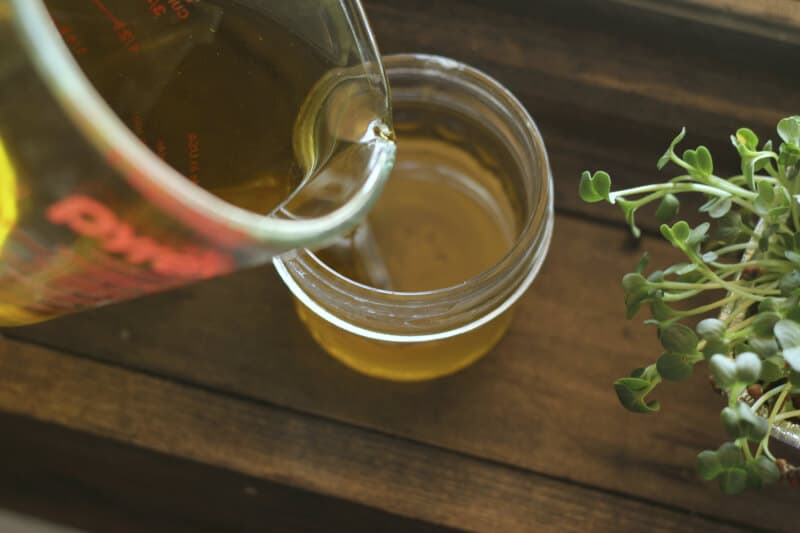 Store in a cool, dry place and rub onto joints and muscles after those long homestead work days.

*If you don’t have a double boiler, simply place an oven-safe bowl or cup in a small saucepan filled with water, and melt the beeswax/oil mixture in the bowl or cup. 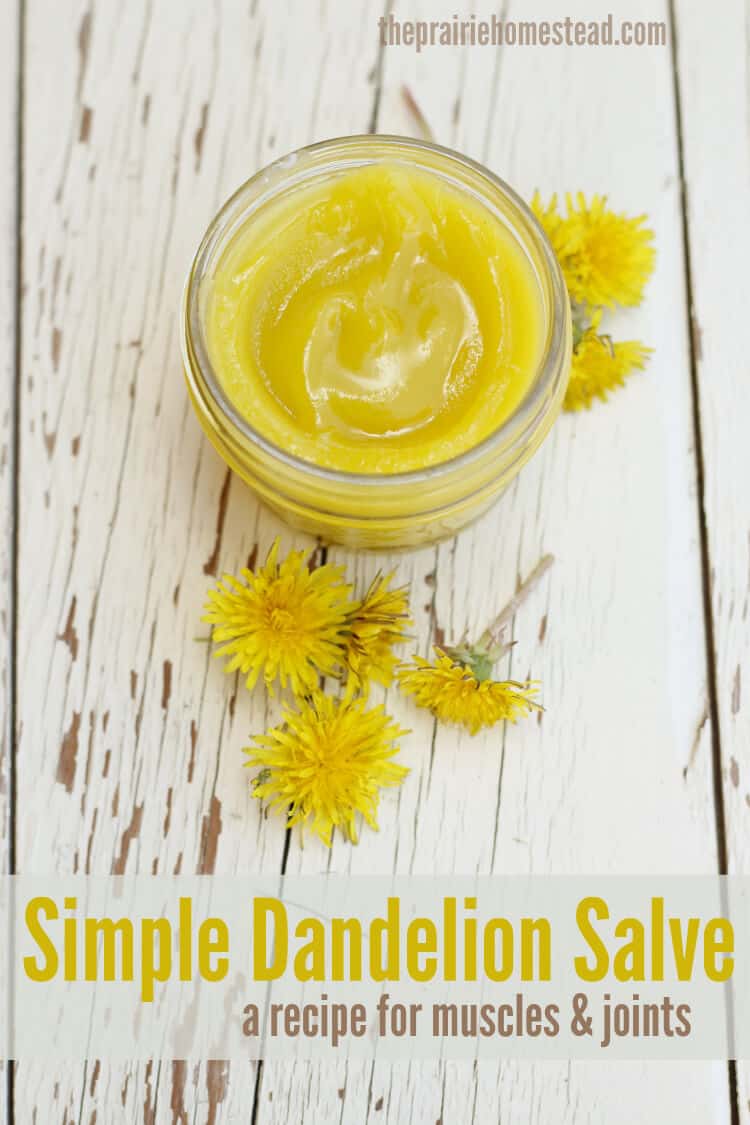 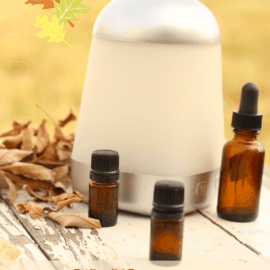 The Best Autumn Essential Oil Recipes for Your Diffuser 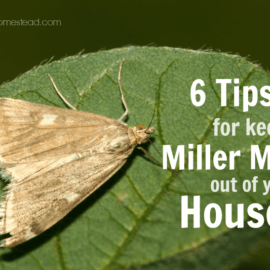 6 Ways to Keep Miller Moths Out of Your House 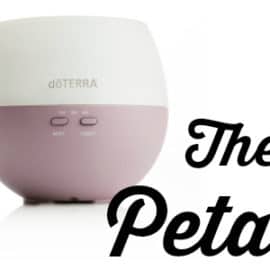