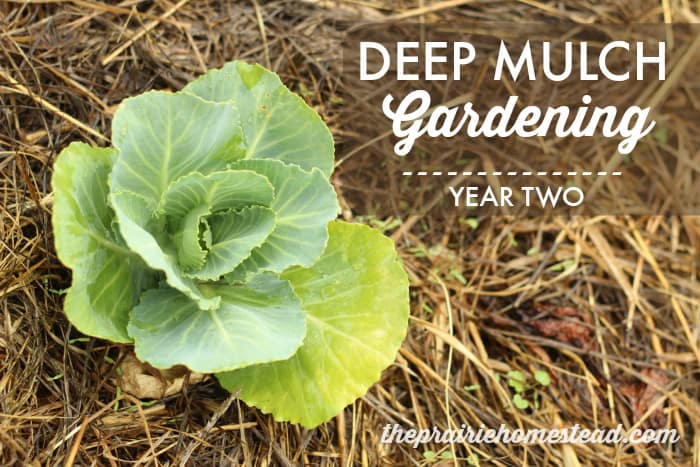 Lest you think the Prairie Homestead girl has it all together and things always run smoothly, let me be the first to assure you, they most certainly do not.

I’ve had more than my share of flops over the last six years of homesteading, including horrendously awful dehydrated eggs, a hugelkultur bed that refused to grow anything the first year (not even weeds), goats that annihilated my very expensive trees (multiple times), and the list goes on… And on…

But last year, I happened upon something that actually worked. And it worked darn well.

For those of you who’ve been following me for a while, you’ve heard me singing the praises of the deep mulch gardening method. I stumbled upon it last year and nervously decided to take the plunge. I had nothing to lose, considering my garden was completely overtaken by massive amounts of weeds, and I was getting ready to throw up my hands and add gardening to my list of massive FAILS anyway.

So I tossed some hay (Ok… not some… it was actually a LOT of hay) on the garden, held my breath, said a prayer, and waited to see what happened.

You can see my fantastic results in this post, but needless to say, I was hooked.

After last year’s amazing harvest, I was dead-set on repeating the method again this year. So I covered my garden with a fresh layer of hay last fall, and began to scheme for this year’s growing season. 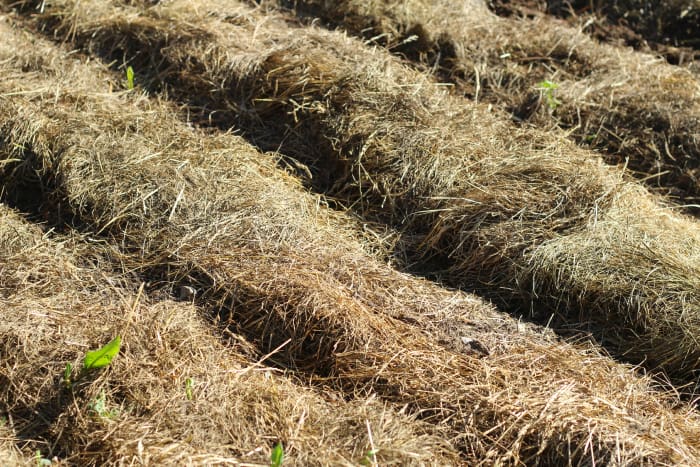 And then the doubts started creeping in…

“So now that you’ve told the whole world how much you like the method, what if it doesn’t work in subsequent years?”

“What if the ground is as hard as a rock next year?”

“What if year #2 is a total flop and you have to scrape off allllll that hay and start over?”

Oh boy… what did I get myself into?

I nervously waited for planting time and hoped and prayed I hadn’t led you all astray.

After our monsoon rains finally stopped, I dutifully grabbed my bucket of seeds, threw the pitchfork over my shoulder, and headed out to the garden.

I pulled the hay aside, took a deep breath, closed my eyes, and plunged my pitchfork into the earth…

When I finally raised one eyelid, I stood there with a gaping mouth.

On the end of my pitchfork was the richest, moistest, most worm-filled dirt I had ever seen. 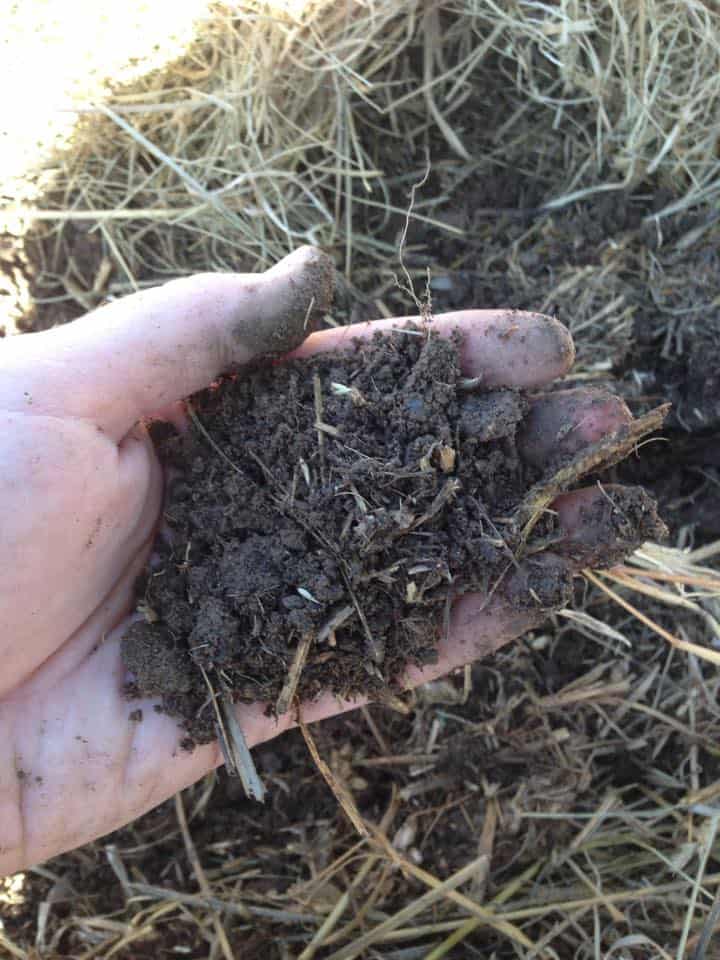 After I did a small happy dance, I proceed to plant every bit of my garden, without a rototiller in sight.

When I posted a pic of the soil on my Instagram account, I got lots of questions, so here are all the down-and-dirty details about round two of my deep mulch garden adventure—>

My biggest fear I faced was the ground becoming rock-hard after winter’s worth of weather, winds, and snow.

Last fall, I had made sure to cover every square inch of the garden plot with a generous layer of mulch, but I had no idea what it would look like when I uncovered it this year.

In my previous traditional gardening efforts, by the time planting rolled around each spring, the exposed ground would be dry, crusty, and hard, with a complete carpet of weeds covering the whole thing. 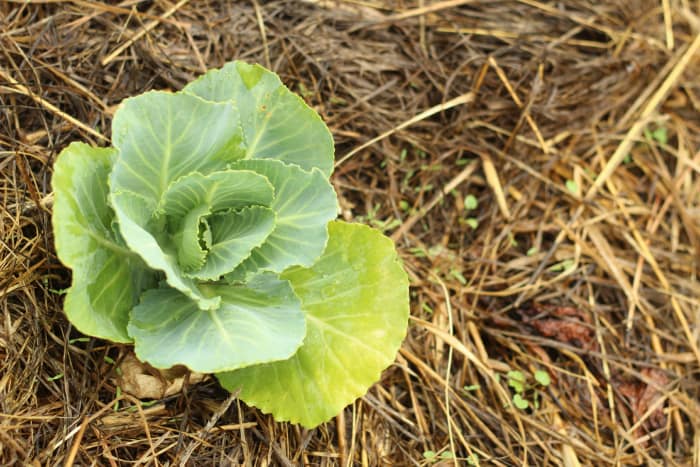 Task #1 was always to drag out the rototiller, work the soil, and plant as fast as I could before the weeds start coming back.

I had a few stubborn weeds popping up through the hay mulch as I waited for planting season to arrive, mostly wear I had allowed the mulch layer to become too thin, but that’s it.

And as I mentioned above, the traditionally dry, crusty soil was instead, moist, dark, and rich.

However, the most shocking part to me was the sheer number of worms I found as I dug. We’ve had *some* worms in the past, but this year, nearly every single time I dug into the earth I would pull up at least one worm. It ‘s crazy, I tell ya. Crazy!

How I Planted This Year

This year’s planting efforts closely mirrored what I did last year:

1. First, I pulled back the hay to form rows where I wanted them

2. While the soil was still very moist and soft, thanks to the mulch, I still stuck my pitchfork into the soil and turned it/shook it a bit– just to prepare it a bit for the seeds. It took me about three minutes to work an entire row with my pitchfork, and it was far from back-breaking. 🙂

3. I planted the seeds in the soil. (I used my hand to break up any big clumps I found, and to smooth the surface out a bit, as needed). As the seedlings come up, I will pull the mulch around them.

Did I mention I didn’t need my rototiller for the first time in six years?! I want to scream it from the roof tops. I want to throw a rototiller-retirement party. My goal of a no-till garden is finally becoming reality!

I only spend a few minutes each day in my garden (mostly admiring my work, *ahem*). But here are a few things I check on a regular basis:

1. I check to make sure the mulch hasn’t blown/moved across the rows. This happens infrequently (which is surprising, considering the violent thunderstorms we’ve had), but you want to make sure the hay isn’t snuffing out any emerging seedlings. 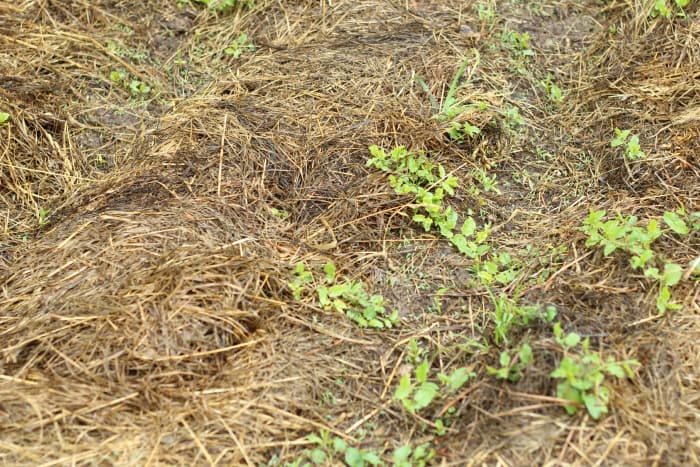 2. I adjust the mulch or add more mulch to any area that seems sparse. Last year’s mulch is still going pretty strong, however, I added around two extra small square bales to this year’s garden, just to fill in some gaps.

The above photo shows some of my sparse spots with the weeds that did pop up. It’s still pretty impressive, considering in the past I would have had a complete carpet of weeds by this time with my previous method. These are the areas I covered with fresh hay.

3. I water as needed, and pick/cover any weeds that are trying to pop up. The most “intense” period of weeding is while I’m waiting for the seedlings to emerge. During this time, I weed along the rows and between the new seedlings. However, once the plants get a bit bigger, I will pull the mulch around the plant, which reduces the weeding even further.

My Results so Far? 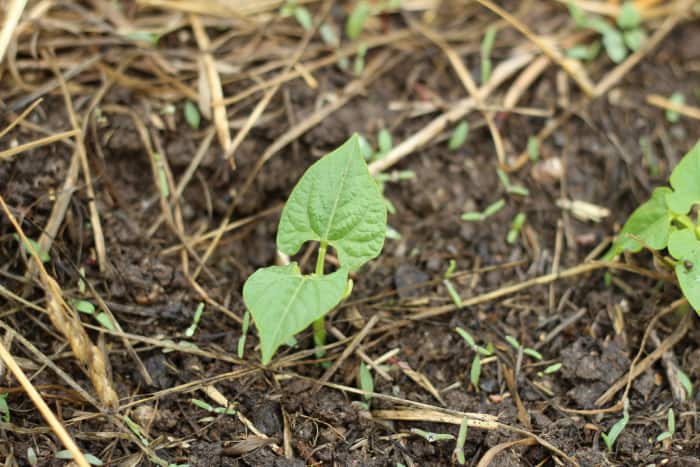 We’re cruising right along! It’s still early in the game, but so far, so good. My pumpkins, lettuce, kale, and beans are sprouting (we were late to planting this year, thanks to one of the rainiest springs on record…), the onion sets, cabbages, tomatoes, and broccoli I transplanted have all happily taken to their new homes, and everything else is right on track.

I’ll keep ya updated as the season progresses, but at least for now, I’m happy to report that my deep mulch gardening efforts appear to remain a success.

Grab my deep mulching ebook explaining the whole process– start to finish– for FREE. I included a ton of pictures, FAQs, and my best tips, too—> 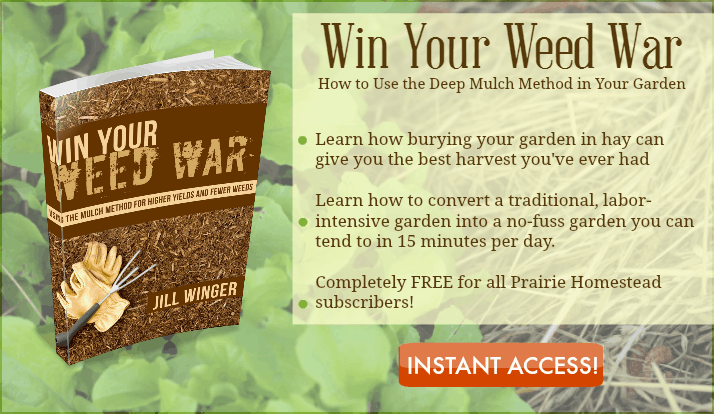 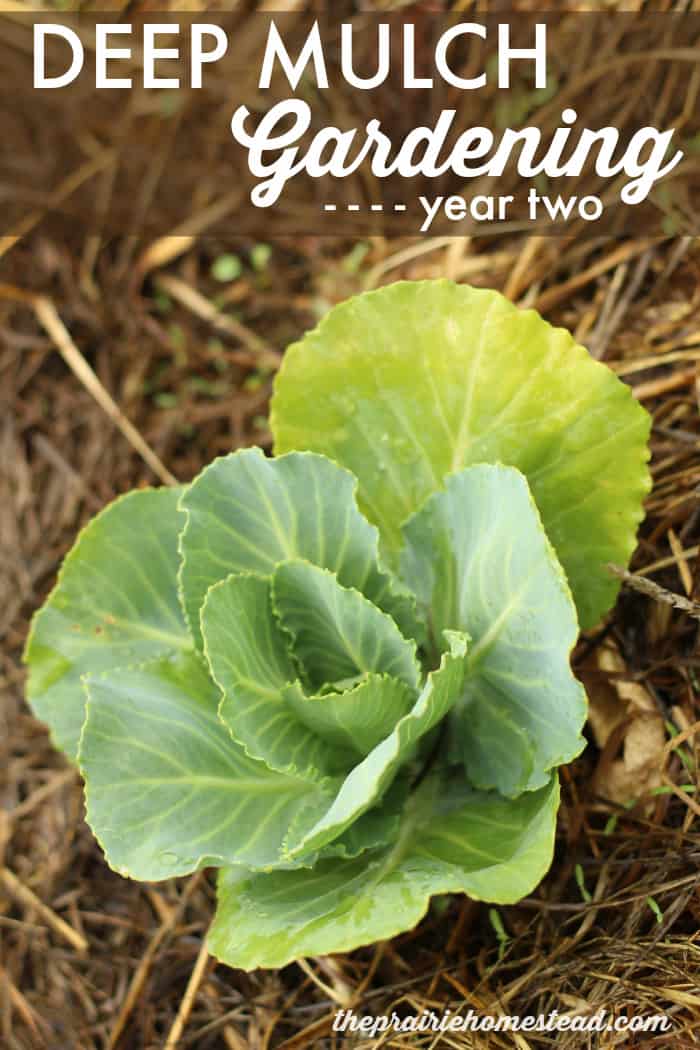 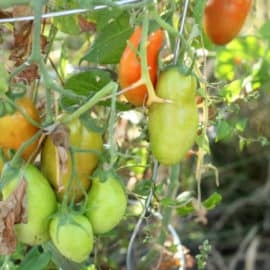 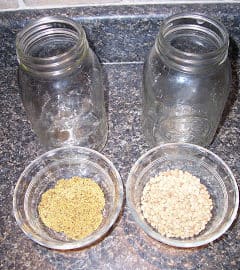 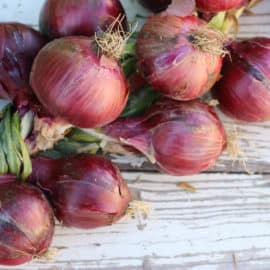 How to Braid Onions 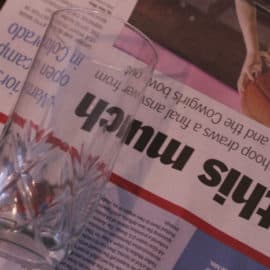