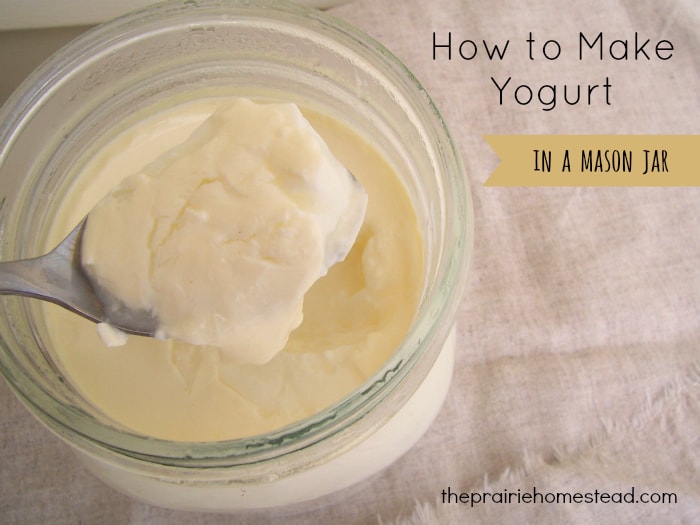 There are lots of reasons to make your own yogurt. But the most important?

Okay… so maybe that isn’t the *most* important reason, but it sure is fun.

And besides the rockstar-thing, homemade yogurt is super nutritious (hello probiotic-goodness without all the flavorings and additives…) and pretty darn frugal, too.

There are a million-and-one ways to make yogurt, and everyone seems to have their favorite method–Crockpot, yogurt maker, etc

I’ve tried a bunch of different methods, but I’ve settled on the one I’m sharing today. It’s the simplest yogurt method I’ve found (in my opinion), and I like that I don’t have to wash out my big ol’ stockpot or slow cooker when I’m done.

I like to make a gallon of yogurt (4 quarts) at a time since it stores for a long, long time without going bad. If you don’t want to make quite that much, this yogurt recipe can easily be halved or quartered.

How to Make Yogurt

Fill all four jars with milk, leaving a little room at the top– (around 2 inches). If you don’t have canning jars, you can use other repurposed glass jars instead. (It has to be glass- no plastic allowed!) 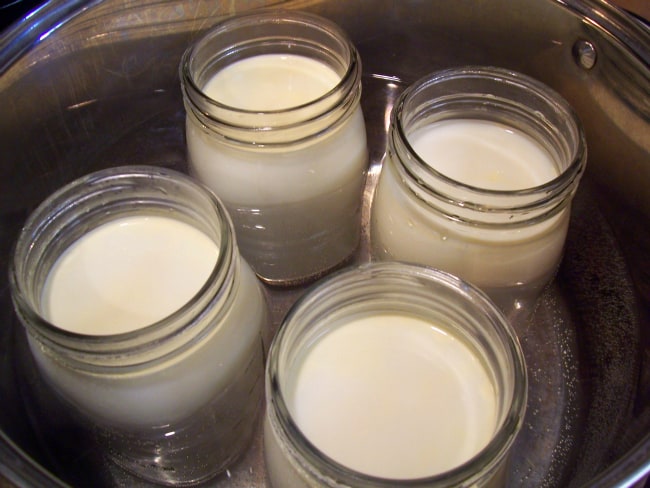 Place all four jars in the stockpot, and fill the pot with water. I usually shut it off when the water is about 3/4 of the way up the sides of the jars. If you are concerned about the jars rattling and breaking, you can place a small dishrag in the bottom of the pot before you set the jars inside.

Set the pot on the stove and bring the water to a boil. Allow the pots to simmer until the milk in the jars has reached 180-185 degrees F. (If you don’t have a thermometer, just look for a “skin” to develop on the top of the milk.) If the milk goes beyond 180 degrees, don’t worry- it’s not the end of the world.

Carefully remove the jars from the pot (HOT!) and allow them to cool down to 110-120 degrees F. Now there are several ways to accomplish this. Some folks advise sticking them a sink filled with cool water, but I’ve found that leads to a lot of broken jars… So instead, I take the lazy way and just allow them to sit on the counter until they have cooled. I loosely cover the jars with a lid and let them sit for 30-60 minutes (I want the heat to be able to escape, but I don’t want dust/dirt/bugs getting inside.)

Check them periodically with your thermometer and give the milk a stir to mix up any hot spots.

If you don’t have a thermometer– just feel the outside of the jars. You want them to be warm, but not too hot to touch. You are going to innoculate the milk with a live bacteria, and the bacteria likes warmth. However, too much heat will kill it– so anything that is too hot for your hand is probably too hot for the yogurt bacteria as well.

Once the milk has cooled sufficiently, gently stir 2 Tablespoons of yogurt into each jar and cap the jars (I never really measure– I just eyeball it…). Now, the incubation process begins.

There are a lot of different ways to keep your yogurt warm. Some folks like to stick it in their oven and leave the light on, but that is a recipe for disaster at my house. (I can be scatterbrained sometimes…) Therefore, I prefer the cooler method.

You’ll need to keep the yogurt at 110-120 degrees while it incubates, and the easiest way I’ve found to do this is to place the jars in a small cooler, and then fill the cooler with warm water. You might need to replenish/reheat the water once or twice throughout the process, but for the most part, it works pretty darn good. Just make sure to keep the cooler in an out-of-the-way place and don’t bump or move it.

Allow the yogurt to incubate for a minimum of 8-12 hours (I generally start my yogurt around 9 am, and then remove it from the cooler right before I head to bed). You can leave it longer if you like, but the longer it sits, the tangier it will get. Once the incubation process is complete, remove the jars and place them in the fridge. Allow the yogurt to cool completely before eating (it will thicken a bit as it cools).

Eat plain or flavor it to your liking. Our favorite toppings are fresh fruit, maple syrup, raw honey, homemade jam, or nuts.

Homemade yogurt is also splendid in smoothies, or use my soft-cheese recipe to make yogurt cheese and whey (and we all know there are LOTS of uses for whey!). 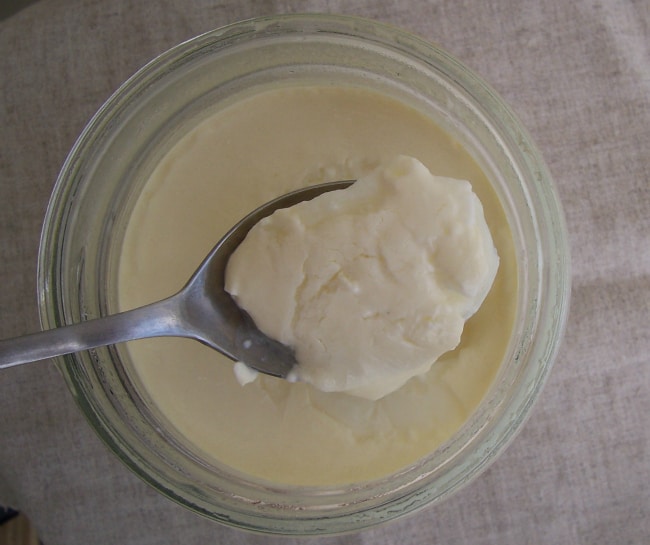 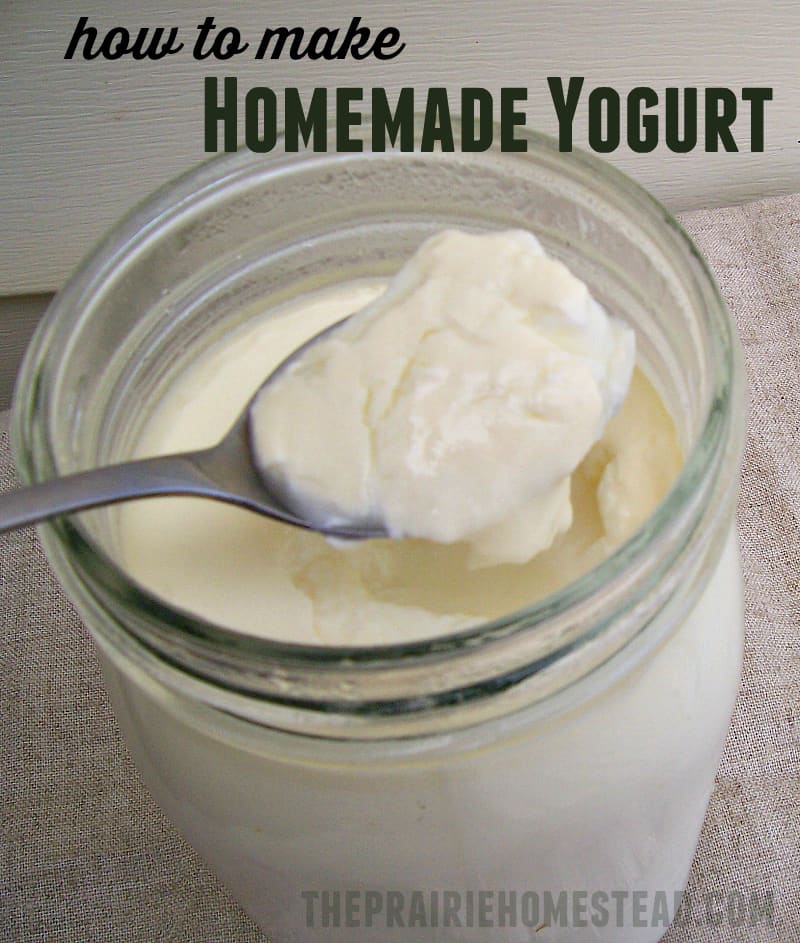 How to Make Yogurt in a Mason Jar 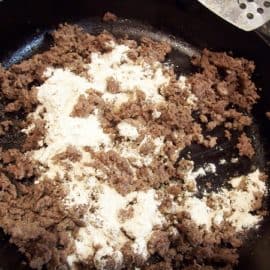 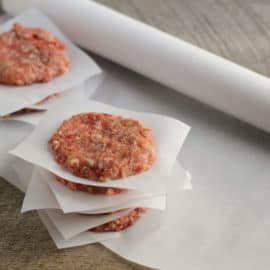 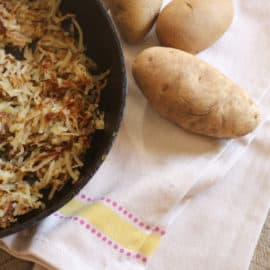 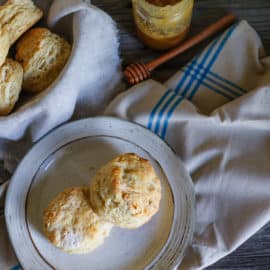