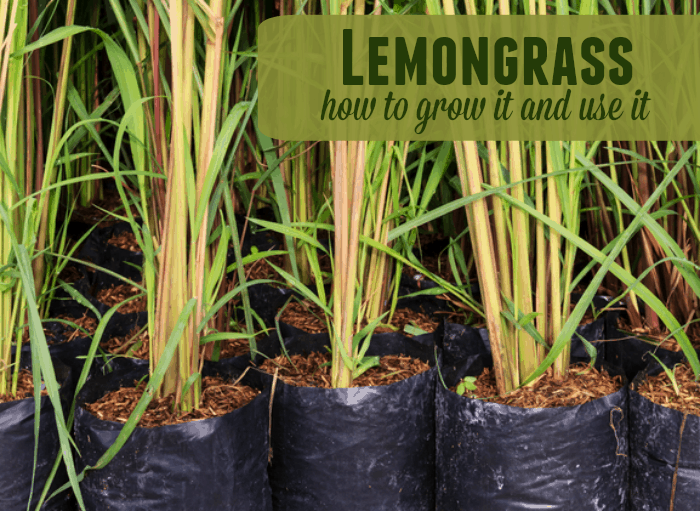 I first came across lemongrass while visiting a farmer’s market in Florida while we were traveling.

The little old man handed me a bunch of lemongrass stalks and said, “You put those in water and they grow again.” He picked up another stalk and showed me how to chop it and use the inner part of the lemongrass. It smelled amazing when he chopped it up, and I bought a couple of bunches of lemongrass.

Since then, I’ve used lemongrass to add a “what is that!” element to rice; to add a light, slightly spicy lemony flavor to smoothies (not to mention all its purported healing properties); and in all sorts of variations of stir-fries and soups.

As the old man promised, when I stuck the ends of the lemongrass in a jar of water, they did begin to sprout roots. I’ve moved twice since that time, and haven’t been able to take my potted plants across the borders of the new states we’ve moved to, so I’ve regrown lemongrass both from stalks found in oriental shops and from seed.

Growing lemongrass isn’t that hard. Once you get a thriving bunch established, you’ll have more lemongrass than you know what to do with. 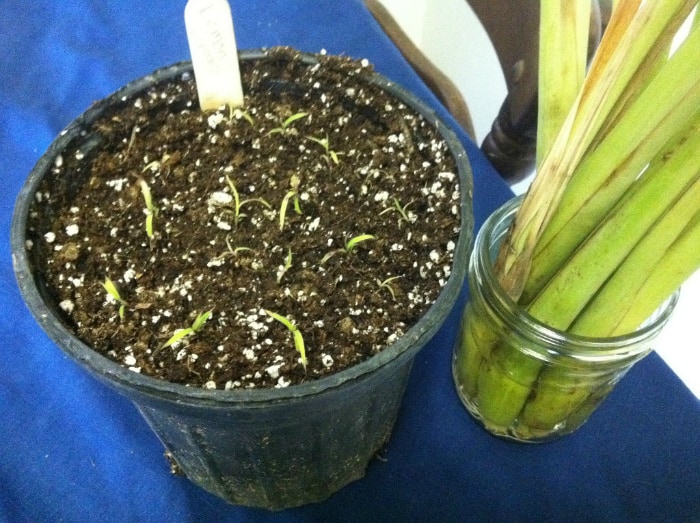 How to Grow Lemongrass

Lemongrass is a sub-tropical plant and it can’t handle hard freezing temperatures. If you live anywhere colder than about a zone 9a, you’ll want to grow your lemongrass in a pot, and bring it indoors for the winter. And even then, you might want to bring it in, just in case you get an unexpected temperature drop (the weather seems to be doing all sorts of funny things these days).

Grow your lemongrass in full sun, with plenty of water, in a rich, well-draining soil. If you’re growing it in a pot, top-dress it with compost or worm castings every couple of weeks, to make sure it’s getting plenty of nutrients.

Lemongrass will naturally propagate itself, once it is established. Small stalks of new plants will begin to grow off the side of existing stalks (see picture below).

There are a handful of different varieties of lemongrass, though a lot of times, it’s not specified which variety you’re purchasing, whether in seed form or in stalks. I’ve grown at least two different varieties of lemongrass, though I don’t know what they’re called. I only know they were different because one had red streaks along the lower half of the leaves, and the other one didn’t.

True Leaf Market has a great variety of lemongrass seeds available. Additionally, learn where to find heirloom seeds for your garden here. 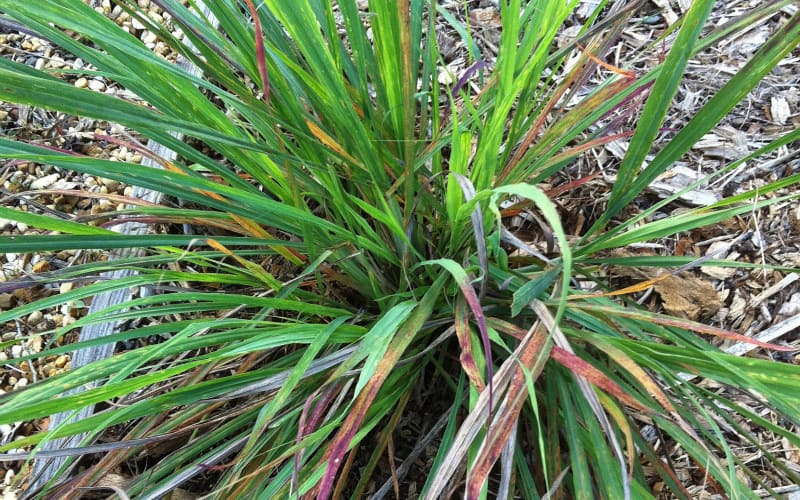 Lemongrass will germinate within a week or two, and if our experience is typical, the seed has a high germination rate. Keep the seeds moist and in a warm spot until they germinate. Transplant them to a pot (these planter tubs would be a great option) when they’re about six inches tall, spacing them about 2-3 inches apart, and making sure they’ll have plenty of space for good root growth.

If you want to root your own lemongrass from stalks bought in a store or at a farmer’s market, simply place them in a jar with an inch or two of water, and let them sit until the roots begin to grow. Be sure to change out the water every couple of days. Once you begin to see new leaves growing, you’ll know that the lemongrass has enough roots and you can plant them in a pot. 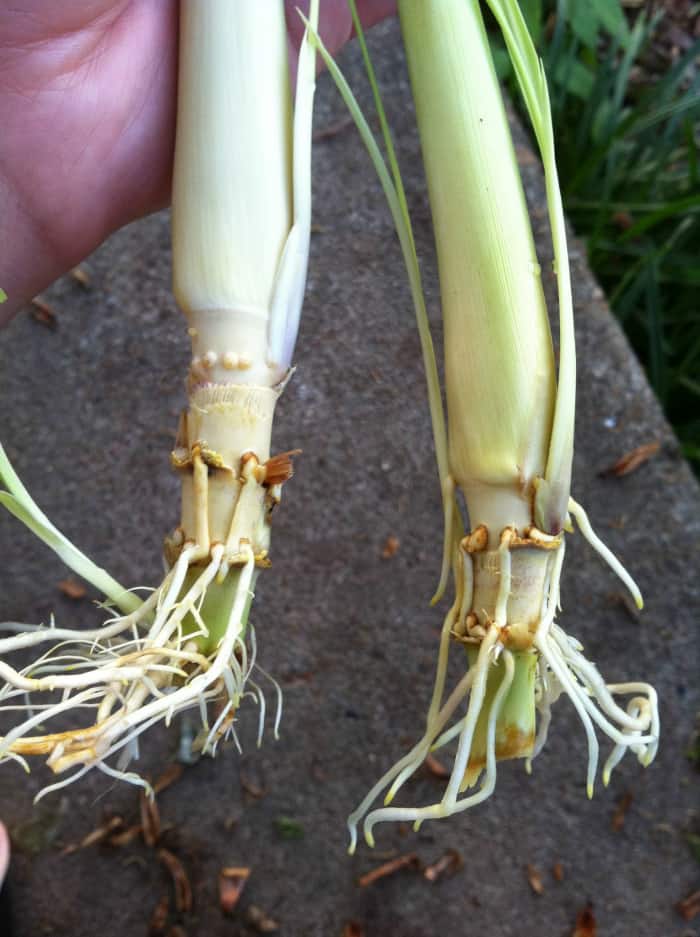 To harvest a stalk of lemongrass, grasp firmly near the base of the stem and pull. The inner, white core is what is used in cooking, though the leaves can also be used to make a light, lemony tea.

Remove the outer green leaves and finely chop or grate the lemongrass. When I use it to flavor plain rice, I put the chopped lemongrass in a kitchen muslin bag and sink it in the water the rice is cooking in. Once the rice is done, I simply remove the bag.

A Few Lemongrass Recipes to Try:

I’ve loved milk since I was a kid, I tend to collect books, my favorite season is fall, and I’m very allergic to cats. I’m a nutritional therapist, having obtained a Bachelors degree in Dietetics, but without the further qualifications to become a registered dietitian (I got married & had a family instead). I blog at Homestead and Gardens. 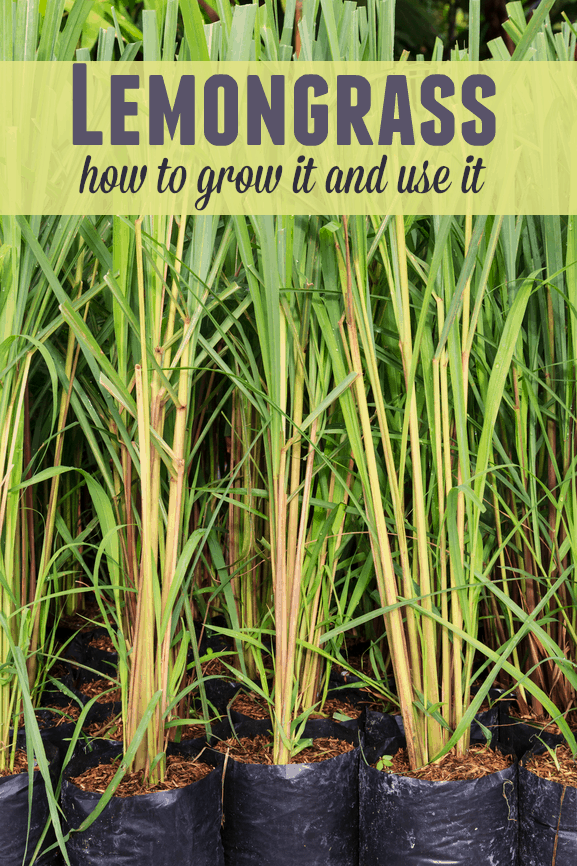 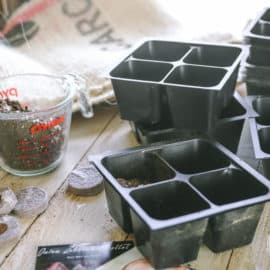 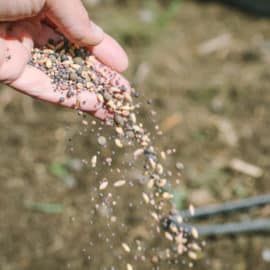 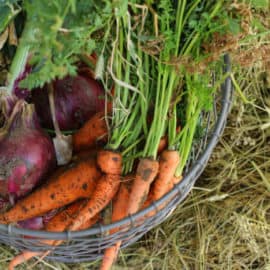 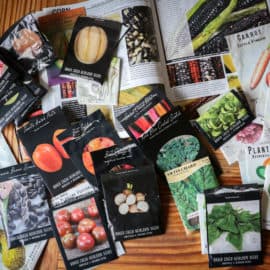 Where to Buy Heirloom Seeds