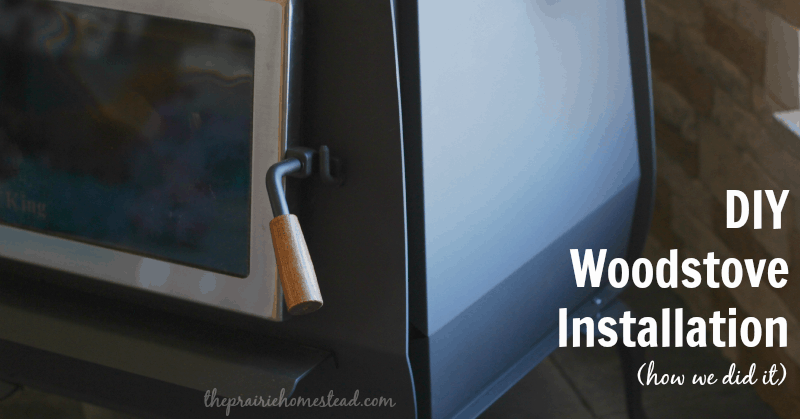 We’ve been cold for a while now…

… Our farmhouse came with a propane furnace when we bought it. But even though the house is pretty small, the poor little furnace just couldn’t keep up–especially with the 60+ mph winds we get in the winter…

We avoided the idea of a wood stove for quite a while. Not because we don’t love wood heat (because we do!), but mainly because our living room is tiny, and the thought of giving up a big chunk of our precious space to a wood stove and hearth made us cringe.

But enough was enough. We finally got tired of paying thousands of dollars each year to heat the house, especially when it never was really warm anyway.

Many of you over on the Prairie Homestead Facebook page have been following along with the installation process. I’m hoping this post will help to answer a lot of your questions–we’re definitely NOT claiming to be wood stove experts, nor is this the “definitive” guide to heating with wood, but it will walk you through our thought processes and hopefully give you some ideas if you have a wood stove on your own wish list. 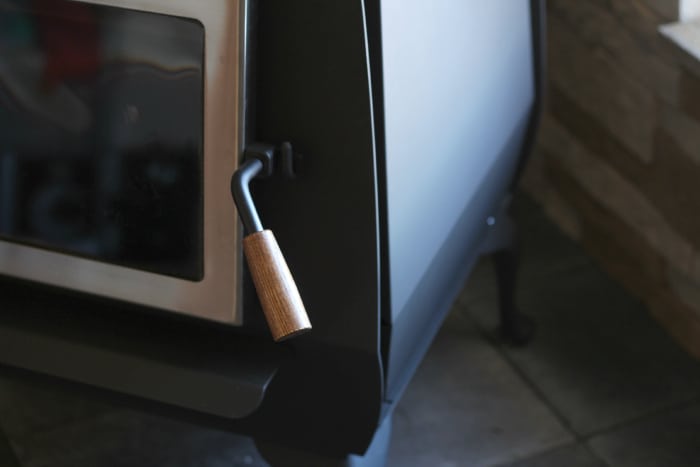 Picking out the wood stove we wanted was… daunting. There are a bazillion different options out there with various features.

We had the following requirements:

1. It had to be as small as possible, or at least have the ability to sit close to the wall, since we need every spare inch of space in the living room.

2. It had to be very efficient. We wanted the stove to become our main source of heat–it needed to burn for a long time and not use a crazy amount of wood. Neither of us had the desire to be stoking it every two hours–at least not if we could help it.

3. We wanted a catalytic converter. Now–there are varying opinions about these online, and some folks don’t like them. But after a lot of research, we decided it would be the most efficient and cost-effective option for us.

4. Having the stove available from a local dealer was important, so we could see it in person and avoid shipping costs. 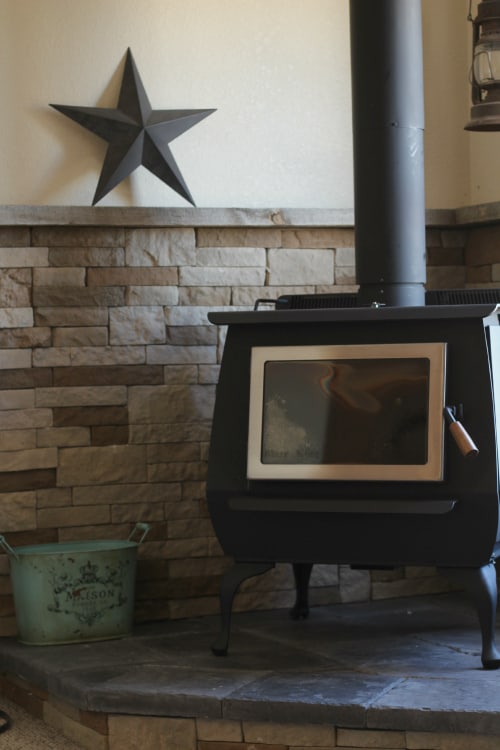 After a lot of Googling, phone calls, and visits to local stove stores, we decided on a Blaze King (the Princess model).

1. Blaze Kings have a good reputation and are considered to be quality stoves. Plus, they were available locally for us.

2. Although the Princess model is NOT the smallest option in terms of footprint, it has optional heat shield attachments, which allow us to set it close to the wall. Some of the other small stoves out there are absolutely adorable, but they must be set out several feet from all walls, which would make it stick waaaay out into our living space.

3. The Princess model has a catalytic converter, which makes it ideal for using as a primary source of heat in your home. You can load it full of wood, set the thermostat, and basically leave it alone.

Now, it’s not the cheapest option out there… Not by a longshot. There were plenty of other stoves out there for much less. However, many of the cheaper ones aren’t as efficient, and require constant monitoring to make sure that they stay burning.

Since our wood stove is going to be a part of our everyday “survival,” we really wanted something as low maintenance as possible. Otherwise, it would be too tempting to just ignore it when things get busy and switch on the furnace–which totally defeats the purpose of installing a wood stove.

When it comes to items that we are going to use extensively on a daily basis, our philosophy is to spend a little more cash initially for higher-quality items that require less hands-on time in the long-run.

We’ve learned (sometimes the hard way), that it’s worth it to pay a little more at the beginning to avoid a lot of headache later on. There have been many times in our life that we’ve purchased the cheapest option out there, only to end up replacing it a year later, or wasting time on repairs and parts.

I’m pretty lucky that my hubby can pretty much fix, build, repair, or install anything, so we were able to do the whole installation ourselves. I think it ended up taking about four days–but we were pretty motivated since it was approximately a million degrees below zero outside.

After a lot of measuring and figuring, we kicked off the party by cutting a hole in the ceiling. 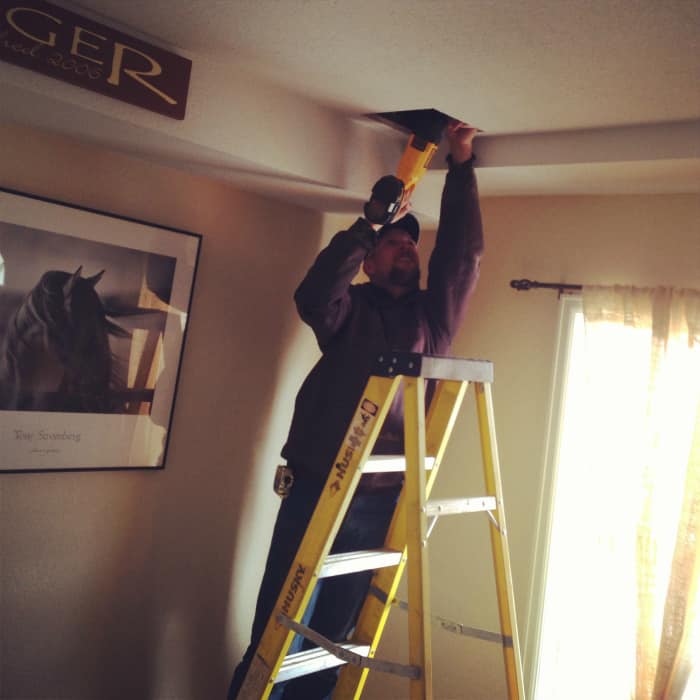 This is the part when I kinda wanted to throw up.

We didn’t know what we’d find up there, and we were praying that we wouldn’t run into floor joists or other lovely surprises.

We had a clear path. It was pretty much a miracle, and we breathed a HUGE sigh of relief.

Next, we had to figure out exactly how big our platform was going to be.

We wanted it slightly elevated (just for looks), and planned on putting up a faux brick/stone backing behind the platform and stove.

After consulting with the stove owner’s manual (it states how far it needs to be away from walls/surfaces), we put some tape on the floor, and brought the stove inside so we could figure out where exactly it needed to be. (It’s a heavy sucker… lemme tell ya.) 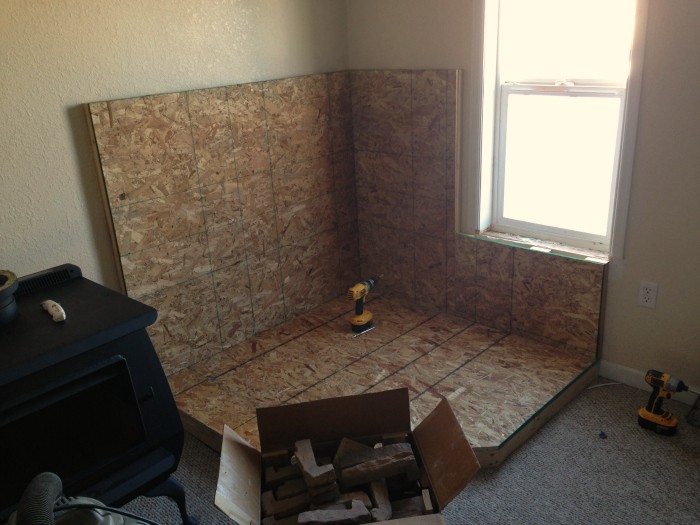 We cut the carpet out and built a wooden base with backing. This would give all the brick/stone something to stick to. 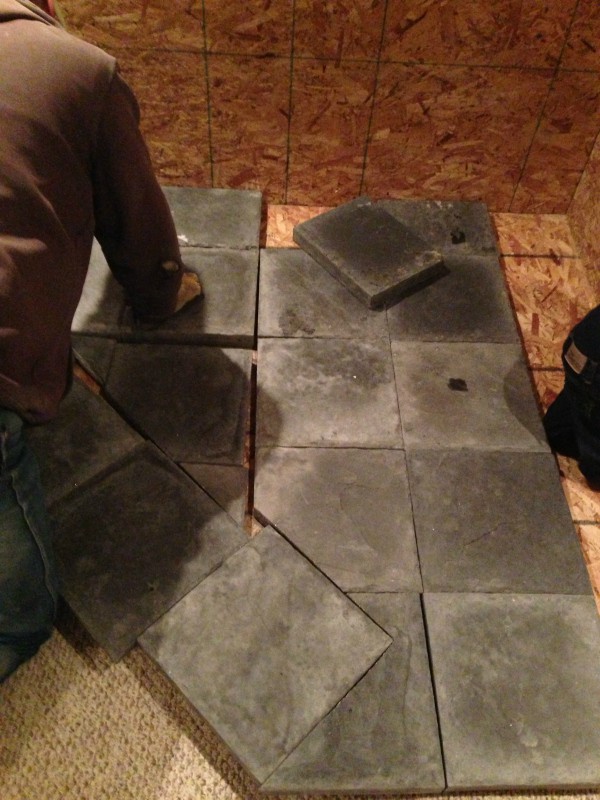 We covered the base with heavy stone pavers (the kind that folks use to make a path in their yard) for the base. Hubby took care all of the measuring and cutting–it was too much geometry for me. 😉

We settled on a fake stone veneer for the backing–it’s rustic (totally our style), AND way easier to put up than regular brick. It’s light-weight, heat-resistant, and can be cut with a hacksaw. WIN!

(It’s called AirStone– we found it at Lowe’s)

Hubby capped off the “brick” with a nice chunk of weathered, roughcut lumber that doubles as a shelf. (Not shown in this pic)

And then we arrived at the really scary part–cutting a hole in the roof… I wish I could describe this entire process to you, but I actually went and hid in the barn because I couldn’t watch… But it went off without a hitch, and we didn’t end up with any “extra” roof ventilation holes. Whew. 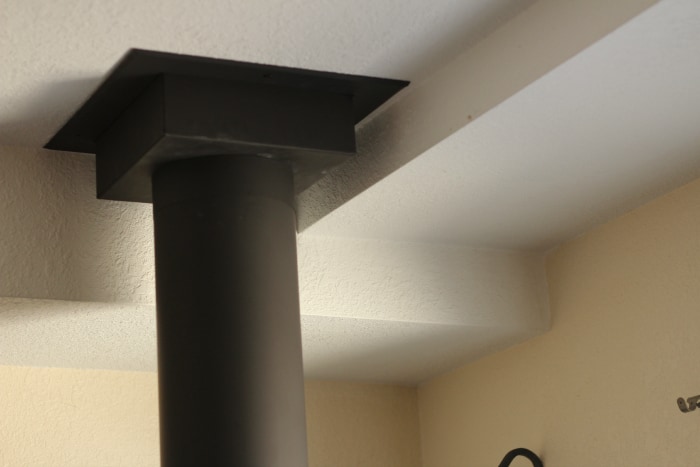 The indoor stove pipe was assembled and put into place, and we were ready for business!

The first fire in any new stove is always stinky, since you have to burn off all the factory coating, so we ended up opening all the windows for a while. 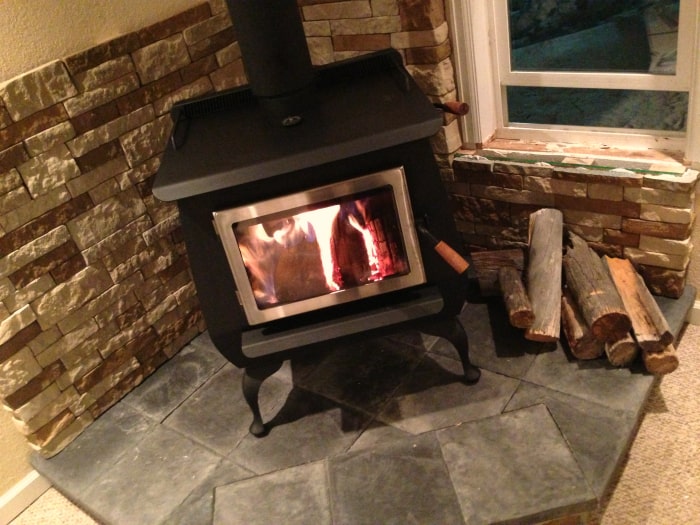 So, how’s it working?

It’s excellent! We couldn’t be happier. Our house is warmer than it’s ever been, and I’m amazed at how hands-off this stove is. We pack it full of wood in the morning, set the thermostat in the mid-range, and it goes alllll day. We repeat the process at night, and wake up with a warm house in the morning and plenty of hot coals still in the stove.

Oh! And I love this little fan we nabbed off Amazon (affiliate link) It’s been a wonderful investment, as it helps to push the heat deeper into the house. And it doesn’t use a lick of electricity– WIN!

We feel pretty darn spoiled… And now I’m secretly hoping for a good blizzard so we can hunker down by the stove and let the wind howl. 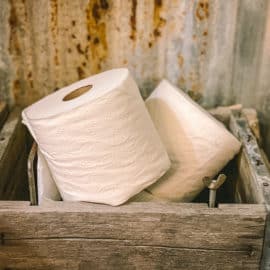 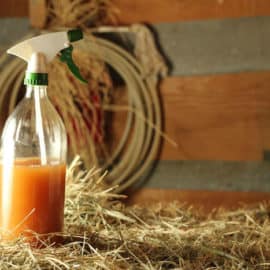 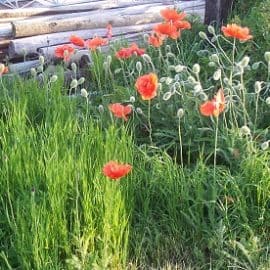