We loaded in the pickup and headed to town. Hubby made an effort to slow down as we bumped across the cattle guards, which was greatly appreciated… I tried to sit back and let all my muscles go completely limp during each contraction.

It took us an hour to reach the hospital on the snow packed roads. We passed off Prairie Girl to Grandma when we arrived. The receptionists and nurse who met us in the lobby kept asking if I wanted a wheelchair, but I refused. I had walked to the Labor & Delivery floor during labor with Prairie Girl, and I was determined to walk there on my own two feet again! I had several contractions on the way there. I stopped to breathe through each one.

I was relieved once we were finally in our room. I was ready to focus and get down to business. All the fears I had had about the hospital staff arguing with me over my birth plan were quickly dispelled. I had requested no IV, no constant monitoring, no time limits on labor, no restrictions on eating, and to be allowed to move around the room at will. The nurses were incredibly supportive of my requests and went out of their way to accommodate me. At one point I was sitting on the floor working through contractions and a nurse brought in some paperwork. She plopped down on the floor next to me and didn’t even blink.

The nurse asked if I had any special requests– I asked that no one suggest any pain medication or an epidural. I was committed to a natural birth, but I knew it would be tempting to agree to pain meds when the contractions became more intense. The nurse readily agreed, and I secretly hoped that I had not bitten off more than I could chew…

The midwife came in and asked if I wanted to be checked. I had declined any internal exams up until this point in my pregnancy, but was very curious to see how I was progressing. I was at 4 cm— not as far as I had hoped, but at least we were making progress.

For the next several hours, hubby and I were pretty much left alone. I tried various laboring positions, but no particular one was 100% comfortable. The contractions kept increasing in intensity and getting closer together. It became harder and harder to relax during each one– they were incredibly intense! I wanted to eat the snacks I had brought, but the contractions were coming so fast that I didn’t even have time to grab the lunchbox before I needed to focus through the next one. It no longer felt good to have hubby rub my back, but I did squeeze his hand hard… (And I think I may have accidentally choked him a bit while grabbing his sweatshirt…)

As the labor became more intense, things felt really surreal. I would retreat into my own little world between contractions and almost fall asleep. I don’t remember a lot of the details of this part of the process- everything was in a haze. I had originally planned to labor in different positions, but all I could manage at this point was to lay on my side propped up in the bed. The contractions were relentless and came one after another.

Sometime around this point, I started feeling some light pressure and a slight urge to push. I had never felt that with Prairie Girl since I had opted for an epidural at 7 cm. At one point, I even had the strange sensation of the baby “clunking” down into position. I knew we were getting closer, but it still felt like an eternity until I would ever be able to see this baby in person…

My midwife came in and I asked to be checked again. 9 cm… She asked if I wanted her to break my water and I said yes.

It was time to push. I started out gradually. Everyone let me do what felt right to my body. No commands of “Push! Push!” like there had been with Prairie Girl’s birth. As each contraction would peak, my body would take over. It felt like a freight train– there was no stopping it! I have heard a lot of people say that they found pushing to be a relief, but I didn’t think so. It hurt– a lot! I hollered– a lot.

We weren’t making a lot of progress… I tried turning around backwards and holding on to the back of the bed, as well as pushing on all fours. Prairie Boy was still doing great, but just wasn’t moving out. In hindsight, I don’t think my pushes were very effective at that point. Did I mention it hurt like crazy?

I finally tried sitting/half-squatting up against the back of the raised bed while pulling my legs back towards me. I originally said that I didn’t want to push in this position, but once I did, we started to make progress… To be quite honest, I didn’t care what position I was in at this point– I just wanted to be done with this whole thing!

He started to crown and it literally felt like he was on fire. It took 3-4 pushes to get him all the way out. This was definitely the most painful part of the entire process, but it only lasted a few minutes (even though it felt like an eternity). At one point I remember saying “Get him out!”, which was rather ironic since I was the only one who could really accomplish that…

At 3:56 pm on October 26th, 2012, Prairie Boy was laid on my chest. I had just gone through the most intense, most painful experience of my entire life– and survived. And I had my baby to show for it.

Since we had declined the eye ointment, Hepatitis B vaccine, and Vitamin K injection, they had no need to whisk him away. Once the cord had stopped pulsating, hubby cut it. I delivered the placenta and Prairie Boy laid on my chest, skin-to-skin, for well over an hour. After a little while, he decided to nurse and he latched on beautifully.

I was losing at bit more blood than my midwife was comfortable with, so the nurse very apologetically asked me if she could start an IV with pitocin to help the uterus contract and stop the bleeding. (I had no IV up to this point.) I had originally stated that I did not want pitocin after labor at all, but I agreed with the nurse since I think the situation warranted it. I really appreciated how respectful they were of my birth plan- I had one bag of fluids, got up to take a shower, and walked to my new room.

I had a tiny tear that required no stitches. This totally surprised me, since I had ended up with a 2nd degree tear and lots of stitches and swelling with Prairie Girl– and this was a bigger baby! When we finally weighed him, he tipped the scales at 9 lbs, 8 oz.

So… would I do it again?

Now, if you had asked me that right after I had him, my answer might not have been such a resounding yes… But as of today (exactly 2 weeks later), I would absolutely do a natural birth again.

As far as the hospital experience, I think home births are awesome and I came very close to choosing to do a home birth with Prairie Boy. However, because of the the lack of midwives in our area and our extreme distance from the hospital (if something went wrong, it would take at least 45 minutes to reach medical help), hubby and I were never 100% comfortable with that idea.

That being said, I was incredibly pleased with my hospital birth, and was so thankful to have nurses and staff who were so supportive of my wishes for a drug-free experience. It felt more like I was at a birth center instead of a typical hospital.

Natural birth was painful, and gritty, and incredibly empowering– all at the same time. It’s an amazing thing to allow your body to do the work that God designed it to do.

I’ve read some birth stories that almost seem to downplay the intensity of the whole process, and I won’t do that… At least for me– it hurt! I admire the women who can maintain their composure through the whole process, but I didn’t… I moaned, and sweated, and prayed, and hollered…

But the feeling that you get when they place that baby on your chest and you know you just accomplished something so much bigger than yourself… THAT, my friends, made it all worthwhile.

I praise You because I am fearfully and wonderfully made; Your works are wonderful, I know that full well. ~Psalm 139:14 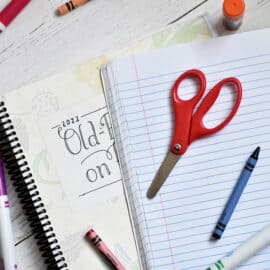 Tips for Planning Your Homeschool Year 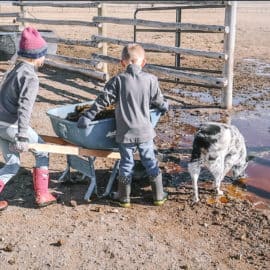 Homesteading With Kids: How We Do It 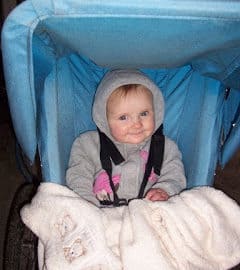