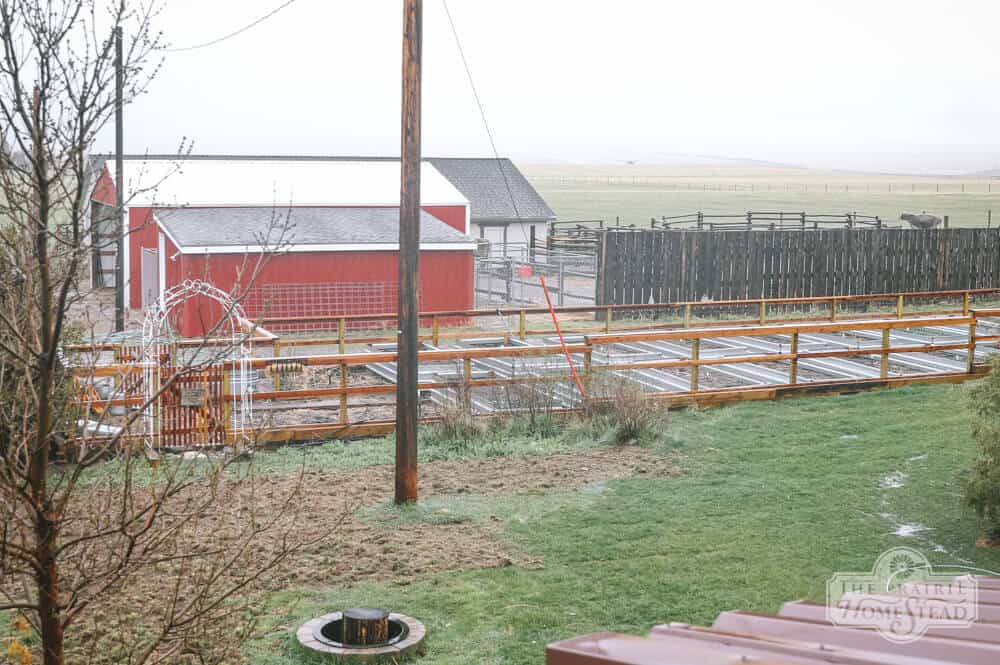 I FEEL SO BEHIND.

Except I’m not. At least not yet.

Wyoming is horribly deceiving this time of year. We’ve been getting lots of 70+ degree days the last week or two, and I’ve been spending all day outside piddling out in the garden and getting sunburns, which is quite heavenly after a long winter.

My perennials are slowly awakening. The lilacs and ash trees are budding. And the prairie land all around is gradually turning a brilliant shade of green, which is a welcome sight after months of nothing but brown.

And I’m getting all ancy because it feels like I should be planting ALL THE THINGS in the garden.

But I can’t. Because getting a full-on blizzard on Mother’s Day (or beyond) is entirely common around here.

And so I wait. And I water my tomato and pepper starts in the house. And I lurk in the garden like some sort of creepy stalker staring at the beds and making plans in my head.

It helps that our entire yard is completely torn up and in a state of utter chaos (we’re redoing the grass and adding irrigation). Well, maybe “helps” is a weird word choice, but at least the work to be done in the yard is distracting me from obsessing over my garden… Sorta.

This is our second spring with our raised bed set up, although last year we were still in construction-mode. Since we’re not tilling or heavy-mulching like years past, I had to really think about exactly how I needed and wanted to prepare my raised beds for the upcoming season.

(If you want the nitty-gritty on how we built our beds, here’s a guide I put together with all the details!)

Because I might not be able to plant right now, but I can at least get as ready as humanly possible.

So, here’s what I’ve been doing to prepare our raised beds for planting– in a couple weeks it’ll be GO TIME, baby!

How We’re Preparing Our Raised Beds for Spring Planting 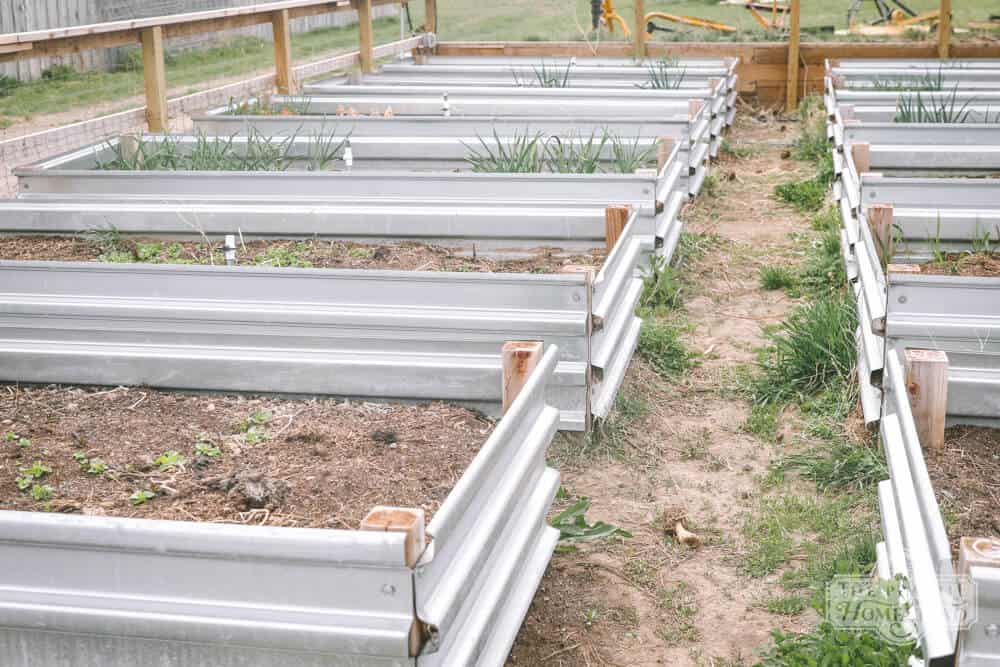 Thankfully, Christian built my raised beds to last until Armageddon, so there aren’t any repairs we need to do on the beds themselves.

However, if you have more traditional wooden beds, you may need to replace boards or reinforce the corners, as the wood will begin to decompose over time.

I stabbed one of our sprinkler lines with a pitchfork last fall when I was harvesting potatoes (yay Jill), so we  need to fix that before we turn on the water this year, but that’s really our only repair.

And, we are adding landscape fabric and mulch to the walkways to cut down on the weeds there and make it prettier.

I know some experts say you aren’t supposed to leave dead plants in the garden over the winter, but I did.

My decision was mostly made out of laziness, but I also figured leaving some of the root structures in place would help to aerate the soil and provide some organic matter that could decompose and add nutrients over the winter.

Well, at least that’s my story and I’m sticking to it.

(Bonus– the remaining tomato and cabbage roots were WAY easier to pull out after several months of decomposition.)

If you had plant diseases the year prior, I would make a point to remove and dispose of any remnants, but we had no issues of that sort last year, so I just didn’t worry about it.

Another cool bonus– my kale is actually coming back to life! I’m going to leave it and see what happens.

You don’t *have* to do this, but I highly recommend it. We did our first soil test this year and the info was super helpful and pretty much saved me from ruining my garden with too much composted manure. (Whew.)

Get all the details on soil testing here, as well as several mail-in lab recommendations.

Thanks to my soil test, I know my soil is deficient in iron, so I found some chelated iron at the local garden store. I’m going to apply that to all of my beds in the recommend dosage (which isn’t very much…)

The soil in raised beds often settles and sinks, so you may find yourself needing to add more in the spring. We didn’t need to do that this year, but I suspect we might next year.

I did add a wheelbarrow full of composted manure to each bed in the fall, so that helped add some nutrients, and increased the volume of soil in each bed.

Here are a few other ideas for improving your garden soil (whether you have raised beds or not!).

We don’t have nearly as many weeds as we used to when we did our in-ground gardening (probably because it was easier to weed last year so I stayed on top of it), but there are still a few popping up.

Since the soil in our beds is never stepped on, it’s not compacted and it makes it very simple to hoe. I’ve been hoeing each bed to mix in the compost I added last fall, and also chop up any weeds that have popped up. (Hello lambs quarters.)

You’ll want to find the right time to hoe– the soil shouldn’t be waterlogged, but you also don’t want it to be super dry, as that will make the job much more sweat-inducing.

I waited a day after a nice rain storm. The soil was damp enough to easily hoe, but not sopping wet.

After hoeing, I like to smooth out the top of the beds with my hands and remove any clumps or rocks.

Another weed removal option is covering each bed with black plastic for several weeks to kill the weed seeds. I didn’t do this this year, but it might be a good idea if your beds are overcome with weeds.

And that’s pretty much it. It almost feels too easy– is that possible? (I probably won’t be saying that once I’m in the thick of planting and weeding…) Fingers crossed we’ll have another stellar growing season this year! 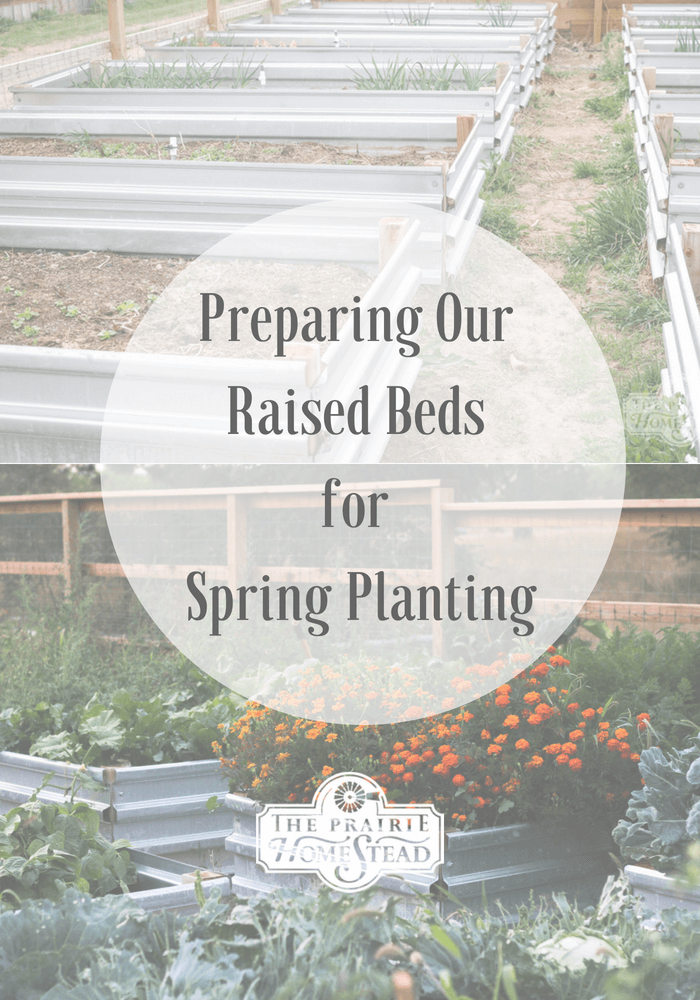 Listen to the Old Fashioned On Purpose podcast episode #3 on the topic Why We Chose To Garden In Raised Beds HERE.

What are your best tips for prepping your raised beds each spring? 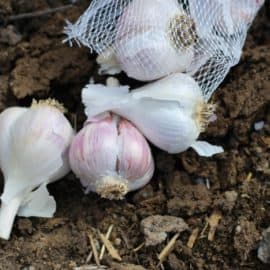 How to Plant Garlic 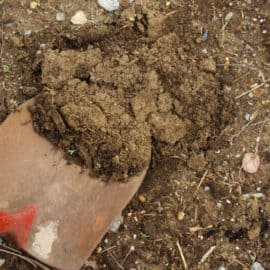 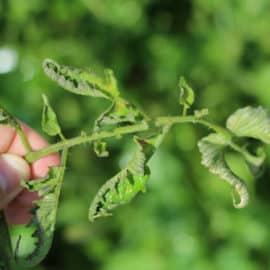