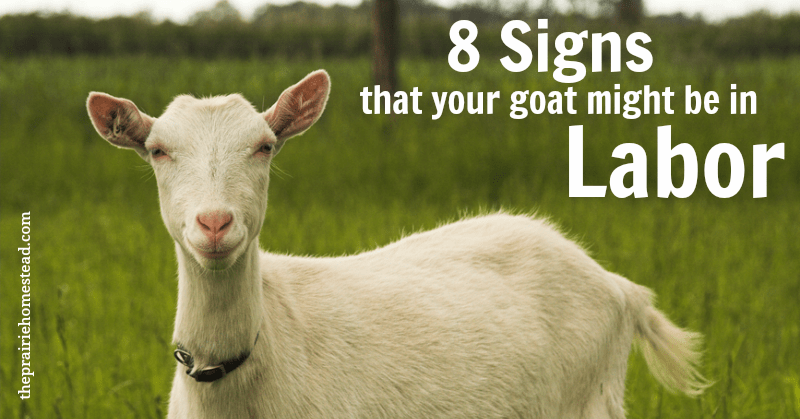 So. We all know that a goat usually kids about 150 days after being bred. That’s the easy part. The hard part is knowing WHEN you need to start staying close to the barn, and when it’s ok to head to town for a leisurely afternoon of running errands.

I am not a goat expert. However, this being my third year kidding, I feel like am I finally getting a wee bit more comfortable at being a goat midwife.

Our very first kidding season occurred when I was just a few days postpartum with Prairie Baby. It was…. mildly stressful to say the least…

Being sleep deprived and overwhelmed as a first time mama myself, I had a hard time keeping track of who was getting colostrum, whose milk had come in (including mine!), and which baby belonged where…

However, each season has been a learning experience and I know there are many first-time goat mamas out there who are anxiously awaiting their first kids this spring.

I’ve put together a list of signs that will give you a little bit of a hint as to when those much anticipated babies will arrive.

Of course, each goat is very, very different, but these signs are fairly common among most goats (notice I say *most*).

1.Their ligaments will soften 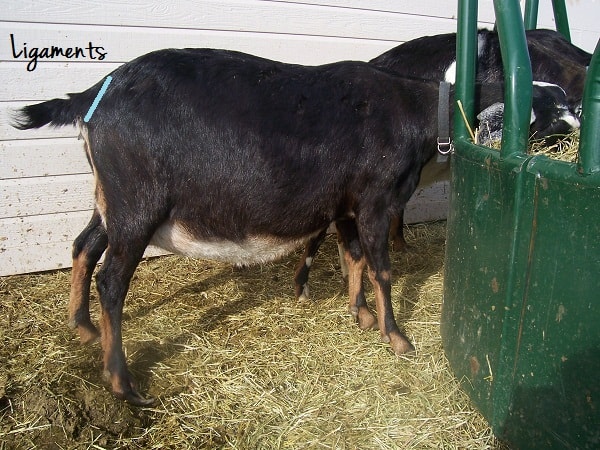 This is the sign that I monitor the most. Goats have two cord-like ligaments that run along either side of the very rear portion of their spine towards their tail. Most of the time, these ligaments are firm and feel just a bit smaller than the diameter of your little finger.

As kidding time becomes closer, these ligaments start to become soft and squishy and usually in the day or so before birth, they will disappear altogether.

When we are about a month out from the projected kidding date, I try to check these ligaments daily when I’m in the barn doing chores. It’s very helpful to know what “normal” ligaments feel like, so you can tell when they begin to change.

You can check the ligaments by slowly running your thumb and forefinger along either side of the goat’s spine towards the tail. 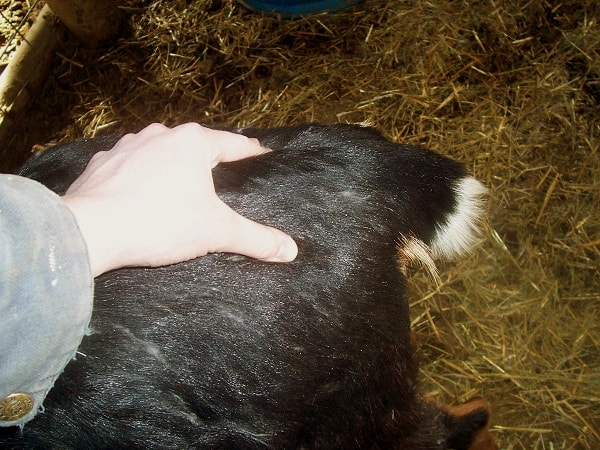 In addition to the ligaments getting soft, the whole top portion of the goat’s hindquarters will start to soften as well. As you can see from the photo, I can pinch my fingers together and almost reach completely around the goat’s tail. When things get this squishy, kidding time is getting closer! 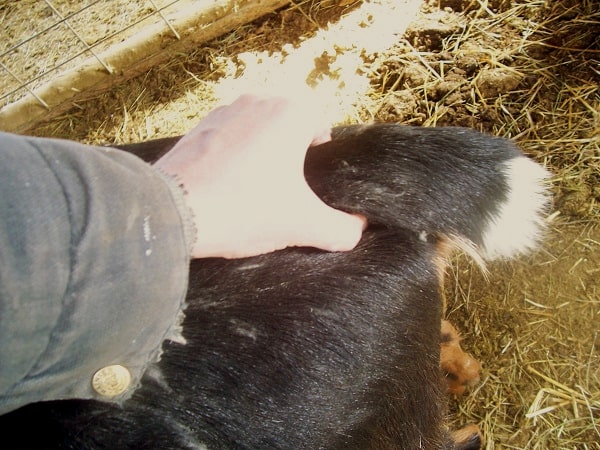 As the kidding date gets closer, I also check under their tails several times per day. When I see a thick discharge, I usually know that kidding is very close for my goats. However, I’ve heard that some goats show discharge for several weeks before going into labor, so I’m not sure how helpful this sign will be. If you see a long string of mucus, then you’ll be having goat babies very soon, so stay close to home for a while. 😉

3. Things will get a little “puffy”

When you check under their tail for discharge, check their vulva as well. As kidding time nears, it will become more loose and relaxed looking.

For most of the pregnancy, your goat will look like she is carrying her babies up high in her abdomen. However, right before birth, they kids will drop and the top of her sides will appear “hollowed out” instead of full like before.

It often seems like checking the udder is the first thing people want to do to watch for kidding, but I’ve found it can be fairly unreliable. My goats do “bag up” a little as their pregnancy progresses, but their udders (usually) don’t get full and tight until after they’ve kidded and their milk comes in. I’ve heard some people say that the udder will become big and shiny right before kidding, (It just so happened that Cinnamon when into labor 12 hours after I published this post… And her bag was very tight and shiny this time around… Go figure.)

As a goat begins to go into labor, she’ll just act “different.” She might act restless and repeatedly try laying down, only to get right back up. If you know your goat’s personality, you might notice that she just isn’t acting like herself. Perhaps she’s friendlier than normal, or even more offstandish. Usually I can just tell that “something” is going on, even if I can’t fully explain it. Sometimes their eyes seem to almost “glaze over” and they get sort of a faraway look.

I’ve seen my goats paw a lot during the first stages of labor, and sometimes even between babies.

8. Pushing head against the wall or fence

Occasionally during her labors, my goat Cinnamon will walk over to a fence or wall and press her forehead into it for a second or two. Strange, but true!

To be quite honest, I really had a hard time writing this post. It’s quite difficult to give you a list of definitive signs, since each goat is so very different! Your goats might show all of these signs– or NONE of them!

You’ll also notice that I didn’t really specify a time frame on any of the signs. Again, goat labor is a diverse thing. For example, my goats only show discharge in the immediate hours before birth, but I know other goats have mucus for weeks before the big event. The signs and their time frame are very, very different, depending on the goat.

So, my best advice would be just to go with the flow. Keep an eye on your girls to the best of your ability, but even then, you still might miss it! One other thing that I’ve found invaluable is to keep a notebook with “labor notes” from each year’s kidding. Trust me, you WILL NOT remember from year to year, and it’s incredibly helpful to be able to look back and recall the signs that each goat gave the previous year.

*Note* Due to time constraints, I am not able to respond to requests for advice in goat labor and/or birthing. Thank you for your understanding.

Some other posts in the Goat 101 Series: 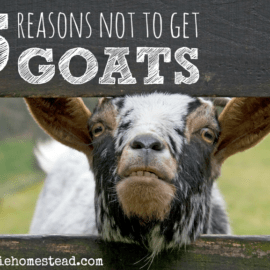 5 Reasons You Shouldn’t Get Goats 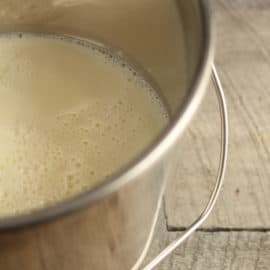 16 Possible Reasons for Off-Flavors in Milk 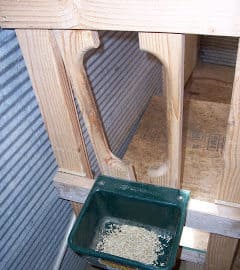 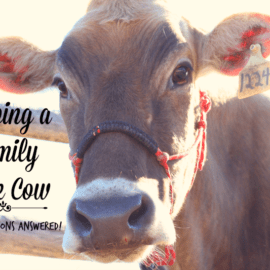